Our minds were blown back in 2012 when researchers at MIT demonstrated a new coating that let ketchup slide right out of a bottle with ease. Nine years later, the technology, known as LiquiGlide, is about to make it incredibly easy to get every last drop of toothpaste out of a tube without having to completely flatten and destroy it in the process.

Today LiquiGlide, the company spun out of MIT’s Varanasi Research Group to develop ways to manufacture and commercialize the technology, announced a new $13.5 million round of funding. But more importantly for consumers, the company also revealed a new partnership with Colgate, which will be introducing a new recyclable toothpaste container that leverages LiquiGlide so that every last drop of the product can be squeezed out with minimal effort. If there’s a mangled tube of toothpaste in your bathroom that’s still filled with impossible to reach product, you’ll understand why this is so exciting.

Chemists and engineers have known how to create superhydrophobic materials and surfaces for years, thanks in part to studying the approaches and techniques that Mother Nature has perfected. Textured surfaces featuring complex microscopic patterns will create a thin cushion of air that allows liquids to easily slide right off instead of sticking, but hydrophobic surfaces typically don’t work with thicker, viscous liquids that don’t flow as easily. Superhydrophobic materials are also often made from materials that aren’t food-safe, and over time they can degrade and become less slippery, diminishing their effectiveness.


The creators of LiquiGlide, MIT professors Kripa Varanasi and Dave Smith, came up with a better approach that solves the problem of getting all the ketchup out of a bottle. A textured pattern is applied to a given surface, which is then specially treated to change its surface chemistry. A liquid with a custom formulation is then introduced, which not only fills in all the gaps in the microscopic textures, but also creates a thin layer on the surface that is incredibly slippery. Materials that come into contact with it, like ketchup, easily glide across because they’re never actually making contact with the underlying surface material—be it metal, plastic, or glass—just that thin liquid layer.

Another advantage to LiquiGlide is that the liquid layer can be made from edible food-safe materials, and in some cases, even made from some of the ingredients in the actual food a container is designed to hold. That was the technology’s real game-changer, and also why LiquiGlide the company has been able to forge partnerships with designers like Yves Béhar and companies like Colgate-Palmolive. 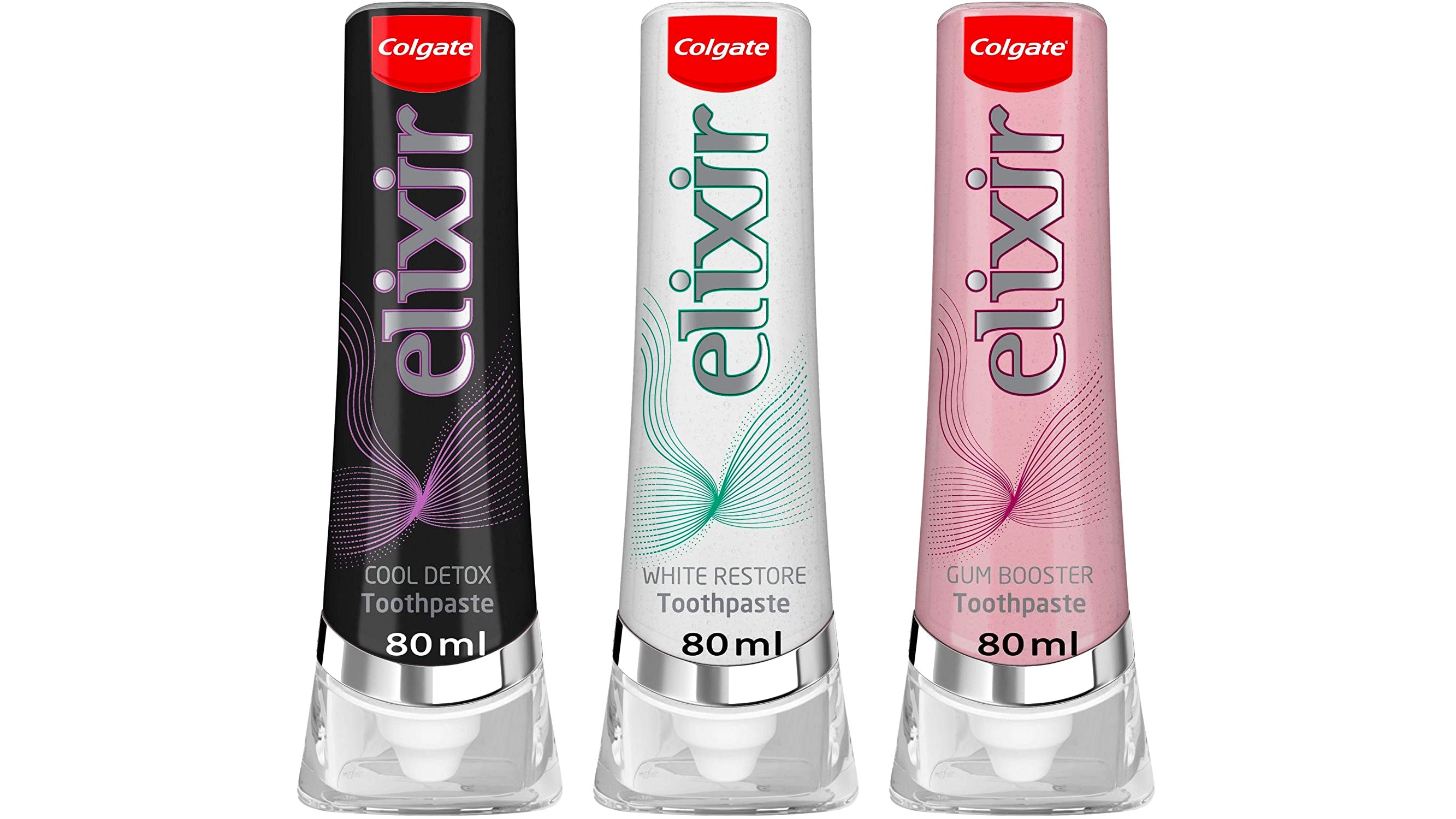 Colgate’s first products to feature LiquiGlide as part of their packaging are a new line of Elixir toothpastes that come in a see-through recyclable tube that look as beautiful as they are functional. The line features three distinct varieties, including Colgate Elixir White Restore (white) with three whitening ingredients, Colgate Elixir Gum Booster (pink) which promises improved gum and enamel care using “dual fluoride technology and hyaluronic acid,” and Colgate Elixir Cool Detox (black) which adds charcoal and coconut extracts that to supposedly make your mouth feel fresher for longer.

As beneficial as the actual toothpastes sound, the real reason to opt for Colgate’s new Elixir line is the recyclable tube. Toothpaste might be second only to ketchup as a product that, by its nature, is resistant to leaving its container. For as many variations of the design of the lowly toothpaste tube that have been released over the years, there are just as many third-party contraptions designed to squeeze out every last bit of paste—but they never do.

The new Elixir line will change that. Thanks to the integration of LiquiGlide into the packaging, gravity and some light squeezing are all that is needed to extricate every last drop from the bottle. It not only increases value for the consumer, but less wasted product is always a plus for the environment, both when it comes to streamlining the recycling process, and for reducing manufacturing demands.

Read the original article on Gizmodo.