With a new suite of tools, scientists discovered exactly how tiny plate-like catalyst particles carry out a key step in that conversion – the evolution of oxygen in an electrocatalytic cell – in unprecedented detail.

Transitioning from fossil fuels to a clean hydrogen economy will require cheaper and more efficient ways to use renewable sources of electricity to break water into hydrogen and oxygen.

But a key step in that process, known as the oxygen evolution reaction or OER, has proven to be a bottleneck. Today it’s only about 75% efficient, and the precious metal catalysts used to accelerate the reaction, like platinum and iridium, are rare and expensive.

Now an international team led by scientists at Stanford University and the Department of Energy’s SLAC National Accelerator Laboratory has developed a suite of advanced tools to break through this bottleneck and improve other energy-related processes, such as finding ways to make lithium-ion batteries charge faster. The research team described their work in Nature.

Working at Stanford, SLAC, DOE’s Lawrence Berkeley National Laboratory (Berkeley Lab) and Warwick University in the UK, they were able to zoom in on individual catalyst nanoparticles – shaped like tiny plates and about 200 times smaller than a red blood cell – and watch them accelerate the generation of oxygen inside custom-made electrochemical cells, including one that fits inside a drop of water.

They discovered that most of the catalytic activity took place on the edges of particles, and they were able to observe the chemical interactions between the particle and the surrounding electrolyte at a scale of billionths of a meter as they turned up the voltage to drive the reaction.

By combining their observations with prior computational work performed in collaboration with the SUNCAT Institute for Interface Science and Catalysis at SLAC and Stanford, they were able to identify a single step in the reaction that limits how fast it can proceed. 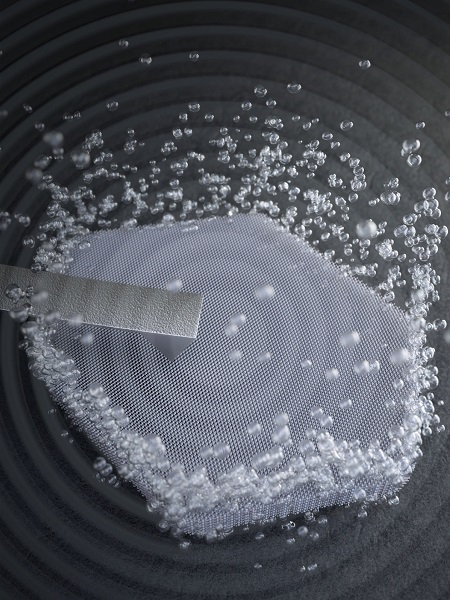 An illustration shows bubbles of oxygen rising from the edges of a six-sided, plate-like catalyst particle, 200 times smaller than a red blood cell, as it carries out a reaction called OER that splits water molecules and generates oxygen gas. The small arm at left is from an atomic force microscope. It’s one of a suite of techniques that researchers from SLAC, Stanford, Berkeley Lab and the University of Warwick brought together to study this reaction – a key step in producing clean hydrogen fuel – in unprecedented detail. The concentric rings represent the scanning transmission X-ray microscope’s Fresnel zone plate used to image the process at Berkeley Lab’s Advanced Light Source.

“This suite of methods can tell us the where, what and why of how these electrocatalytic materials work under realistic operating conditions,” said Tyler Mefford, a staff scientist with Stanford and the Stanford Institute for Materials and Energy Sciences (SIMES) at SLAC who led the research. “Now that we have outlined how to use this platform, the applications are extremely broad.”

Scaling up to a hydrogen economy

The idea of using electricity to break water down into oxygen and hydrogen dates back to 1800, when two British researchers discovered that they could use electric current generated by Alessandro Volta’s newly invented pile battery to power the reaction.

This process, called electrolysis, works much like a battery in reverse: Rather than generating electricity, it uses electrical current to split water into hydrogen and oxygen. The reactions that generate hydrogen and oxygen gas take place on different electrodes using different precious metal catalysts.

Hydrogen gas is an important chemical feedstock for producing ammonia and refining steel, and is increasingly being targeted as a clean fuel for heavy duty transportation and long-term energy storage. But more than 95% of the hydrogen produced today comes from natural gas via reactions that emit carbon dioxide as a byproduct. Generating hydrogen through water electrolysis driven by  electricity from solar, wind, and other sustainable sources would significantly reduce carbon emissions in  a number of important industries.

But to produce hydrogen fuel from water on a big enough scale to power a green economy, scientists will have to make the other half of the water-splitting reaction – the one that generates oxygen  ­– much more efficient, and find ways to make it work with catalysts based on much cheaper and more abundant metals than the ones used today.

“There aren’t enough precious metals in the world to power this reaction at the scale we need,” Mefford said, “and their cost is so high that the hydrogen they generate could never compete with hydrogen derived from fossil fuels.”

Improving the process will require a much better understanding of how water-splitting catalysts operate, in enough detail that scientists can predict what can be done to improve them. Until now, many of the best techniques for making these observations did not work in the liquid environment of an electrocatalytic reactor.

In this study, scientists found several ways to get around those limitations and get a sharper picture than ever before.

New ways to spy on catalysts

The catalyst they chose to investigate was cobalt oxyhydroxide, which came in the form of flat, six-sided crystals called nanoplatelets. The edges were sharp and extremely thin, so it would be easy to distinguish whether a reaction was taking place on the edges or on the flat surface.

About a decade ago, Patrick Unwin’s research group at the University of Warwick had invented a novel technique for putting a miniature electrochemical cell inside a nanoscale droplet that protrudes from the tip of a pipette tube. When the droplet is brought into contact with a surface, the device images the topography of the surface  and electronic and ionic currents with very high resolution.

For this study, Unwin’s team adapted this tiny device to work in the chemical environment of the oxygen evolution reaction. Postdoctoral researchers Minkyung Kang and Cameron Bentley moved it from place to place across the surface of a single catalyst particle as the reaction took place.

“Our technique allows us to zoom in to study extremely small regions of reactivity,” said Kang, who led out the experiments there. “We are looking at oxygen generation at a scale more than one hundred million times smaller than typical techniques.”

They discovered  that, as is often that case for catalytic materials, only the edges were actively promoting the reaction, suggesting that future catalysts should maximize this sort of sharp, thin feature.

Meanwhile, Stanford and SIMES researcher Andrew Akbashev used electrochemical atomic force microscopy to determine and visualize exactly how the catalyst changed shape and size during operation, and discovered that the reactions that initially changed the catalyst to its active state were much different than had been previously assumed. Rather than protons leaving the catalyst to kick off the activation, hydroxide ions inserted themselves into the catalyst first, forming water inside the particle that made it swell up. As the activation process went on, this water and residual protons were driven back out.

In a third set of experiments, the team worked with David Shapiro and Young-Sang Yu at Berkeley Lab’s Advanced Light Source and with a Washington company, Hummingbird Scientific, to develop an electrochemical flow cell that could be integrated into a scanning transmission X-ray microscope. This allowed them to map out the oxidation state of the working catalyst – a chemical state that’s associated with catalytic activity – in areas as small as about 50 nanometers in diameter.

“We can now start applying the techniques we developed in this work toward other electrochemical materials and processes,” Mefford said. “We would also like to study other energy-related reactions, like fast charging in battery electrodes, carbon dioxide reduction for carbon capture, and oxygen reduction, which allows us to use hydrogen in fuel cells.”