Scientists suggested that magnetic graphene can be the ultimate choice for the 2D spin-logic devices as it efficiently converts the charge to spin current and can transfer this strong spin-polarization over long distances.

In spintronics, the magnetic moment of electrons (spin) is used to transfer and manipulate information. An ultra-compact 2D spin-logic circuitry could be built from 2D materials that can transport the spin information over long distances and also provide strong spin-polarization of charge current.

Experiments by physicists at the University of Groningen (The Netherlands) and Columbia University (USA) suggest that magnetic graphene can be the ultimate choice for these 2D spin-logic devices as it efficiently converts charge to spin current and can transfer this strong spin-polarization over long distances. This discovery was published on 6 May in Nature Nanotechnology.

Spintronic devices are promising high-speed and energy-saving alternatives for the current electronics. These devices use magnetic moment of electrons so-called spins (‘up’ or ‘down’) to transfer and store information. The ongoing scaling down of memory technology requires ever smaller spintronic devices and thus it seeks for atomically thin materials that can actively generate large spin signals and transfer the spin information over micrometre-long distances.

For over a decade, graphene has been the most favourable 2D material for the transport of the spin information. However, graphene cannot generate spin current by itself unless its properties are appropriately modified. One way to achieve this is to make it act as a magnetic material. The magnetism would favour the passage of one type of spin and thus create an imbalance in the number of electrons with spin-up versus spin-down. In magnetic graphene this would result in a highly spin-polarized current.

This idea had now been experimentally confirmed by the scientists in the Physics of Nanodevices group led by prof. Bart van Wees at the University of Groningen, Zernike institute for advanced materials. When they brought graphene in close proximity to a 2D layered antiferromagnet, CrSBr, they could directly measure a large spin-polarization of current, generated by the magnetic graphene.

In the conventional graphene-based spintronic devices, ferromagnetic (cobalt) electrodes are used for injecting and detecting the spin signal into graphene. In contrast, in circuits built from magnetic graphene, the injection, transport and detection of the spins all can be done by the graphene itself, explains Talieh Ghiasi, first author of the paper. ‘We detect an exceptionally large spin-polarization of conductivity of 14% in the magnetic graphene that is also expected to be efficiently tuneable by a transverse electric field.’ This, together with the outstanding charge and spin transport properties of graphene allows for realization of all-graphene 2D spin-logic circuitries where the magnetic graphene alone can inject, transport and detect the spin information.

Moreover, the unavoidable heat dissipation that happens in any electronic circuitry is turned to an advantage in these spintronic devices. ‘We observe that the temperature gradient in the magnetic graphene due to the Joule heating is converted to spin current. This happens by the spin-dependent Seebeck effect that is also observed in graphene for the first time in our experiments,’ says Ghiasi. The efficient electrical and thermal generation of spin currents by the magnetic graphene promises substantial advances both for the 2D spintronic and spin-caloritronic technologies. 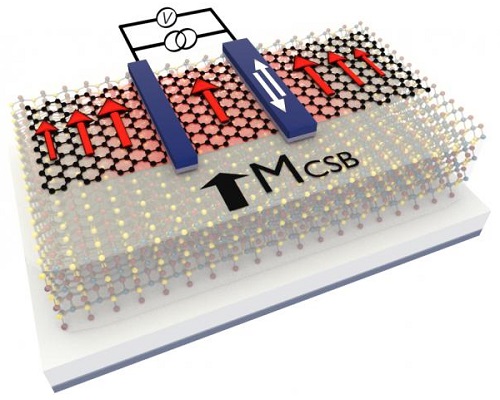 Simplified schematic picture of the studied device, showing electrical and thermal generation of spin currents in a bilayer graphene/CrSBr heterostructure. The magnetic Co electrodes are used to determine the degree of proximity induced spin polarization in the bilayer graphene, where the magnetization of the outer-most layer of CrSBr (Mcsb) allows for higher conductivity of the spin-up electrons (red arrows).

The spin transport in graphene, furthermore, is highly sensitive to the magnetic behaviour of the outer-most layer of the neighbouring antiferromagnet. This implies that, such spin transport measurements enable read-out of the magnetisation of a single atomic layer. Thus, the magnetic graphene-based devices not only address the most technologically-relevant aspects of magnetism in graphene for the 2D memory and sensory systems, but also provide further insight into the physics of magnetism.

The future implications of these results will be investigated in the context of the EU Graphene Flagship, which works towards new applications of graphene and 2D materials.