Micro-engineered, bioinspired design allows the material to collect moisture from cool fog as well as generating and collecting steam under sunny conditions.

Tiny structures inspired by the shape of cactus spines allow a newly created material to gather drinkable water from the air both day and night, combining two water-harvesting technologies into one.

The material, a micro-architected hydrogel membrane (more on that later), can produce water through both solar steam-water generation and fog collection—two independent processes that typically require two separate devices. A paper about the material was published in Nature Communications on May 14.

Fog collection is exactly what it sounds like. At night, low-lying clouds along sea coasts are heavy with water droplets. Devices that can coalesce and collect those droplets can turn fog into drinking water. Solar-steam generation is another water-collection technique. It works especially well in coastal areas because it is also capable of water purification, though it works during the day instead of at night. In the method, heat from the sun causes water to evaporate into steam, which can be condensed into drinking water.

Because the two technologies operate under such different conditions, they typically require different materials and devices to make them work. Now, a material developed at Caltech could combine them into a single device, working to generate clean water 24 hours a day.

"Water scarcity is a huge issue that humanity will need to overcome as the world's population continues to grow," says Julia R. Greer, the Ruben F. and Donna Mettler Professor of Materials Science, Mechanics and Medical Engineering and Fletcher Jones Foundation Director of the Kavli Nanoscience Institute. "Water covers three-quarters of the globe, but only about one half of one percent is available freshwater."

Greer has spent her career developing micro- and nano-architected materials; that is, materials whose very shapes (controlled at each length scale, nanoscopic and microscopic) give them unusual and potentially useful properties. In this case, Greer collaborated with Ye Shi, formerly a postdoctoral scholar at Caltech and now a postdoctoral scholar at UCLA, to create a membrane of arrayed tiny spines that resemble Christmas trees but are in fact inspired by the shape of cactus spines. 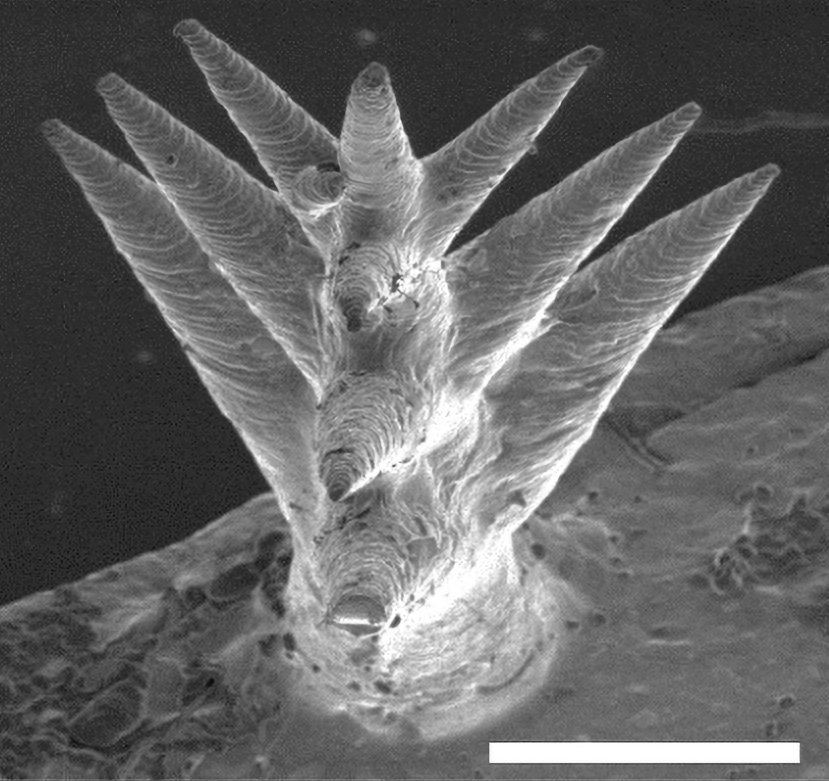 "Cacti are uniquely adapted to survive dry climates," Shi says. "In our case, these spines, which we call 'micro-trees,' attract microscopic droplets of water that are suspended in the air, allowing them to slide down the base of the spine and coalesce with other droplets into relatively heavy drops that eventually converge into a reservoir of water that can be utilized."

The spines are built out of a hydrogel; that is, a network of hydrophilic (water-loving) polymers that naturally attract water. Due to their tiny size, they can be printed onto a wafer-thin membrane. During the day, the hydrogel membrane absorbs sunlight to heat up water trapped beneath it, which becomes steam. The steam then recondenses onto a transparent cover, where it can be collected. During the night, the transparent cover folds up and the hydrogel membrane is exposed to humid air to capture fog. As such, the material can harvest water from both steam and fog.

In an operation test conducted during the night, samples of the materials ranging from 55–125 square centimeters in area were able to collect about 35 milliliters of water from fog. In tests during the day, the material was capable of collecting about 125 milliliters from solar steam.

The exact design of the membrane was created using the design program SolidWorks.

The hydrogel itself is a polyvinyl alcohol/polypyrrole (PVA/PPy) composite gel, a non-toxic and flexible material used in numerous applications including in capacitors, wearable strain and temperature sensors, and batteries. To fine-tune the design of the micro-trees, Greer and Shi worked with Caltech's Harry Atwater, Howard Hughes Professor of Applied Physics and Materials Science; and Ognjen Ilic, formerly a postdoctoral scholar at Caltech and now Benjamin Mayhugh Assistant Professor of Mechanical Engineering at the University of Minnesota.

Using computer modeling, Ilic computed the heat distribution within the micro-trees to help define the size and shape that would be most effective at drawing water from the air. With this successful proof-of-concept, the team now hopes to find a private partner capable of commercializing the technology for water-scarce regions.

"It is really inspiring that a relatively simple hydrophilic polymer membrane can be shaped in a morphology that resembles cacti spines and be capable of tremendous enhancement in water collection. I guess evolution really works," Greer says.

The Nature Communications paper is titled "All-day Fresh Water Harvesting by Microstructured Hydrogel Membranes." This work was supported by the Resnick Sustainability Institute, the Caltech Space Solar Power Project, the Joint Center for Artificial Photosynthesis (a U.S. Department of Energy Energy Innovation Hub), and served as a foundation for Greer's subsequent Defense Advanced Research Projects Agency grant for the "Atmospheric Water Extraction" program, which is a collaboration with the University of Texas Austin and MIT.

Read the original article on Caltech.