Nanoparticles: The Complex Rhythm of Chemistry

Nanoparticles are often used as catalysts. The chemical reactions on their surface are more complex than previously thought, experiments at TU Wien (Vienna) show.

Most of commercial chemicals are produced using catalysts. Usually, these catalysts consist of tiny metal nanoparticles that are placed on an oxidic support. Similar to a cut diamond, whose surface consists of different facets oriented in different directions, a catalytic nanoparticle also possesses crystallographically different facets - and these facets can have different chemical properties.

Until now, these differences have often remained unconsidered in catalysis research because it is very difficult to simultaneously obtain information about the chemical reaction itself and about the surface structure of the catalyst. At TU Wien (Vienna), this has now been achieved by combining different microscopic methods: with the help of field electron microscopy and field ion microscopy, it became possible to visualize the oxidation of hydrogen on a single rhodium nanoparticle in real time at nanometer resolution. This revealed surprising effects that will have to be taken into account in the search for better catalysts in the future. The results have now been presented in the scientific journal "Science". 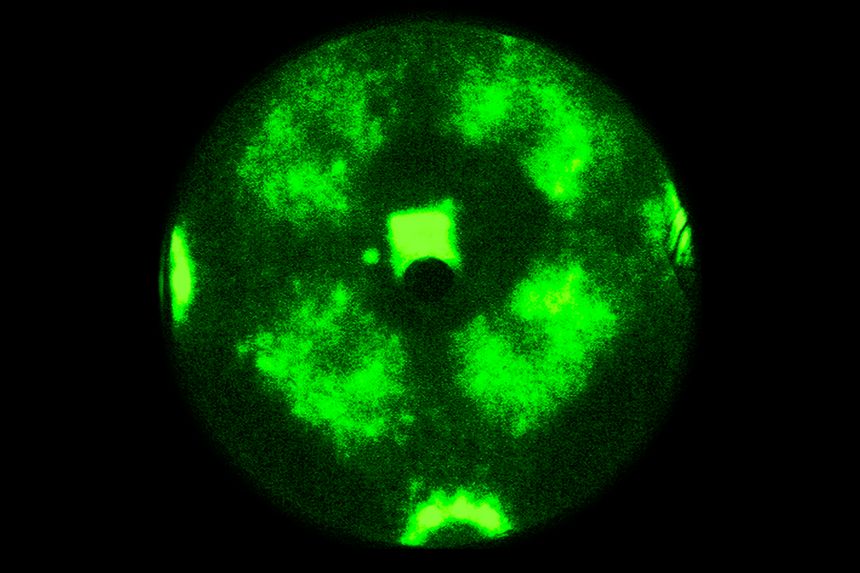 The chemical reaction moves across the nanoparticle like a wave. 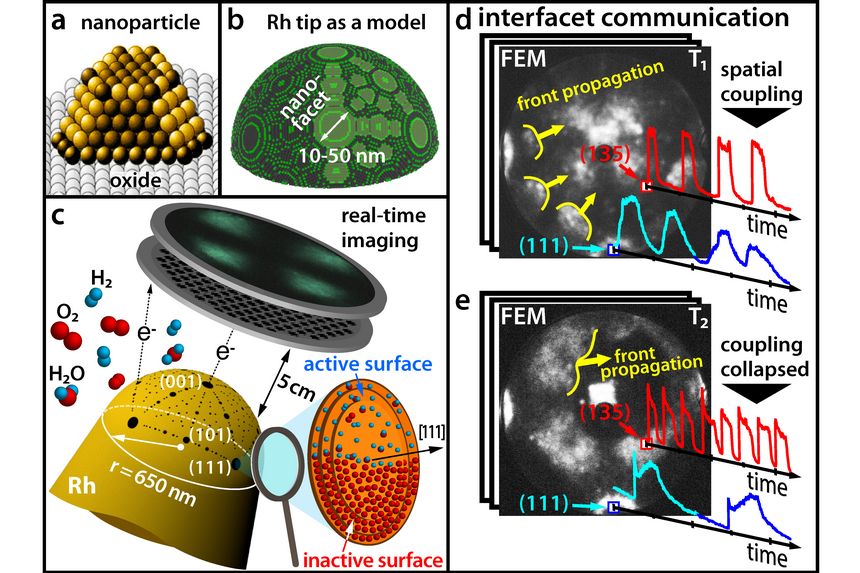 Modern catalysts consist of nano particles; (b) a rhodium tip as model of a nanoparticle; (c) real-time monitoring of a reaction using a field electron microscope; (d) at low temperatures oszillations on different nanofacets are synchronized; (e) at higher temperatures the spatial coupling col lapses: desynchronization

The rhythm of chemical reactions

"In certain chemical reactions, a catalyst can periodically switch back and forth between an active and an inactive state," says Prof. Günther Rupprechter from the Institute of Materials Chemistry at TU Wien. "Self-sustaining chemical oscillations can occur between the two states – the chemist Gerhard Ertl received the Nobel Prize in Chemistry for this discovery in 2007."

This is also the case with rhodium nanoparticles, which are used as a catalyst for hydrogen oxidation – the basis of every fuel cell. Under certain conditions, the nanoparticles can oscillate between a state in which oxygen molecules dissociate on the surface of the particle and a state in which hydrogen is bound.

"When a rhodium particle is exposed to an atmosphere of oxygen and hydrogen, the oxygen molecules are split into individual atoms at the rhodium surface. These oxygen atoms can then migrate below the uppermost rhodium layer and accumulate as the subsurface oxygen there," explains Prof. Yuri Suchorski, the first author of the study.

Through interaction with hydrogen, these stored oxygen atoms can then be brought out again and react with hydrogen atoms. Then, there is again room for more oxygen atoms inside the rhodium particle and the cycle starts again. "This feedback mechanism controls the frequency of the oscillations", says Yuri Suchorski.

Until now, it was thought that these chemical oscillations always took place synchronously in the same rhythm over the entire nanoparticle. After all, the chemical processes on the different facets of the nanoparticle surface are spatially coupled, as the hydrogen atoms can easily migrate from one facet to the adjacent facets.

However, the results of the research group of Prof. Günther Rupprechter and Prof. Yuri Suchorski show that things are actually much more complex: Under certain conditions, the spatial coupling is lifted and adjacent facets suddenly oscillate with significantly different frequencies - and in some regions of the nanoparticle, these oscillating "chemical waves" do not propagate at all.

"This can be explained on an atomic scale," says Yuri Suchorski. "Under the influence of oxygen, protruding rows of rhodium atoms can emerge from a smooth surface." These rows of atoms can then act as a kind of "wave breaker" and hamper the migration of hydrogen atoms from one facet to another - the facets become decoupled.

A hemisphere tip as a nanoparticle model

The key to unravelling this complex chemical behaviour lays in using a fine rhodium tip as a model for a catalytic nanoparticle. An electric field is applied, and due to the quantum mechanical tunnelling effect, electrons can leave the tip. These electrons are accelerated in the electric field and hit a screen, where a projection image of the tip is then created with a resolution of around 2 nanometers.

In contrast to scanning microscopies, where the surface sites are scanned one after the other, such parallel imaging visualizes all surface atoms simultaneously - otherwise it would not be possible to monitor the synchronization and desynchronization of the oscillations.

The new insights into the interaction of individual facets of a nanoparticle can now lead to more effective catalysts and provide deep atomic insights into mechanisms of non-linear reaction kinetics, pattern formation and spatial coupling.