Imperial researchers have designed drug delivery nanocapsules that could reduce the side effects of a major blood clot dissolving drug.

Tested on human blood in the lab, the selective nanocapsules could reduce the side effects of a major blood clot dissolving drug, which include bleeding on the brain. If confirmed with animal tests, the nanocapsules could also make the drug more effective at lower doses.

Blood clots, also known as thrombi, are a key cause of strokes and heart attacks which are leading causes of death and ill-health worldwide. They can be treated with a clot dissolving drug called tissue plasminogen activator (tPA) which disrupts clots to clear the blocked blood vessel and re-establish blood flow.

However, tPA can cause life-threatening off-target bleeding, and lasts only a few minutes in circulation, so often requires repeated doses, which further increases the risk of bleeding. Consequently, it is only used for a minority of potentially eligible patients.

Now, researchers at Imperial College London have found that by encasing tPA in newly designed tiny capsules, it can be targeted more specifically to harmful blood clots with an increased circulation time. They designed the nanocapsules to attach to activated platelets present in thrombi, release the tPA payload and dissolve clots.

The findings are published in Science Advances.

Lead author Dr Rongjun Chen of Imperial’s Department of Chemical Engineering said: “tPA has a narrow window between desired effect and side effects, so we have wrapped it in a package that extends this therapeutic window and minimises the required dose. Our results are exciting but animal and clinical studies are required for validation.”

Blood clots are made of blood cells called platelets which link together when activated. These platelets are held together with proteins called fibrinogen which bind to activated platelets and form ‘bridges’ between them. The new nanocapsule, called tPA-cRGD-PEG-NV, mimics fibrinogen so that it seeks out clots within blood vessels.

The researchers tested this on healthy human blood under both static conditions, where still blood was tested in petri dishes, and physiological flow conditions in a simulated blood vessel. To test flow conditions, they designed a computer model to simulate how the encapsulated tPA might act in circulating blood.

They found that the nanocapsules were highly selective in binding to activated platelets and that the time it took to dissolve clots was similar to that with unencapsulated tPA.

Co-corresponding author Professor Xiao Yun Xu of Imperial’s Department of Chemical Engineering said: “We combined experimental and computational work to characterise this nanocapsule. To build our computer model we needed a mechanistic understanding of the interplay between the physical and biochemical processes of blood clot dissolving. The model could be very useful in animal and clinical trials of this potential nanomedicine, as well as in predicting optimal dosing for patients.”

The purpose-built computer model was able to simulate nanocapsule transport to the clot site, its release of tPA, and its dissolution of clots. Professor Xu added: “Our simulation illustrated the potential in predicting the outcome of blood clot treatments in clinically relevant scenarios.” 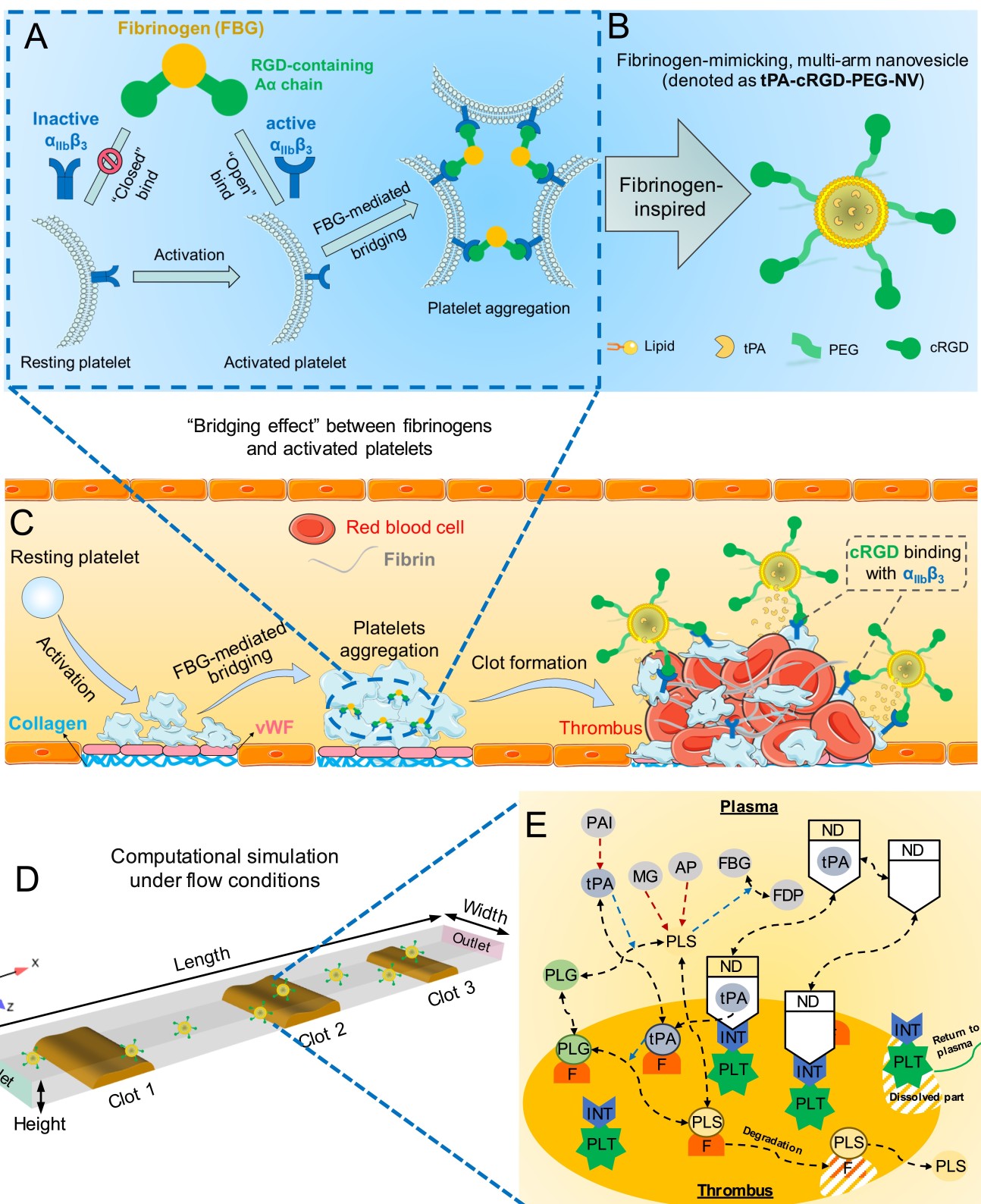 Co-author Professor Simon Thom of Imperial’s National Heart and Lung Institute said: “We’ve found a way to make a clot-busting drug more precisely targeted, potentially enhancing efficacy and reducing catastrophic side effects. This promising work paves the way for safer delivery of drugs with otherwise harmful side effects and demonstrates the activity of nano-encapsulated tPA in a laboratory setting. Research is now needed in whole organisms to determine the capsule’s effectiveness in a more realistic setting.”

Next the researchers will test the encapsulated tPA in animals to see how it performs in whole organisms, especially for increasing circulation time and checking the computer model’s ability to predict clot busting in a realistic setting. Dr Chen added: “Once fully validated, the selective nanocapsules and the computer model could serve as powerful platforms for developing clot-busting nanomedicines.”