A Blueprint for Designing and Synthesizing New, Multifunctional Materials

Nanocrystals are a type of inorganic nanoparticle, defined as any material with at least one dimension smaller than 100 nanometers. While nanocrystals have been used to create new types of devices, from digital displays to medical diagnostics, ongoing challenges related to their synthesis, characterization, and combining different types of nanocrystals into a single material need to be addressed to create new materials for more complex applications. 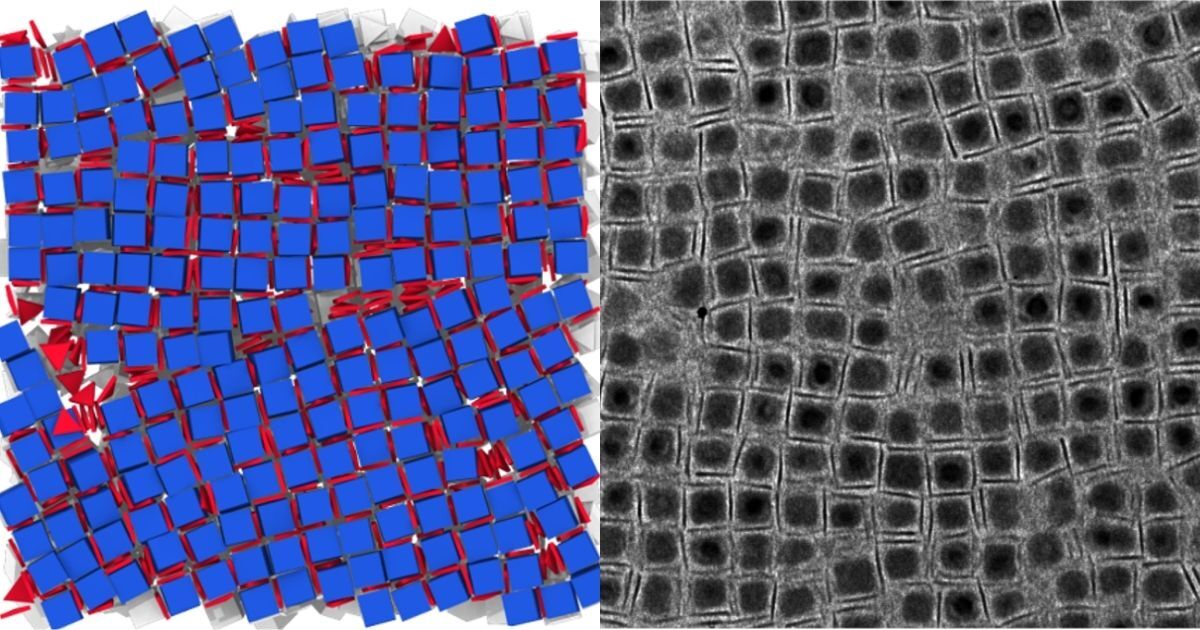 A simulation of a nanocrystal (left) next to the transmission electron microscopy (TEM) image of what was created in the lab.

Now, a new paper in Science Advances, provides a blueprint for designing multifunctional materials using different combinations of nanocrystals. By bringing together theory, computational simulations, chemical synthesis, and assembly, researchers from the University of Pennsylvania and the University of Michigan demonstrate how an “inverse design” strategy can create unique materials from nanocrystals of varying compositions, sizes, and shapes. This work is an essential step towards establishing a “blueprint” for synthesizing new materials with unique properties.

One of the challenges of using nanocrystals is finding ways to combine building blocks with different properties or chemical structures together to make something new. “It’s one of those problems where ‘like likes like,’” says recent Ph.D. graduate Katherine Elbert, who led this study while working in the lab of Penn Integrates Knowledge Professor Christopher Murray. “The different sizes and shapes of nanocrystals often segregate to form heterogeneous aggregates rather than ordered solids. Here, we’re trying to overcome that barrier and make materials in which the nanocrystals are precisely coupled to their neighbors to hybridize their properties.”

One of the greatest challenges in the area of research is the sheer number and types of nanocrystals. With massive libraries of nanocrystals that have varying chemical formulas, sizes, and shapes, it’s difficult for researchers to know exactly where to start. Searching such a large chemical space efficiently and systematically requires a multidisciplinary approach, which was made possible by a long-running collaboration between Murray and Sharon Glotzer’s computational modeling group at the University of Michigan. Their collaboration aims to establish design rules and to create blueprints that bring together multiple properties simultaneously.

“When dealing with complex, multicomponent architectures, putting each ‘brick’ exactly in the right place would be insurmountable,” says Murray. “But if you can find the rules by which nature wants to assemble nanocrystals and you know how to optimize the conditions and the precise design of blocks, you now have that blueprint for making different classes of materials.” 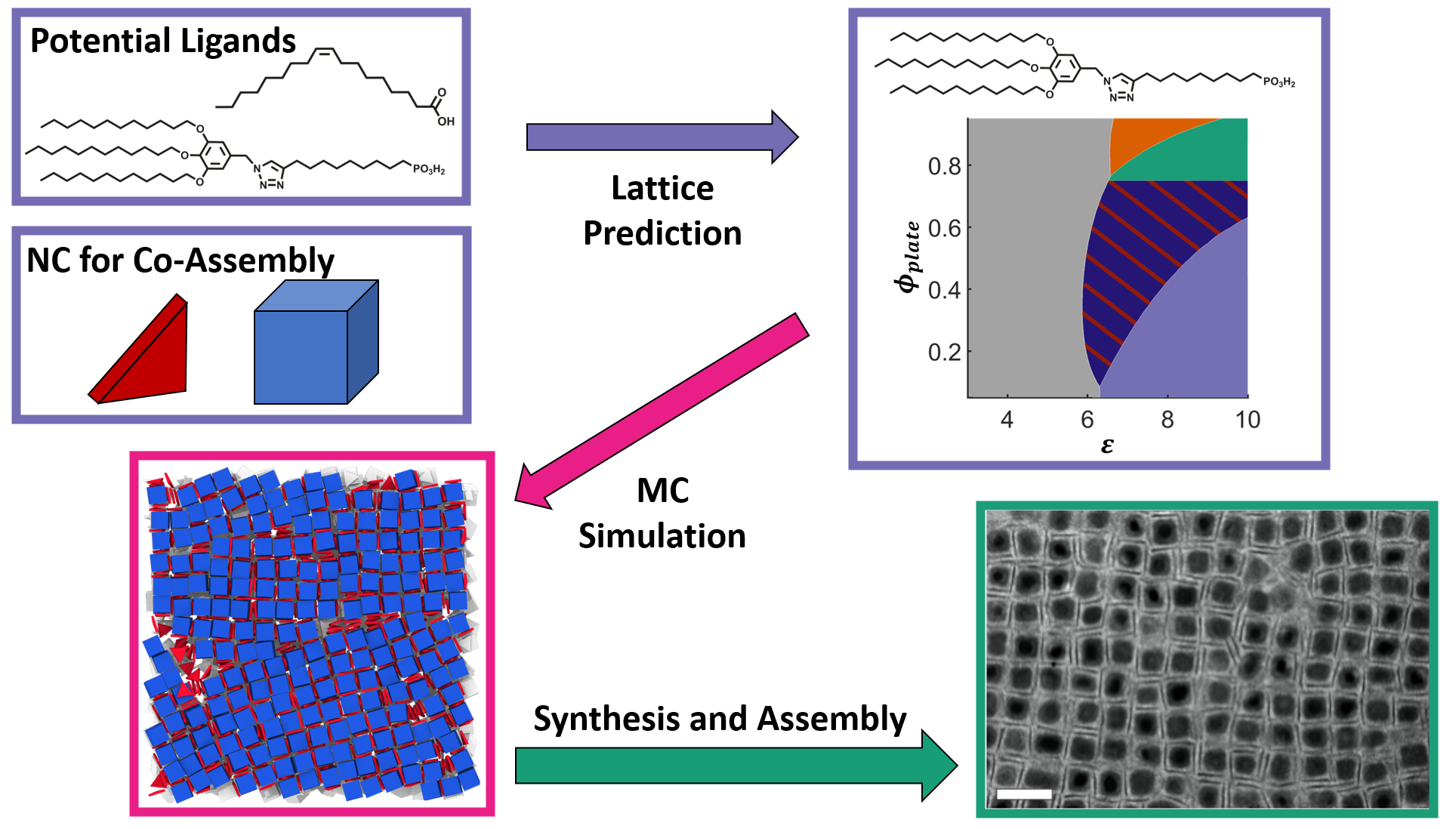 Schematic of the “inverse design” strategy, which shows how lattice prediction methods (shown in purple in the top right figure) lead to a set of parameters for co-assembly that are then verified by computation (pink) and realized experimentally (green).

Building off their previous work, the researchers harnessed the library of nanocrystals synthesized in the Murray lab and the simulations of the Glotzer lab to tune the nanocrystal coating rather than the particles themselves. “These building blocks intrinsically dislike each other predominantly due to incompatibilities in their shape,” says postdoctoral researcher Thi Vo of Michigan. “But switching out a particle’s ligand coating alters its effective shape, and we can leverage those subtle changes to drive assembly as opposed to segregation.”

Michigan researchers modeled interactions between pairs of nanocrystals to see how they might create different desired structures through self-assembly, the process of a disorganized mixture arranging itself into a more ordered structure naturally. Then, once this theoretical framework was in place, the researchers could see what sizes, shapes, material types, and chemical environments were the most promising for follow-up experiments in the lab. “Our previous work produced validated theoretical models whose inputs are essentially parameters you would typically come up with in an experiments. All we have to do now is screen through what Chris has readily available in his toolbox and pick the best ones for the job,” says Vo.

This study focused on two classes of infrared active nanocrystals with vastly different compositions, sizes, and structures that typically segregate when mixed. Using specialized lab techniques developed by the Murray group, the researchers showed that they could form a mixed and stable film made of these two nanocrystals, which have added to the previously limited number of demonstrated examples of multicomponent nanocrystal solids.

One surprising result was the importance of surface molecule modifications in helping nanocrystals assemblies. Typically, surface molecules are added to help stabilize the nanocrystals, Elbert says, but in this study the researchers found that they also help two different nanocrystals assemble with one another. “That was the trick in unlocking certain structures and overcoming different issues that we were having, and what’s on the nanocrystal’s surface can really make a difference for designing these multicomponent systems,” says Elbert.

The approach described in this study is also universal in that these results can be applied to other types of materials with only minor adjustments. The researchers refer to their blueprint as an “inverse design” approach, one that relies on theory and observations to guide experiments to find nanocrystal combinations that imbue materials with new properties.

“You start off asking what’s experimentally viable, and it’s a feedback loop where the theory is what guides the project, but you’re constantly going back and forth to optimize,” Elbert explains about the framework. “We’re hoping that this thinking enables you to use that rational design approach on other types of materials sets or combinations.”

Researchers in the Murray lab are already busy using this new blueprint as they synthesize and experiment with new types of nanocrystals. Their long-term goal is to develop and use strategies that help materials scientists more efficiently delve into the rich space of nanocrystals in a way that enables them to create valuable and viable materials in the future.

“This is the best example to date of the interplay between computational design and experimental execution, and it helps us understand the path we need to get to a goal of nanoscale multifunctional materials,” Murray says about the group’s latest paper. “By building nanoscale components and organizing them under a universal set of conditions, we can get materials properties that don’t coexist or are exceedingly difficult to bring together. Now, we have a strategy to get the nanocrystals to couple and overlap.”