Scientific studies describing the most basic processes often have the greatest impact in the long run. A new work by Rice University engineers could be one such, and it’s a gas, gas, gas for nanomaterials.

Knowing how the process works will give scientists and engineers a way to optimize the bulk manufacture of MoS2 and other valuable materials classed as transition metal dichalcogenides (TMDs), semiconducting crystals that are good bets to find a home in next-generation electronics.

Their study in the American Chemical Society journal ACS Nano focuses on MoS2’s “pre-history,” specifically what happens in a CVD furnace once all the solid ingredients are in place. CVD, often associated with graphene and carbon nanotubes, has been exploited to make a variety of 2D materials by providing solid precursors and catalysts that sublimate into gas and react. The chemistry dictates which molecules fall out of the gas and settle on a substrate, like copper or silicone, and assemble into a 2D crystal.

The problem has been that once the furnace cranks up, it’s impossible to see or measure the complicated chain of reactions in the chemical stew in real time. 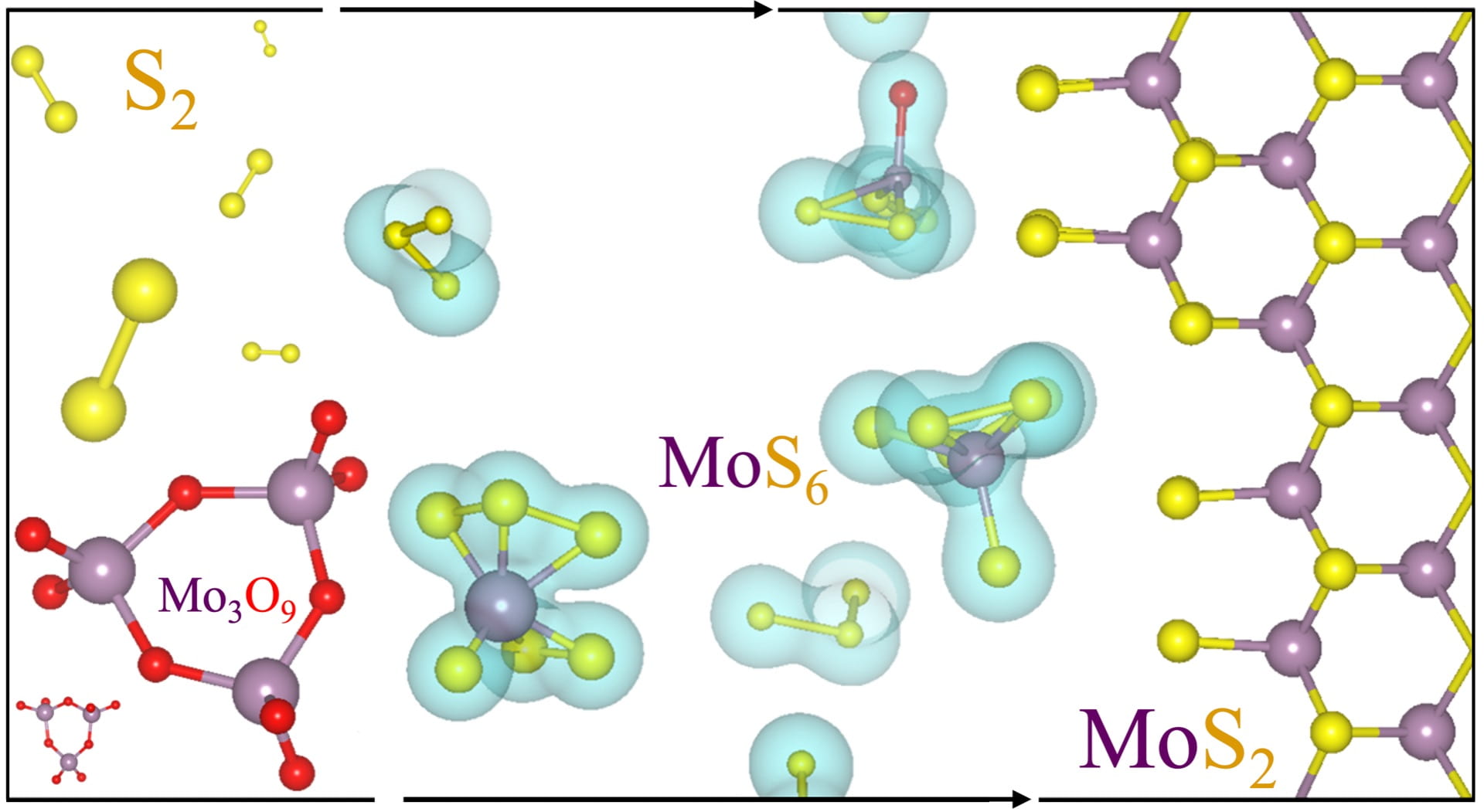 Three gas-phase molecules react at high temperatures during chemical vapor deposition to form molybdenum disulfide, a two-dimensional semiconductor that could find use in next-generation electronics. In this illustration, molybdenum atoms are purple, oxygen is red and sulfur is yellow.

“Hundreds of labs are cooking these TMDs, quite oblivious to the intricate transformations occurring in the dark oven,” said Yakobson, the Karl F. Hasselmann Professor of Materials Science and NanoEngineering and a professor of chemistry. “Here, we’re using quantum-chemical simulations and analysis to reveal what’s there, in the dark, that leads to synthesis.”

The short answer is that it takes three steps. First, the solids are sublimated through heating to change them from solid to gas, including what Yakobson called a “beautiful” ring-molecule, trimolybdenum nonaoxide (Mo3O9). Second, the molybdenum-containing gases react with sulfur atoms under high heat, up to 4,040 degrees Fahrenheit. Third, molybdenum and sulfur molecules fall to the surface, where they crystallize into the jacks-like lattice that is characteristic of TMDs.

What happens in the middle step was of the most interest to the researchers. The lab’s simulations showed a trio of main gas phase reactants are the prime suspects in making MoS2: sulfur, the ring-like Mo3O9 molecules that form in sulfur’s presence and the subsequent hybrid of MoS6 that forms the crystal, releasing excess sulfur atoms in the process.

Lei said the molecular dynamics simulations showed the activation barriers that must be overcome to move the process along, usually in picoseconds.

“In our molecular dynamics simulation, we find that this ring is opened by its interaction with sulfur, which attacks oxygen connected to the molybdenum atoms,” he said. “The ring becomes a chain, and further interactions with the sulfur molecules separate this chain into molybdenum sulfide monomers. The most important part is the chain breaking, which overcomes the highest energy barrier.”

That realization could help labs streamline the process, Lei said. “If we can find precursor molecules with only one molybdenum atom, we would not need to overcome the high barrier of breaking the chain,” he said.

Yakobson said the study could apply to other TMDs.

“The findings raise oftentimes empirical nanoengineering to become a basic science-guided endeavor, where processes can be predicted and optimized,” he said, noting that while the chemistry has been generally known since the discovery of TMD fullerenes in the early ’90s, understanding the specifics will further the development of 2D synthesis.

“Only now can we ‘sequence’ the step-by-step chemistry involved,” Yakobson said. “That will allow us to improve the quality of 2D material, and also see which gas side-products might be useful and captured on the way, opening opportunities for chemical engineering.”