Discovery of Microscopic Metallic Particles in The Human Brain

A UK-led international team of researchers has discovered elemental metallic copper and iron in the human brain for the first time.

In the paper, ‘Biogenic metallic elements in the human brain?’, published in the journal Science Advances, funded by the UKRI Engineering and Physical Sciences Research Council, researchers looked at amyloid plaques isolated from the brain tissue of deceased Alzheimer's patients. 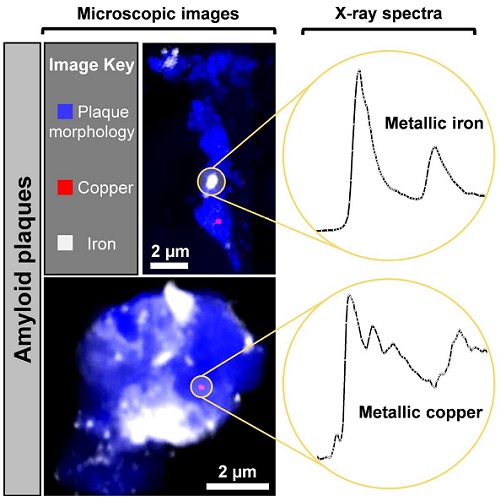 Amyloid plaques, a hallmark feature of Alzheimer's disease, act as a site of disrupted metal chemistry in the Alzheimer’s brain, and are believed by many to be integral to disease progression.

Synchrotrons are a form of particle accelerator which harness the power of electrons to produce brilliantly bright x-rays which can be used to study anything from fossils to vaccines with exceptional chemical and spatial sensitivity.

The surfaces of metallic copper and iron are usually highly unstable and readily react with oxygen from their surroundings to form oxides and other compounds. Chemical compounds of copper and iron are among many metals that occur naturally in the body and are vital for brain well-being.

However, when faults develop in the body’s biochemistry, these metals can also cause damage to the brain. Metal imbalances may be linked to the development of numerous dementia-causing neurodegenerative diseases including Alzheimer’s and Parkinson’s, which afflict millions of individuals worldwide.

The identification of previously undocumented metallic copper and iron deposits within human brain tissue, indicates that metallic elements, previously observed only in microorganisms, viruses and plants, can also occur in humans. 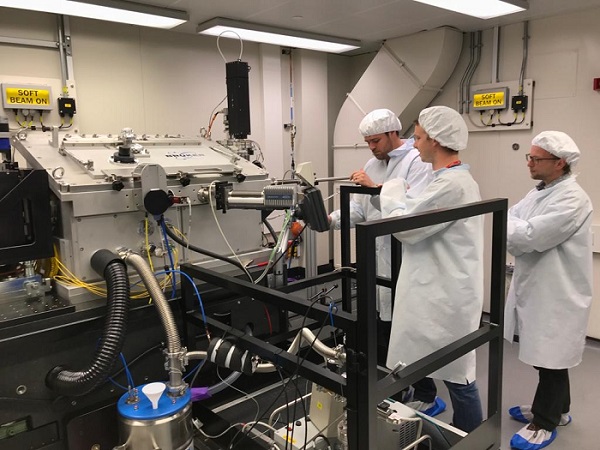 These metallic forms of iron and copper have distinctly different chemical and magnetic properties from their oxide forms, in which they are predominately stored in tissues. The role of the expected highly reactive surfaces of nano-deposits of copper and iron in natural or pathological processes remains to be seen. Their discovery therefore potentially offers new insights into the roles played by metals in normal neurochemistry and neurobiology, as well as in neurodegenerative diseases.

Professor Joanna Collingwood, co-author and lead for the Trace Metals in Medicine Laboratory at the University of Warwick said:

“This is a fascinating and unexpected discovery, enabled by the sensitivity and precision of the synchrotron techniques we have used to study these human-brain-derived samples. We know that certain living systems can produce elemental forms of metals, so it will be important to discover if these arise from equivalent but previously undiscovered pathways in humans, or if the metallic forms arise as a direct consequence of disease.”

Professor Peter Sadler, a medicinal chemist co-author at Warwick who specialises in research on metals in medicine, commented that:

“About 10 natural metals have roles in the brain. Studying their nano-speciation (their atomic chemical forms) in intact tissues is a major challenge. Our results show that synchrotron X-ray spectromicroscopy can reveal a totally new picture of metal neurochemistry that eventually might lead to new understanding of how the brain works and to new treatments for neurological conditions.”

Dr James Everett, a lead author from Keele University and an Honorary Fellow at Warwick, said: “Should the magnetic metals identified through this research be linked to the development of Alzheimer’s, they have a potential use as markers for disease diagnosis using techniques such as magnetic resonance imaging (MRI), allowing for pre-clinical disease screening of at-risk cohorts.”

This discovery offers a potential step-change in our understanding of how metal elements that are essential to human health can also play a role in neurodegenerative disorders. This may to inform future use of therapies designed to restore metal balance in disorders where damage to brain cells arises as a consequence of disrupted regulation.

Outstanding questions remain regarding the origins of the metallic brain metals, including whether they are uniquely associated with amyloid plaques or are more widely distributed throughout the brain. The team believe the presented findings will stimulate new and exciting research into the role of metal biochemistry in the human brain, whilst the state-of-the-art techniques used could be adapted to examine a variety of biological systems and problems.