In high-temperature superconductors, this comes in the form of the electronic structure exhibiting a pronounced difference in the lattice-bound directions along which atoms are ordered.

Within these materials, this electronic activity in turn breaks the rotational symmetry of the crystal, a phase known as electronic nematicity. Researchers have sought to better understand this novel electronic state, which co-exists with superconductivity.

Boston College Associate Professor of Physics Ilija Zeljkovic and an international team of researchers set out to better understand the atomic-scale signature of electronic nematic transition in Fe(Te,Se) -- a class of materials known as iron chalcogenide superconductors -- in a particularly formulated composition of the material where electronic nematicity may spatially change most rapidly or fluctuate over time. 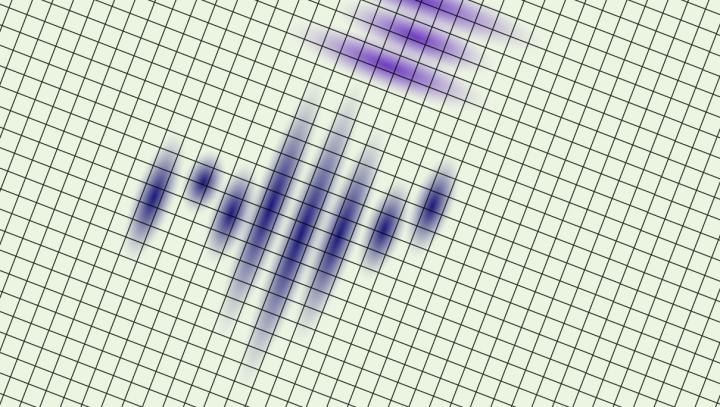 Examining an iron chalcogenide high-temperature superconductor, Boston College physicist Ilija Zeljkovic and an international team of researchers report in Nature Physics that just before the material fully enters the nematic state, electronic nematicity first appears in nanoscale patches on its surface, represented in this image by the dark markings.

A focus of researchers trying to understand superconducting properties, iron chalcogenides are defined by their composition from varying percentages of sulfur, selenium, and tellerium. For their experiments, the team created compound samples containing between 35 to 50 percent selenium, ultimately finding that a 45-percent selenium construct revealed electronic nematicity that is spatially inhomogeneous, or failing to occur equally at each point in the material.

In addition, the team discovered that in the same 45-percent selenium composition tiny amounts of "strain" -- a stretching of the material along one direction -- of just a fraction of a percent can lead to the appearance of local nematicity, which in turn suppresses superconductivity. This was not the case for Fe(Te,Se) samples constructed at a lower Se composition of 35 percent, which show negligible effects on superconductivity from the same amounts of strain.

The team found that in certain compositions of Fe(Te,Se) the nematic fluctuations can be "pinned" by structural disorder, which hinders superconductivity in particular regions of the material, said Zeljkovic, joined on the project by his Boston College colleagues Professor of Physics Ziqiang Wang and graduate students He Zhao and Hong Li, as well as researchers from other institutions in the U.S. and China.

"It was surprising that nematic regions appear to be not superconducting at all, despite the fact that the superconducting transition temperature should be the highest at the 45-percent composition," said Zeljkovic. "This could be indicative of nematic 'fluctuations', thought to enhance superconductivity near the nematic transition, becoming static and thus reducing superconducting properties locally."

Zeljkovic said the results indicate that a hidden quantum critical point -- a sought-after benchmark at the transition between different states in matter at zero degrees Kelvin -- may exist in Fe(Te,Se). He said further research into the material would be required to determine if that is the case.