Most microplastic particles in the environment originate from larger pieces of plastic. In a long-term study, an interdisciplinary research team at the University of Bayreuth has simulated how quickly plastic breaks down into fragments under natural influences. High-tech laboratory tests on polystyrene show two phases of abiotic degradation. To begin with, the stability of the plastic is weakened by photo-oxidation. Then cracks form and more and more and smaller fragments are released into the environment. The study, published in the journal "Environmental Science & Technology", allows conclusions to be drawn about other plastics that are common in the environment.

Polystyrene is an inexpensive plastic that is often used for packaging and thermal insulation, and is therefore particularly common in plastic waste. As part of their long-term study, the Bayreuth researchers for the first time combined analytical investigations, which were also carried out on polystyrene particles at the atomic level, with measurements determining the behaviour of these particles under mechanical stress. On the basis of this, they developed a model for abiotic degradation, i.e. degradation without the influence of living organisms.

"Our study shows that a single microplastic particle with a diameter of 160 micrometres releases about 500 particles in the order of 20 micrometres - i.e. 0.02 millimetres - over the course of one and a half years of being exposed to natural weathering processes in the environment. Over time, these particles in turn break down into smaller and smaller fragments. An ecocorona can form around these tiny particles, possibly facilitating penetration into the cells of living organisms. This was discovered a few months ago by another Bayreuth research group," says first author Nora Meides, a doctoral student in macromolecular chemistry at the University of Bayreuth. 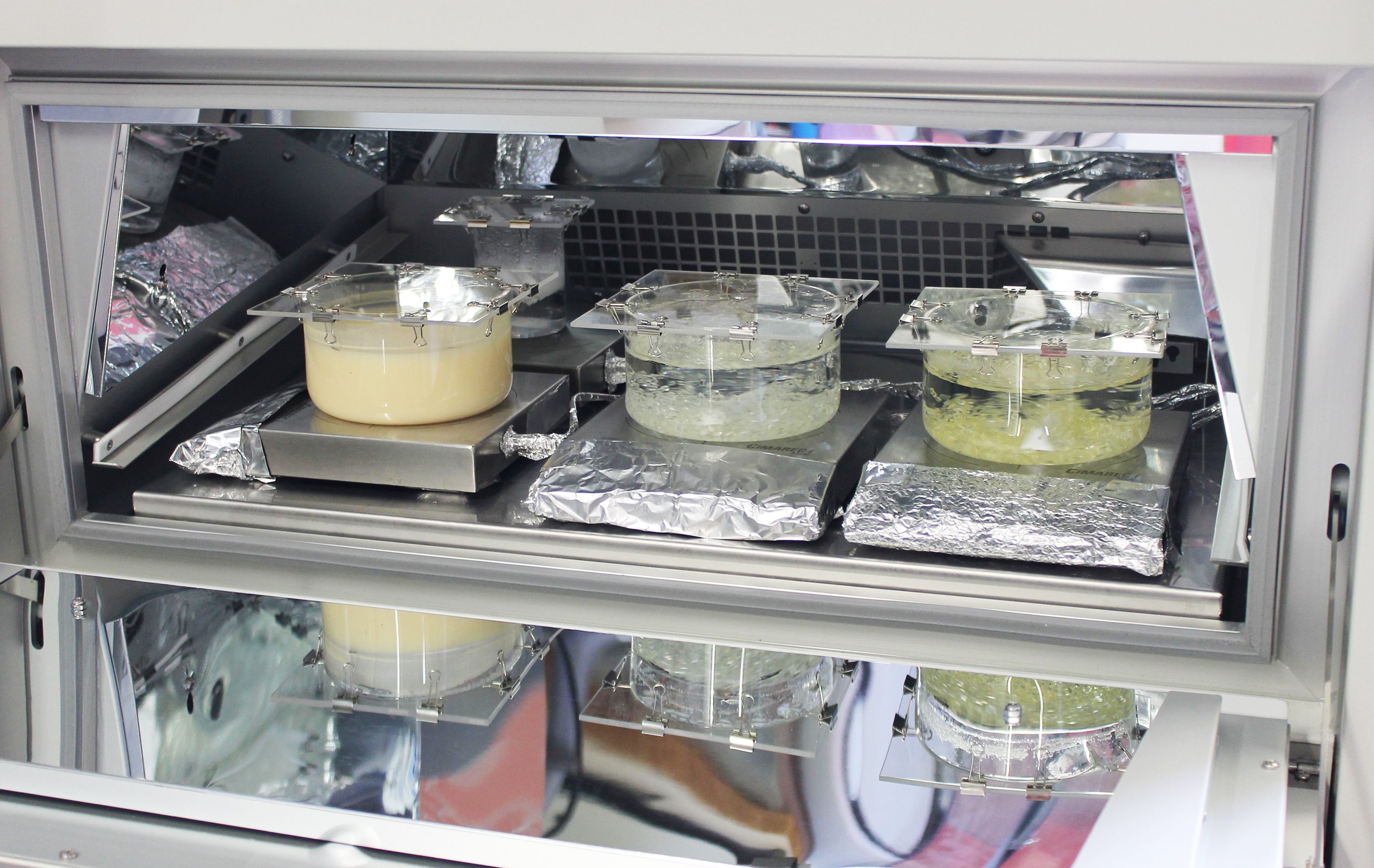 Samples of plastic particles in the weathering facility.

In the water, the microplastic particles were exposed to two stress factors: intense sunlight and continuous mechanical stress produced by agitation. In the real-world environment, sunlight and mechanical stress are in fact the two main abiotic factors that contribute to the gradual fragmentation of the particles. Irradiation by sunlight triggers oxidation processes on the surface of the particles. This photo-oxidation, in combination with mechanical stress, has significant consequences. The polystyrene chains become ever shorter. Furthermore, they become increasingly polar, i.e. centres of charge are formed in the molecules. In the second phase, the microplastic particles begin to fragment. Here, the particles break down into smaller and smaller micro- and nanoplastic fragments.

"Our research results are a valuable basis for investigating the abiotic degradation of macro- and microplastics in the environment - both on land and at the surface of water - in more detail, using other types of plastic as examples. We were surprised by the speed of fragmentation ourselves, which again shows the potential risks that could emanate from the growing burden of plastics on the environment. Especially larger plastic waste objects, are – when exposed to sunlight and abrasion – a reservoir of constant microplastic input. It is precisely these tiny particles, barely visible to the naked eye, that spread to the remotest ecosystems via various transport routes," says Teresa Menzel, PhD student in the area of Polymer Engineering. 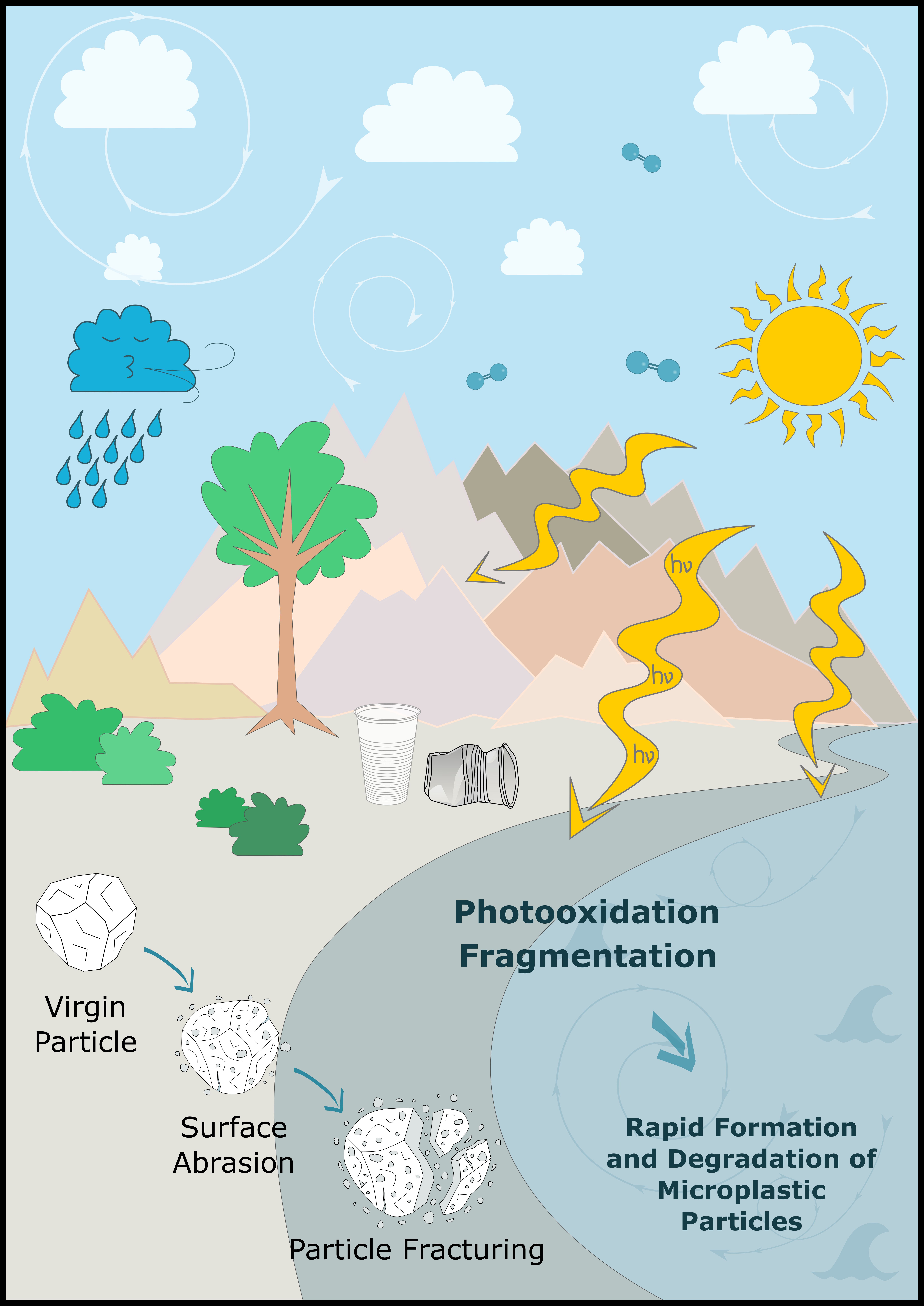 "The polystyrene investigated in our long-term study has a carbon-chain backbone, just like polyethylene and polypropylene. It is very likely that the two-phase model we have developed on polystyrene can be transferred to these plastics," adds lead author Prof. Dr. Jürgen Senker, Professor of Inorganic Chemistry, who coordinated the research work.

The study that has now been published in the journal Environmental Science & Technology, is the result of the close interdisciplinary cooperation of a working group belonging to the DFG Collaborative Research Centre "Microplastics" at the University of Bayreuth. In this team, scientists from macromolecular chemistry, inorganic chemistry, engineering science, and animal ecology are jointly researching the formation and degradation of microplastics. Numerous types of research technology are available on the Bayreuth campus for this purpose, which were used in the long-term study: among others, ¹³C-MAS-NMR spectroscopy, energy dispersive X-ray spectroscopy (EDX), scanning electron microscopy (SEM), and gel permeation chromatography (GPC).