NUS researchers have developed a new generation of near infra-red (NIR)-emitting nanoprobes for super-resolution imaging in deep tissues. These nanoprobes are based on lanthanide-doped nanomaterials with rich energy levels, high photostability and programmable optical kinetics.

Stimulated-emission depletion (STED) microscopy, invented by Stefan HELL in 2000 (awarded the Nobel Prize in Chemistry 2014), has brought optical microscopy into the nanodimension and profoundly extended our horizons to the subcellular level. For a typical STED microscope, two laser beams are utilised; one of the laser beams stimulates fluorescent molecules to glow and the other cancels out all the fluorescence except for that which is present in a nanometre-sized volume.

By scanning over the sample in a stepwise manner, nanometre by nanometre, an image with a resolution better than Abbe’s stipulated limit (physical limit for the maximum resolution of traditional optical microscopy) can be obtained. Organic fluorophores are commonly used for STED microscopy. However, the intense pulses in STED microscopy often compete with fast spontaneous fluorescence (k > 108 s-1) from the fluorophores, resulting in potential phototoxicity, photobleaching, and significant depletion-induced re-excitation background. This reduces the quality of the obtained images. Moreover, organic fluorophores often work in the visible-light region and this hinders potential applications involving deep tissues.

A research team led by Prof LIU Xiaogang from the Department of Chemistry, National University of Singapore, discovered that a series of neodymium (Nd3+)-doped lanthanide nanoparticles can act as more effective nanoprobes for STED imaging applications, enabling autofluorescence-free, low-power, super-resolution imaging in NIR optical windows. Upon excitation by a 808 nm wavelength laser beam, these Nd3+-doped nanoparticles emit strong luminescence around the 860 nm NIR region with more than 20% efficiency. When co-illuminated with a 1064 nm wavelength laser, this NIR luminescence is immediately switched off.

The research team found that a near-unity efficiency (98.8%) in luminescence suppression can be achieved by increasing the depletion power. In comparison to organic dye-mediated STED microscopy, the amount of power required to reduce the luminescence intensity by half, known as the saturation intensity, is more than two orders of magnitude lower. This ability of the Nd3+-doped nanoparticles to be turned on and off by using different laser beam wavelengths at low power conditions enabled the STED process to achieve a lateral resolution of about 19 nm for a single nanoparticle.

Apart from the visual quality, the team has also investigated the mechanism underlying the performance of the Nd3+-doped nanoparticles in STED imaging applications. With a quasi-four-level configuration and long-lived (>100 milliseconds) metastable states, these Nd3+-doped nanoparticles can be easily excited to the metastable-emitting level and the energy level above the ground state. As the nanoparticles can remain at the excited states for a longer period of time, less laser energy is required for the imaging process. The four-level configuration can also eliminate depletion-beam-induced re-excitation, leading to an efficient stimulated-emission depletion process. 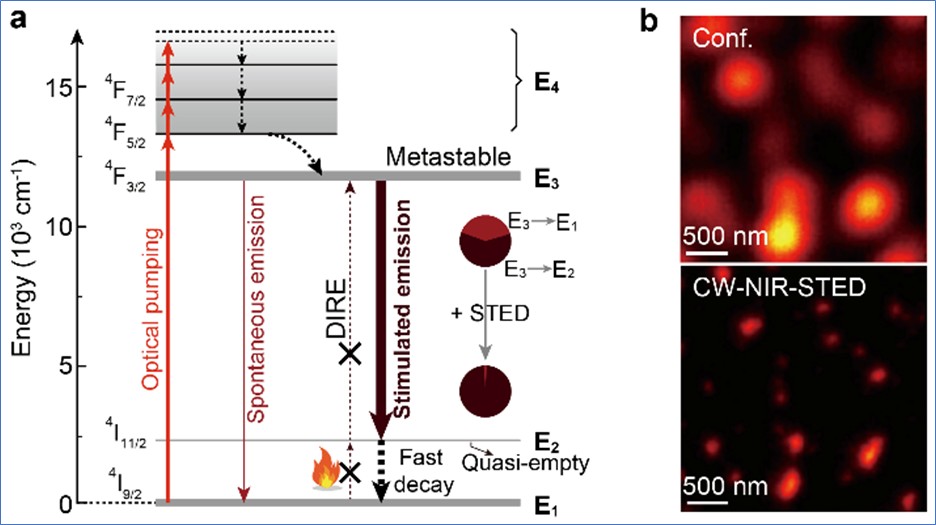 Figure (a) shows the proposed optical emission depletion mechanism of the near infra-red (NIR) downshifting luminescence in the neodymium-mediated stimulated-emission depletion (STED) process. Figure (b) compares the images obtained from conventional confocal imaging and STED imaging using the lanthanide nanoparticles, with better contrast in the latter technique.