Researchers report that small quantities of useful molecules such as hydrocarbons are produced when carbon dioxide and water react in the presence of light and a silver nanoparticle catalyst. Their validation study – made possible through the use of a high-resolution analytical technique – could pave the way for CO2-reduction technologies that allow industrial-scale production of renewable carbon-based fuels.

The study, led by University of Illinois Urbana-Champaign chemistry professor Prashant Jain, probes chemical activity at the surface of silver nanoparticle catalysts under visible light and uses carbon isotopes to track the origin and production of these previously undetected chemical reactions. The findings are published in the journal Nature Communications.

Sunlight-driven conversion of CO2 and water into energy-dense multicarbon compounds is a viable technology for renewable energy generation and chemical manufacturing. Because of this, researchers have been on the hunt for synthetic catalysts that facilitate large-scale CO2 reduction into multicarbon molecules, the study reports. 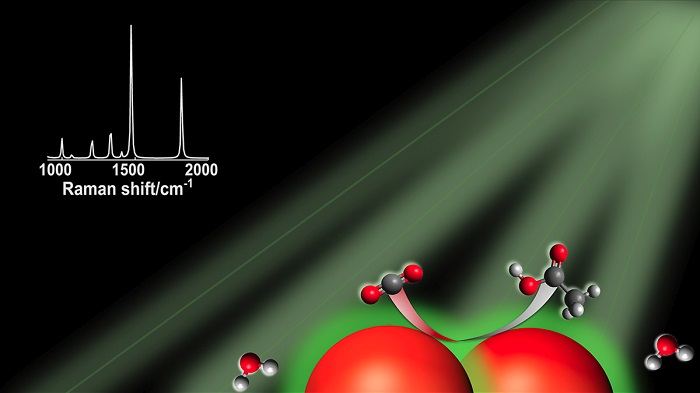 In the right conditions, silver nanoparticles, represented by the large orange spheres, can absorb visible light. Charge carriers produced by light excitation are transferred to CO2 and water, allowing the conversion to hydrocarbons and other multicarbon molecules. In the graphic, carbon atoms are black, oxygen atoms are red and hydrogen atoms are white.

“Industrial-level catalytic chemical reactions are usually tested and optimized on the basis of the bulk profile of the final products,” Jain said. “But there are chemical species formed at the intermediate stages of such reactions, on the surface of the catalysts, that might be too scarce to detect and measure using conventional methods but are fundamental signifiers of how a catalyst functions.”

In the lab, Jain’s team used a specially outfitted Raman spectroscope to detect and identify single molecules formed at the surface of individual silver nanoparticles. By isolating a single nanoparticle on which the chemical reactions progress, the researchers can use a highly focused laser to excite molecules forming on the catalyst surface to create a spectral signal that identifies the molecules formed in discrete, elementary steps of the overall chemical process.

“I like to think of this work in terms of a story,” Jain said. “There is an overall theme to a story, which is the reduction of CO2. The main characters are CO2, H2O, silver nanoparticles, carbon monoxide and hydrogen ions, for example. But there are also some more minor but very interesting characters like butanol, acetate and oxalic acid that help tell the back story of the main characters. And sometimes, the minor characters are a lot more interesting than the major ones.”

Sometimes minor characters can come with some unintended players, Jain said. To ensure that the intermediate carbon-based molecules the researchers detected are a result of the CO2 reduction process and not contamination, they used CO2 containing only carbon-13 isotope, which makes up only 1.1% of the carbon on Earth.

“Using carbon-13 to trace the reaction pathways allowed us to confirm that any hydrocarbons measured were there as a result of the CO2 we intentionally added in the reaction vessel, and not accidentally introduced via contamination of the silver nanoparticles or later during the analysis process,” Jain said. “Carbon-13 is rare, so if we were to detect it in our reaction products, we would know it was the result of the light-driven conversion of CO2 and C–C bond formation.”

The scale of multicarbon molecule formation by using silver nanoparticle catalysts remains very small at this stage of the research, Jain said. However, researchers can concentrate on developing improved synthetic catalysts and scaling up for industrial production, now that the promise of light-harvesting nanoparticles has been revealed.

The National Science Foundation and the Energy and Biosciences Institute through the EBI–Shell program supported this study.

U. of I. graduate researcher Dinumol Devasia conducted the studies with contributions from former postdoctoral researcher Andrew J. Wilson, former graduate students Varun Mohan and Jaeyoung Heo. Jain also is affiliated with physics, the Materials Research Laboratory and the Beckman Institute for Advanced Science and Technology at Illinois.