How to Shut Down the Power Stations of Cancer Cells

An emerging nanomedicine cancer treatment involving the injection of tiny nanoparticles carrying compounds that can poison cancerous cells has many benefits. This so-called photodynamic therapy (PDT) is non-toxic and it doesn’t involve invasive surgery. A team led by Jan van Hest from Eindhoven University of Technology in collaboration with researchers from China and the UK have designed a new PDT nanoparticle that attack cancerous cells in a novel way: they enter cells and shut down their power stations – their mitochondria – making the therapy much more effective. This new research has been published in Angewandte Chemie.

Imagine a city powered by a group of power stations. If all stations simultaneously shut down for reason, there will be a city-wide blackout. The city will come to a standstill, chaos might ensue, but most importantly, the city won’t function as a city should.

Each cell in our body can be seen as a small city. Instead of buildings, a cell contains organelles like the nucleus and ribosomes. The ‘power stations’ of cells are the mitochondria, which generate the fuel in the form of adenosine triphosphate (ATP). If the mitochondria suddenly shut down, then the cell faces certain death – whether it’s a healthy cell or a cancerous cell.

That’s exactly what Jan van Hest, who is leading the Institute for Complex Molecular Systems (ICMS) at TU/e, and his research team in collaboration with researchers from China and UK aimed for in a new approach for an emerging cancer treatment, called photodynamic therapy (PDT). 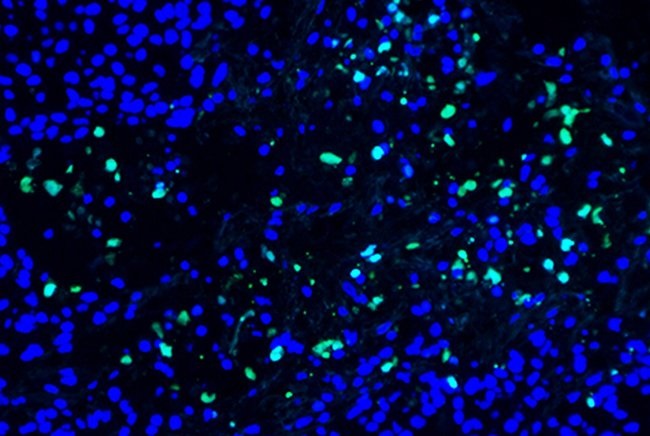 PDT is a non-toxic and non-invasive alternative to current treatments to eliminate cancer cells such as chemotherapy, radiation treatment, and elective surgery. For the patient, these treatments can have numerous side-effects that affect their quality of life, but fortunately, less abrasive options are in development.

In PDT, the patient is injected with tiny nanoparticles carrying photosensitizers (a material that reacts to light). When the nanoparticles gather near cancerous cells, they are illuminated with laser light and produce a specific form of oxygen, which is toxic for cancer cells and eventually leads to their death.

At TU/e, Jan van Hest and his research group have been making steady progress on improving the PDT approach, as demonstrated by a study published in ACS Nano last year.

However, by designing PDT nanoparticles to enter the cancerous cells and disrupt their power-supplying mitochondria, the cells can be rapidly ‘powered down’ and the effectiveness of the PDT treatment would be drastically increased. In other words, the nanoparticles could kill the cancer cells in a more targeted and faster way. 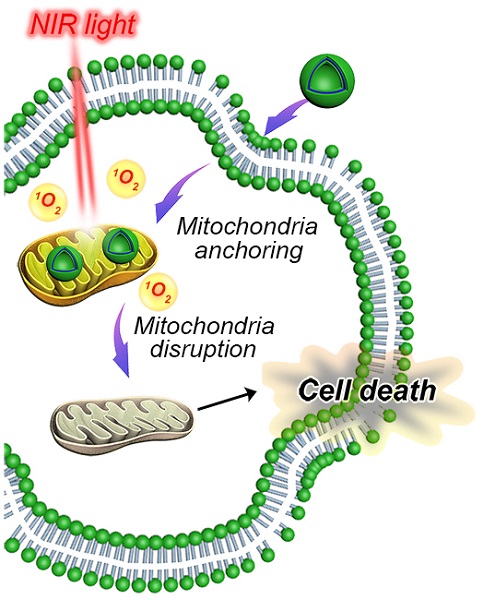 The importance of fluorescence

The team developed a way to fabricate the nanoparticles as biodegradable polymersomes, empty spheres that can carry drugs, proteins, or a photosensitizer.

However, unlike previous nanoparticles, the new versions are designed to fluoresce when the building blocks they are composed of are assembled.

This fluorescent process is known as aggregation-induced emission and the emission response makes it easier to track the location of the nanoparticles in tissue.

Nonetheless, van Hest is quick to point out that while PDT is a revolutionary new non-invasive treatment, there is still the need for other treatments. “This work is a next step in the development of effective PDT nanoparticles. As a treatment it would work best in combination with existing therapies. Importantly, it would decrease the reliance on radiation treatments and chemotherapy, which can only be good for patients.”

“We are still in need of more selective and effective therapies to treat cancer. PDT has the potential to be selective and accurate in terms of targeting and eliminating cancerous cells,” adds van Hest. “This research shows that we can effectively design the materials needed to build self-assembled nanoparticles with high efficacy when it comes to killing cancerous cells.”

Of course, these findings motivate further research and development on the nanoparticles, their tracking, and efficacy.

But when it comes to the mitochondria or power stations of cancer cells, their future is not looking very bright. Their lights just might be about to go out.

A Noninvasive Test to Detect Cancer Cells and Pinpoint Their Location