The antibodies are capable of neutralizing a wide range of SARS-CoV-2 variants even at sub-nanomolar concentrations. In addition, the combinations of these antibodies reduce the risk of generating escape mutants in vitro. The study is published in the journal Science.

Severe acute respiratory syndrome coronavirus 2 (SARS-CoV-2), the causative pathogen of coronavirus disease 2019 (COVID-19), is an enveloped, positive-sense, single-stranded RNA virus belonging to the human beta-coronavirus family. The spike glycoprotein on the viral envelop is composed of two subunits S1 and S2. Of which, the S1 subunit directly binds to the host cell angiotensin-converting enzyme 2 (ACE2) receptor through the receptor-binding domain (RBD) to initiate the viral entry process.

The majority of therapeutic antibodies against SARS-CoV-2 have been designed based on the native spike protein sequence found in the original Wuhan strain of SARS-CoV-2. Thus, novel viral variants with multiple spike protein mutations may likely develop resistance against these antibodies. In this context, studies have shown that antibodies developed in response to currently available COVID-19 vaccines have less efficiency in neutralizing novel variants of concern (VOCs) of SARS-CoV, including B.1.1.7, B.1.351, P1, and B.1.617.2.

In the current study, the scientists have isolated and characterized anti-spike RBD antibodies from COVID-19 recovered patients. 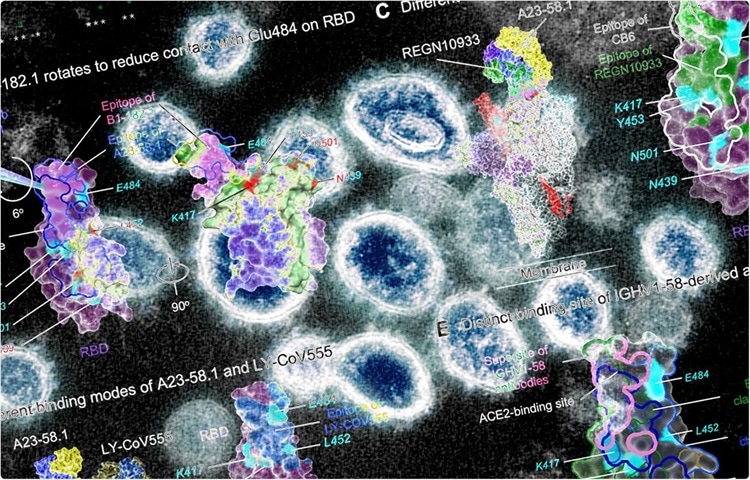 The B cells isolated from donor-derived blood samples were sorted for antibody identification. This led to the identification of four potent neutralizing antibodies targeting the spike RBD. These antibodies showed a high affinity for the SARS-CoV-2 spike even at nanomolar concentrations.

To determine whether the high potency antibodies could block ACE2 – spike binding, interferometry ACE2-competition and cell surface binding assays were performed. The findings revealed that of 4 antibodies, two bound to RBDs in the “up position” and two bound to RBDs in the “down position.” Moreover, three out of four antibodies directly blocked the RBD – ACE2 interaction, and one indirectly inhibited the interaction through steric hindrance - the slowing of chemical reactions due to steric bulk.

Structural and functional analysis of antibodies

Cryo-electron microscopic analyses of antibody-antigen complex structures revealed that two antibodies with the highest neutralization potency bind to the spike protein with all RBDs in “up position.” Further structural analyses revealed that the epitope binding modes of the antibodies are responsible for high neutralizing potency against SARS-CoV-2 VOCs. The binding and neutralizing ability of the antibodies was negatively impacted by three spike mutations, including F486R, N487R, and Y489R.

In two of the most potent antibodies, one was negatively impacted by a single F486S mutation, and the other one was impacted by the F486L, N487D, and Q493R mutations. However, the Q493R mutation showed a negligible impact on binding and neutralization. Further analysis revealed that these escape mutations are primarily absent in circulating viral variants, indicating the absence of selection pressure.

By conducting multiple rounds of selection using combination treatments with two antibodies, it was observed that antibody combinations might reduce the risk of escape mutation acquisition and subsequent development of resistant viral variants.