Cells play a precise game of telephone, sending messages to each other that trigger actions further on. With clear signaling, the cells achieve their goals. In disease, however, the signals break up and result in confused messaging and unintended consequences. To help parse out these signals and how they function in health -- and go awry in disease -- scientists tag proteins with labels they can follow as the proteins interact with the molecular world around them.

The challenge is figuring out which proteins to label in the first place. Now, a team led by researchers from Tokyo University of Agriculture and Technology (TUAT) has developed a new approach to identifying and tagging the specific proteins. They published their results on June 1 in Angewandte Chemie, a journal of the German Chemical Society.

"We are interested in exploring protein receptors of certain carbohydrate molecules that are involved in mediating cell signaling, particularly in cancer cells," said paper author Kaori Sakurai, associate professor in the Department of Biotechnology and Life Science at TUAT.

The carbohydrate molecules, called ligands, are typically expressed on the surface of cells and are known to dynamically form complexes with protein receptors to coordinate complicated cellular functions. However, Sakurai said, the proteins responsible for binding the carbohydrates have been difficult to identify because they bond so weakly with the molecules.

The researchers designed a new type of carbohydrate probe that would not only link to the molecules, but tightly bind to them. 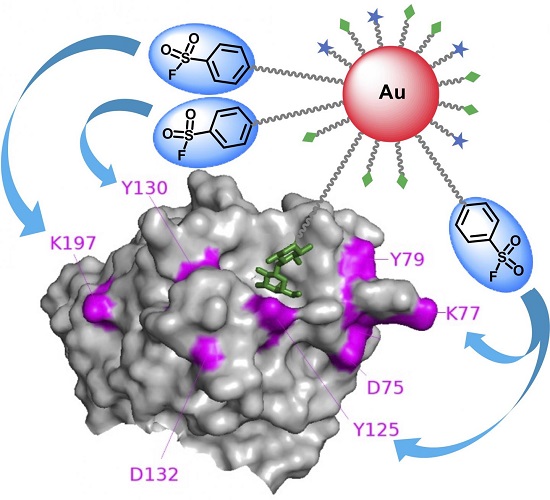 "We used gold nanoparticles as a scaffold to attach both carbohydrate ligands and electrophiles -- a chemical that loves to react with other molecules -- in a multivalent fashion," Sakurai said. "This way, we were able to greatly increase binding affinity and reaction efficiency toward carbohydrate-binding proteins."

The researchers applied the designed probes to cell lysate, a fluid containing the innards of broken-apart cells.

"The probes quickly found the target carbohydrate-binding proteins, triggering the electrophilic groups to react with electron-donating amino acid residues on nearby proteins," Sakurai said. "This resulted in proteins firmly cross-linked to the gold nanoparticles' surface, making it easy to subsequently analyze their identities."

The team evaluated several electrophilic groups to identify the most efficient type for labeling their target proteins.

"We found that a particular electrophilic group called aryl sulfonyl fluoride is best suited for affinity labeling of carbohydrate-binding proteins," said co-author Nanako Suto, a graduate student in the Department of Biotechnology and Life Science of TUAT. "However, they have rarely been used to identify target proteins, presumably because they would non-selectively react with various other, undesired proteins."

However, the scale of aryl sulfonyl fluoride use appears to mitigate the issue.

"The non-selectivity isn't a problem if aryl sulfonyl fluoride is used at very low concentrations, at the range of the nanoscale," said co-author Shione Kamoshita, also a graduate student in the Department of Biotechnology and Life Science, TUAT.

The gold nanoparticle scaffolding displays many copies of the electrophilic group, which keeps aryl sulfonyl fluoride's local concentration high on the nanoparticle surface but restrains them from the general cell system and reacting to undesired proteins. With the high concentration at the nano-level, some copies of electrophilic groups can efficiently react with target proteins.

"Through this process, we were able to achieve highly efficient and selective affinity labeling of carbohydrate-binding proteins in cell lysate," Sakurai said. "We will apply the new method in target identification of several cancer-related carbohydrate ligands and investigate their function in cancer development. In parallel, we aim to explore the general utility of this new probe design for various other bioactive small molecules, so that we can accelerate the elucidation of their mechanisms."