Following the previous successful integration of NEO's silicon (Si) nanocoating technology in Si nanoparticles ranging from 50 nm to 100 nm, Dr. J. H. Park, Director and Chief Scientific Advisor of NEO, is pleased to announce that the additional capability to exhibit substantial performance effectiveness with metallurgical grade, micron-sized (μm) Si particles is a step-change for NEO due to the significant cost reductions from the Si microparticle range and the flexibility of applying NEO's technology onto various Si particle sizes. On average, Si microparticles are 8 to 10 times cheaper compared to Si nanoparticles.

Despite retaining more than a 10 times higher specific capacity than graphite, Si material easily loses its energy retention and storage capacity due to high volume expansion and particle pulverization after minimal charging cycles. Nanosized Si could minimize its gradation pathway and partially solve this shorter life cycle problem, but the expensive cost of Si nanoparticles serves as a major bottleneck and issue for battery manufacturers and electric vehicle (EV) companies.

Due to more efficient process times and lean, inexpensive manufacturing environments, metallurgical-grade Si microparticles are highly cost-effective compared to Si nanoparticles, but performance issues at the microparticle level have hindered the widespread adoption.

"NEO is hence targeting on a two-track to develop and refine its technology on both Si microparticles and nanoparticles. The results shown in this test emphasize the potency of NEO's Si nanocoating technology that can be applied to silicon with various particle sizes. Our technology's flexibility of application, performance, and price competitiveness serve as the most crucial value propositions," commented Spencer Huh, President and CEO of NEO. 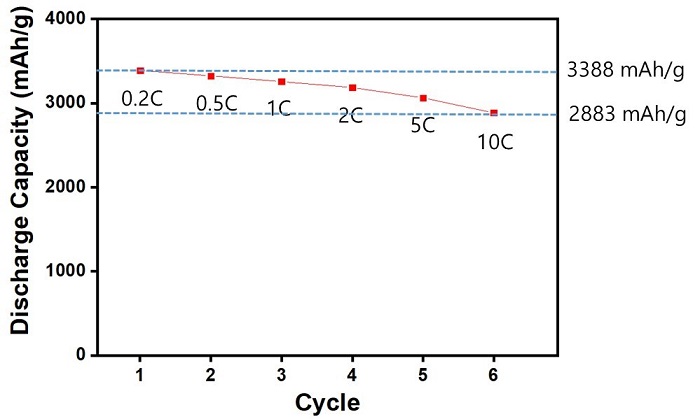 Regarding the test results, Dr. Park also commented, "Our unique solution one-pot process integrates micron-sized silicon particles uniformly coated by a nanometer-thick magic coating layer, which substantially outperforms the rate-capability as shown below. From the data of 10 C-rate, which represents a 6-minute charge/discharge of the cells, we can confirm several minute-level ultra-fast charging/discharging without major capacity loss from our technology."

Mr. Huh added, "NEO's Si anode will be a simple yet unique solution for the production of low-cost Si anode with high-capacity battery electrodes. The Company will be moving forward to test its micron-sized silicon anodes through third-party laboratory tests and direct transfers to companies in the battery supply chain that have signed NDAs with us."