Some materials used in aerospace applications such as polymers can degrade and erode with prolonged exposure to atomic oxygen, ultraviolet radiation, and extreme temperature cycling in the outer space. Also, because orbiting spacecraft such as the International Space Station travel at approximately 18,000 miles per hour, micrometeoroids and other space debris pose serious threats to the integrity of lightweight space structures comprised of polymers and their composites.

Introducing self-healing materials that incorporate specially designed nanoparticles and microparticles could provide a more durable solution for space structures. Several labs at the University of Illinois Urbana-Champaign worked together to meet this challenge, and for the first time, sent self-healing materials into orbit for testing at the ISS National Laboratory. 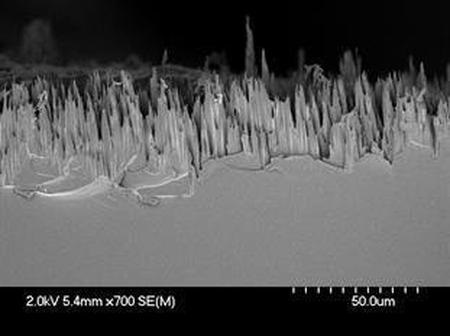 “The materials we use are novel nanocomposites, based on thermosetting polydicyclopentadiene (pDCPD)-matrix mixed with self-healing components, which can be cured in a matter of minutes to hours compared to traditional thermosetting polymers that take days to cure inside an autoclave. Also, these novel pDCPD-based materials are amenable to additive manufacturing techniques with the potential for rapid fabrication or repair of parts right where they are in space,” said Debashish Das, a postdoctoral scholar in the Department of Aerospace Engineering at UIUC.

Samples prior to exposure to vacuum and the thermal conditions encountered on orbit.

Professors Nancy Sottos and Ioannis Chasiotis are funded by the Air Force Office for Scientific Research and the ISS National Lab to develop samples that would be mounted facing three different directions on the ISS, because each side of the ISS is exposed to conditions with different amounts of ultraviolet radiation and atomic oxygen: ram, in the direction of travel; wake in the trailing direction; and zenith, facing away from the Earth.

Because of the high cost of conducting experiments in space, each sample had to be about the size of the eraser on top of a pencil. In all, 27 samples were fixed to three plates, each being one inch square. A window over each sample allows exposure to the space environment. 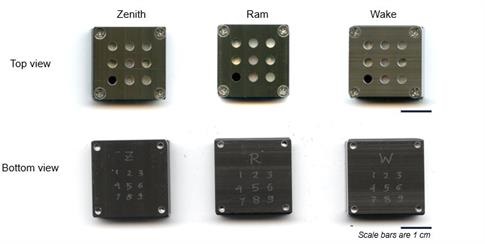 Front and back of each of the tree, one-inch square plates.

Aerospace graduate student Eric Alpine and AE faculty Michael Lembeck used their facilities in the Talbot Laboratory to determine the volatile content in the samples to be exposed to space. The samples were baked under high vacuum at 176 degrees Fahrenheit for 24 hours to simulate accelerated space conditions. The mass loss of all the samples remained within the acceptable limit allowed by NASA.

Materials Science and Engineering Ph.D. student Kelly Chang and postdoctoral scholar Mayank Garg, in the Autonomous Materials Systems Group at the Beckman Institute, developed the self-healing strategies and fabricated all of the samples.

“Based on a prior experiment at the ISS by Professor Chasiotis’ group, we know that embedding glass nanoparticles in all of the samples will improve the erosion resistance,” Chang said. “In Professor Nancy Sottos’ group, we have been experimenting with a more active mechanism for resisting erosion damage. We embedded microcapsules, holding active materials that are triggered when the atomic oxygen in space ruptures the capsules and allows the liquid core of these capsules to react.”

Chang said there are also samples that do not contain the capsules and these samples will act as controls for later experiments. The samples also contain standard aerospace-grade epoxy for comparison.

Das said that if these self-healing polymers prove successful in space, it could be a huge plus for manufacturing in outer space. “That's a long-term goal,” he said, “to be manufactured in space.”

Garg added, “If our hypothesis that these novel materials resist erosion for a longer period compared to epoxy-based materials stands, then we will have an alternative to epoxy-dominated markets for space, as well as earth-based applications.”

Additional information can be found in a recent article published on the ISS National Lab web page.