In a new study, researchers reported a comparative study about the detection performance of fluorescent 2D metal-organic framework (MOF) nanosheets and 3D bulky MOFs, highlighting the advantages of 2D.

In recent years, fluorescent metal-organic frameworks (MOFs) have been demonstrated as a promising strategy for constructing sensors. However, most of the research studies on fluorescent MOF sensors have focused on the design and synthesis of three-dimensional (3D) MOF crystals of the order of micrometers and have not exerted the best detection performance of MOF structures. Two-dimensional (2D) MOF nanosheets have the potential to break the limitations of 3D MOFs in sensitivity, response speed etc, due to the ultra-thin morphology, larger specific surface area and more exposed active sites.

In a study published in Dalton Transactions, a team led by Prof. XU Weihong from the Hefei Institutes of Physical Science (HFIPS) of the Chinese Acadamy of Sciences (CAS) reported a comparative study about the detection performance of fluorescent 2D metal-organic framework (MOF) nanosheets and 3D bulky MOFs, highlighting the advantages of 2D.

In this work, fluorescent 2D NH2-MIL-53(Al) nanosheets were developed as a fluoride detection sensor. By comparing it with 3D bulk counterpart, the researchers found it exhibited excellent fluorescence stability, and high selectivity towards fluoride in water through the fluorescence-enhanced sensing behavior. 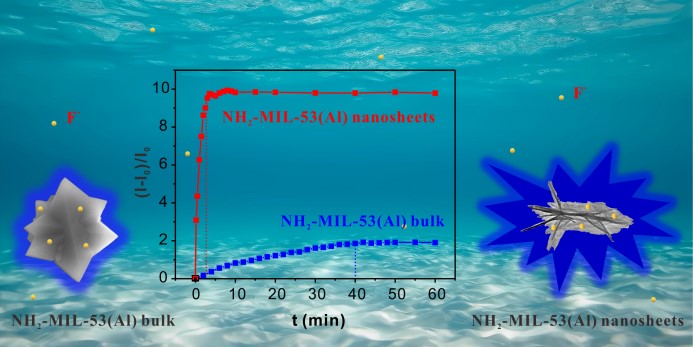 "The response speed of the nanosheets was as short as 10 seconds," said Prof. XU, "limit of detection was lower, and linear detection ranges towards fluoride was wider. All performances were better than those of their bulk counterpart."

Besides, the sensing mechanism was investigated to be based on the transformation of the NH2-MIL-53(Al) framework that induced the release of fluorescent ligands resulting in an exceptionally enhanced fluorescence.