Pulsed Lasers in Liquids Speed Up the Hunt for Effective Catalysts

Chemical catalysts are the change agents behind the production of just about everything we use in our daily lives, from plastics to prescription drugs. When the right catalysts are mixed with the right chemical compounds, molecules that would otherwise take years to interact do so in mere seconds.

However, developing even one catalyst material to trigger this precise choreography of atoms can take months, even years, when using traditional wet chemistry procedures that use only chemical reactions, often in the liquid phase, to grow nanoparticles.

University of Rochester researchers say there is a way to shorten that process dramatically—by instead using pulsed lasers in liquids to quickly create carefully tuned, systematic arrays of nanoparticles that can be easily compared and tested for use as catalysts.

The process is described in a Chemical Reviews article by Astrid Müller, an assistant professor of chemical engineering at the University of Rochester who has adapted the technique for her work on sustainable energy solutions. Three PhD students in her lab—coauthors Ryland Forsythe, Connor Cox, and Madeleine Wilsey—conducted an exhaustive review of almost 600 previous papers involving the use of pulsed lasers in liquids. As a result, their article is the most comprehensive, up-to-date survey of a technology that was first developed in 1987.

Pulsed lasers in liquids an ‘indispensable tool’ for discovering catalysts

So how does pulsed-laser-in-liquid synthesis work?

– A pulsed laser is directed at a solid material immersed in liquid. This creates a high-temperature, high-pressure plasma near the surface of the solid.

– As the plasma decays, it vaporizes molecules in the surrounding liquid, leading to a cavitation bubble. Within the bubble, chemical reactions begin to occur between particles from the liquid and particles that were ablated, or knocked loose, from the solid.

– After periodic expansions and contractions, the cavitation bubble violently implodes, causing shock waves and rapid cooling. Nanoparticles from the bubble condense in small clusters that are injected into the surrounding liquid and become stable.

A pulsed laser beam (green) strikes a solid immersed in liquid, triggering a sequence of events that create uniform nanoparticles with controlled properties.

The pulsed-laser-in-liquids technique offers multiple advantages over traditional wet-lab synthesis of nanomaterials. According to Müller:

– Because the reactions are confined primarily within the cavitation bubble, the resulting nanoparticles have remarkably uniform properties. “Every particle that is made is created under the same conditions,” she says.

– The properties of the nanoparticles can be easily fine-tuned by adjusting the laser pulses and the chemical compositions of the solid and surrounding fluid.

– Laser-made nanocatalysts are intrinsically more active than those obtained by wet chemistry methods.

– Metastable nanomaterials with non-equilibrium structures and compositions can easily be produced. Such materials cannot be made under moderate temperatures and pressures.

– Laser synthesis can be controlled remotely, increasing the potential for large-scale industrial applications.

– Pulsed-laser-in-liquids synthesis of nanomaterials is also far more rapid than traditional methods. The technique can prepare bulk quantities of a nanoparticle in an hour or less. Systematic arrays of 70 materials can be made in a week.

She says, “This is what compelled us to write this paper, because the Müller group can bring together the perspectives of all three fields.”

How catalysts can combat climate change

While working as a staff scientist at Caltech, Müller pioneered an adaption of the laser-in-liquids technique to prepare nonprecious water-splitting electrocatalysts that liberate oxygen from water to produce clean hydrogen. At Rochester, the Müller group expands on her expertise to study laser-made electrocatalysts as a way to turn climate-damaging carbon dioxide (CO2) into a closed cycle of useful liquid fuels, such as methanol or ethanol.

“If you were to burn these fuels again, you make CO2 again, so you go round and round. The carbon always stays within the cycle, and does not contribute to more climate change,” Müller says. “For that to work we need catalysts, and no one knows yet what those catalysts would be—what would work and why, and why other catalysts don’t work.”

Hence her interest in using pulsed-laser-in-liquid synthesis to accelerate the process. “It is hugely important because we can’t just sit and hope for the best with climate change; we need to work on successor technologies now,” she says. 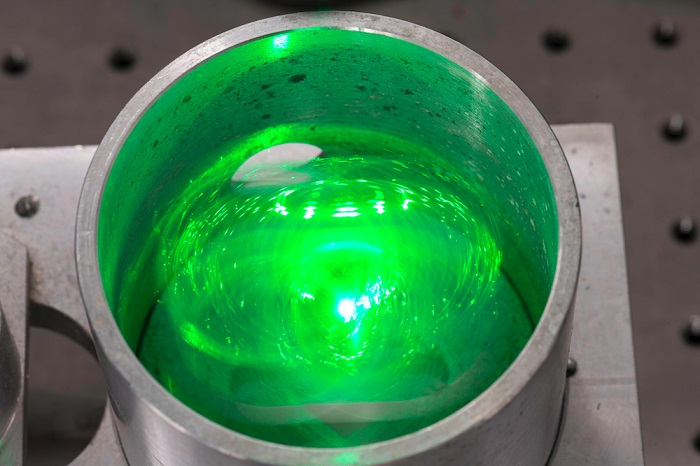 So far, pulsed-laser-in-liquid synthesis has had only limited commercial use. The start-up cost of investing in laser technology is a stumbling block for many companies, Müller says. “But that will change as this method gets more and more traction,” she believes.

Thanks to Müller’s lab, pulsed-laser-in-liquids synthesis is certainly getting more attention. Within three weeks, their paper had become a catalyst of its own by being downloaded more than 1,500 times.