A Novel Route to Energy Saving Technologies in the IT Sector: Controlling Ferrimagnets by Voltage

For the first time, an international research team with participants from Chemnitz University of Technology and IFW Dresden demonstrate 180° magnetization reversal purely by electric fields via magneto-ionic control of ferrimagnets– publication in Nature Nanotechnology.

The rapid increase in energy consumption related to digital technologies is a major global challenge. One key problem is the reduction of the energy consumption of magnetic data storage devices, which are used, for example, in large data centers.

An international research team lead by the Massachusetts Institute of Technology (MIT) and with participation of Prof. Karin Leistner and Dr. Jonas Zehner from the Professorship of Electrochemical Sensors and Energy Storage at the Institute of Chemistry at Chemnitz University of Technology (previously head of the research group Magneto-ionics and Nanoelectrodeposition at the Leibniz Institute for Solid State and Materials Research (IFW) Dresden) now demonstrate 180° magnetization reversal by voltage-induced hydrogen loading into ferrimagnets.

Besides the participants from MIT and Chemnitz University of Technology, the research team included scientists from the University of Minnesota, Korea Institute of Science and Technology and ALBA Synchrotron in Barcelona. The lead was taken by the material scientists Dr. Mantao Huang and Prof. Geoffrey Beach from MIT, experts in hydrogen-based magneto-ionic devices and spintronics.

The results were published in the renowned journal Nature Nanotechnology. 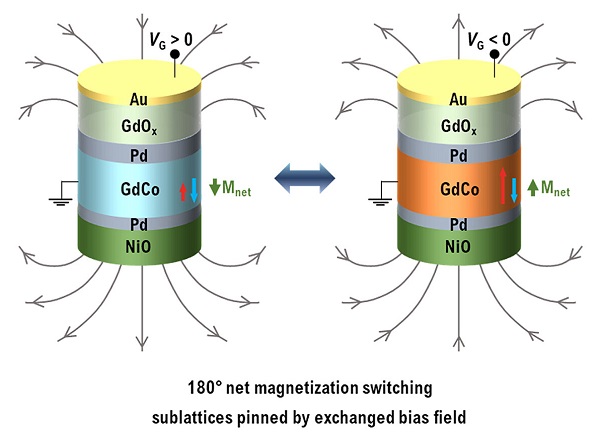 For ferrimagnetic gadolinium-cobalt (GdCo) the researchers could demonstrate that the relative sublattice magnetizations can be reversibly toggled by voltage-induced hydrogen loading/unloading. For this, the GdCo was combined with a gadolinium oxide (GdOx) layer as solid state electrolyte and a palladium (Pd) interlayer. By applying a gate voltage across the structure, protons are driven to the bottom electrode and lead to hydrogenation of the Pd/GdCo layer. The introduction of hydrogen into the GdCo lattice leads to a stronger reduction of the sublattice magnetization of Gd than that of Co. This so-called magneto-ionic effect is stable over more than 10 000 cycles. It could be evidenced by element-specific X-ray magnetic circular dichroism (XMCD) spectroscopy and is the foundation of the demonstrated magnetization switching.

Prof. Karin Leistner and Dr. Jonas Zehner brought in their expertise on the transfer of magneto-ionic control to exchange bias systems. „My group intensively studies the combination of magneto-ionic systems with aniferromagnetic layers and we are by now experts in the magneto-ionic control of exchange bias,” explains Prof. Karin Leistner. During his PhD time in the research group of Karin Leistner at the IFW Dresden, Jonas Zehner took the opportunity of a 6 month research stay in the group of Prof. Beach at MIT.  During this research stay, together with Prof. Karin Leistner and Prof. Geoffrey Beach, Jonas Zehner initiated and optimized the exchange-bias layer structure required for the 180° magnetization reversal. For this, he first combined the magneto-ionic model system Co/GdOx with antiferromagnetic NiO. He prepared thin film systems by magnetron sputtering and analyzed the influence of thickness, composition and layer sequence on the resulting exchange bias and magneto-ionic control.  The magnetic properties during hydrogen loading were measured with a home-built magneto-optical Kerr Effect setup. With these experiments, he discovered that an ultrathin Pd layer between the GdCo and the NiO is crucial to stabilize the exchange bias effect.

Read the original article on Chemnitz University of Technology.