Why Boiling Droplets Can Race Across Hot Oily Surfaces

The commonplace phenomenon, now quantified for the first time, could be harnessed for many useful applications.

When you’re frying something in a skillet and some droplets of water fall into the pan, you may have noticed those droplets skittering around on top of the film of hot oil. Now, that seemingly trivial phenomenon has been analyzed and understood for the first time by researchers at MIT — and may have important implications for microfluidic devices, heat transfer systems, and other useful functions.

A droplet of boiling water on a hot surface will sometimes levitate on a thin vapor film, a well-studied phenomenon called the Leidenfrost effect. Because it is suspended on a cushion of vapor, the droplet can move across the surface with little friction. If the surface is coated with hot oil, which has much greater friction than the vapor film under a Leidenfrost droplet, the hot droplet should be expected to move much more slowly. But, counterintuitively, the series of experiments at MIT has showed that the opposite effect happens: The droplet on oil zooms away much more rapidly than on bare metal.

This effect, which propels droplets across a heated oily surface 10 to 100 times faster than on bare metal, could potentially be used for self-cleaning or de-icing systems, or to propel tiny amounts of liquid through the tiny tubing of microfluidic devices used for biomedical and chemical research and testing. The findings are described today in a paper in the journal Physical Review Letters, written by graduate student Victor Julio Leon and professor of mechanical engineering Kripa Varanasi.

In previous research, Varanasi and his team showed that it would be possible to harness this phenomenon for some of these potential applications, but the new work, producing such high velocities (approximately 50 times faster), could open up even more new uses, Varanasi says. 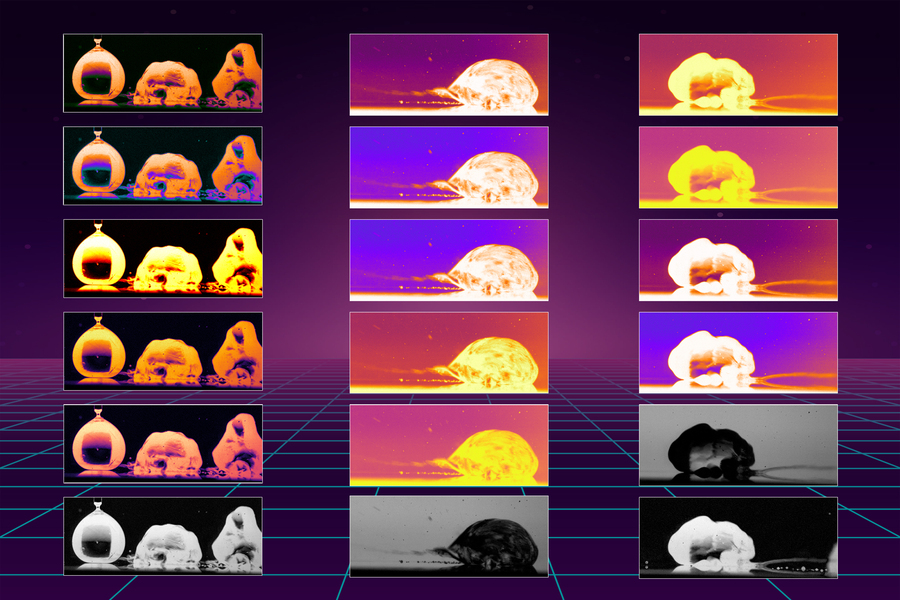 Researchers have determined why droplets are propelled across a heated oily surface 100 times faster than on bare metal. Pictured are various photographs of the droplets that help reveal the mechanisms that cause the rapid motion.

After long and painstaking analysis, Leon and Varanasi were able to determine the reason for the rapid ejection of these droplets from the hot surface. Under the right conditions of high temperature, oil viscosity, and oil thickness, the oil will form a kind of thin cloak coating the outside of each water droplet. As the droplet heats up, tiny bubbles of vapor form along the interface between the droplet and the oil. Because these minuscule bubbles accumulate randomly along the droplet’s base, asymmetries develop, and the lowered friction under the bubble loosens the droplet’s attachment to the surface and propels it away.

The oily film acts almost like the rubber of a balloon, and when the tiny vapor bubbles burst through, they impart a force and “the balloon just flies off because the air is going out one side, creating a momentum transfer,” Varanasi says. Without the oil cloak, the vapor bubbles would just flow out of the droplet in all directions, preventing self-propulsion, but the cloaking effect holds them in like the skin of the balloon.

The phenomenon sounds simple, but it turns out to depend on a complex interplay between events happening at different timescales.

This newly analyzed self-ejection phenomenon depends on a number of factors, including the droplet size, the thickness and viscosity of the oil film, the thermal conductivity of the surface, the surface tension of the different liquids in the system, the type of oil, and the texture of the surface.

In their experiments, the lowest viscosity of the several oils they tested was about 100 times more viscous than the surrounding air. So, it would have been expected to make bubbles move much more slowly than on the air cushion of the Leidenfrost effect. “That gives an idea of how surprising it is that this droplet is moving faster,” Leon says.

As boiling starts, bubbles will randomly form from some nucleation site that is not right at its center. Bubble formation will increase on that side, leading to the propulsion off in one direction. So far, the researchers have not been able to control the direction of that randomly induced propulsion, but they are now working on some possible ways to control the directionality in the future. “We have ideas of how to trigger the propulsion in controlled directions,” Leon says.

Remarkably, the tests showed that even though the oil film of the surface, which was a silicon wafer, was only 10 to 100 microns thick — about the thickness of a human hair — its behavior didn’t match the equations for a thin film. Instead, because of the vaporization the film, it was actually behaving like an infinitely deep pool of oil. “We were kind of astounded” by that finding, Leon says. While a thin film should have caused it to stick, the virtually infinite pool gave the droplet much lower friction, allowing it to move more rapidly than expected, Leon says.

The effect depends on the fact that the formation of the tiny bubbles is a much more rapid process than the transfer of heat through the oil film, about a thousand times faster, leaving plenty of time for the asymmetries within the droplet to accumulate. When the bubbles of vapor initially form at the oil-water interface, they are  much more insulating that the liquid of the droplet, leading to significant thermal disturbances in the oil film. These disturbances cause the droplet to vibrate, reducing friction and increasing vaporization rate.

It took extreme high-speed photography to reveal the details of this rapid effect, Leon says, using a 100,000 frames per second video camera. “You can actually see the fluctuations on the surface,” Leon says.

Initially, Varanasi says, “we were stumped at multiple levels as to what was going on, because the effect was so unexpected. … It’s a fairly complex answer to what may look seemingly simple, but it really creates this fast propulsion.”

In practice, the effect means that in certain situations, a simple heating of a surface, by the right amount and with the right kind of oily coating, could cause corrosive scaling drops to be cleared from a surface. Further down the line, once the researchers have more control over directionality, the system could potentially substitute for some high-tech pumps in microfluidic devices to propel droplets through the right tubes at the right time. This might be especially useful in microgravity situations, where ordinary pumps don’t function as usual.

It may also be possible to attach a payload to the droplets, creating a kind of microscale robotic delivery system, Varanasi says. And while their tests focused on water droplets, potentially it could apply to many different kinds of liquids and sublimating solids, he says.