Next Generation Electronics: Expanding the Possibilities with Silver Nanowires

Today’s nanoscale technologies are sophisticated enough to be applied in an endless number of useful devices, from sensors in touch screen devices and household appliances to wearable biosensors that can monitor chemical levels in our blood, muscle movement, breathing and pulse rate. In addition, there are technologies for precision devices such as high-resolution scanning probe microscopes which enable one to visualize surfaces not only at the atomic level, but even the individual atoms themselves.

These devices typically utilize electrodes which are made by applying thin coatings of conductive materials onto glass or ceramic substrates. However, these types of electrodes are fragile and lack flexibility, and they can involve costly and limited materials as well as difficult fabrication methods.

An alternative material which is receiving much attention is silver nanowires; these wires have very small diameters (as small as one-thousandth of a millimeter) and can be fabricated into various cross-sectional shapes and configurations. They are also unsurpassed in conductivity, have superior mechanical strength and flexibility and can easily be synthesized with readily available materials. These qualities and silver nanowires’ versatility make them especially attractive not only for many commonly used electronic devices but for innovations in flexible electronics, such as flexible cell phones and tablets, inexpensive solar panels or solar cells that can be fabricated onto wallpaper or clothing. 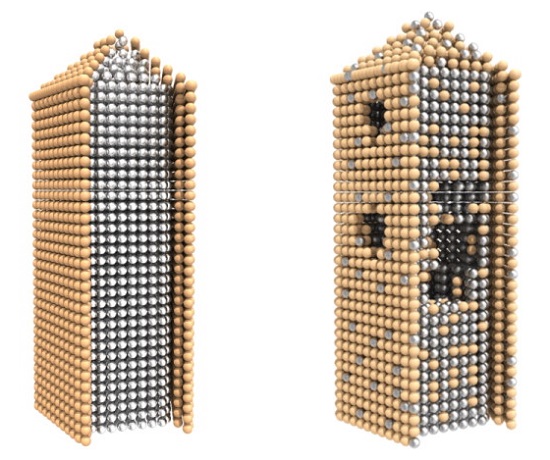 Silver nanowires have been successfully employed as electrodes in various electronic devices; however, their commercial usage has been hampered by their vulnerability to the corrosive effects of heat, light, and moisture. Such corrosion can result in pits and holes or “etching” on the nanowire surface, which negatively affects their electrical, mechanical, and optical properties. Etching can be highly detrimental to silver nanowire-based device performance and can even lead to their failure.

Previous attempts have been made to fabricate protective shells around silver nanowires. In one attempt, a thin polymer was deposited onto a substrate as a nanowire barrier. Protective thin metal or carbon shells have also been grown onto the nanowires’ surfaces. This increased the longevity and performance of silver nanowires used as transparent electrodes; however, the shell surfaces lacked the uniform smoothness needed for more high-precision devices.

Researchers from the Terasaki Institute for Biomedical Innovation (TIBI) have successfully developed a method for fabricating ultrathin shells around silver nanowires, resulting in superior stability and effectiveness.

They first chose gold for their protective shells due to its resistance to heat, light, and moisture. Its structure is also similar to silver’s, which facilitates the growth of ultrathin layers of gold on the silver nanowire surfaces. However, there is a caveat: charged gold atoms may exist that can react with the silver itself, forming holes or pores, which would be distinctly problematic. The TIBI team solved this problem by choosing a chemical to complex with the charged gold atoms; this effectively suppressed pore formation.

The team next developed a room temperature, solutions-based fabrication method which offered easy setup and straightforward, scalable steps. In addition, their method allowed the adjustment of reaction times and mixtures to control the thickness of the gold layers deposited.

They synthesized silver nanowires by combining solutions and allowing the nanowires to grow and crystallize. The gold solution, which contained experimentally optimized chemicals to eliminate etching and to aid in the smooth deposition of gold layers, was then introduced. They also optimized experimental conditions to improve the chemical stability of the nanowires.

The resultant silver nanowires had well-defined, three nanometer-thick gold coatings, with smooth surfaces, free of etching. They also exhibited a stabilizing silver-gold interface, which is imperative in preserving the nanowires’ optical and electrical properties.

“We considered every possible challenge in designing an effective method to increase longevity of silver nanowire-based devices,” said Yangzhi Zhu, Ph.D., first author of the project.“Our data clearly shows that we were able to create effective solutions to these challenges.””
The TIBI team then conducted experiments to evaluate the gold-coated and untreated silver nanowires’ durability. When nanowires were exposed to air; the uncoated silver nanowires became heavily damaged and deteriorated after ten days. The gold-coated nanowires remained unchanged even after six months. Similar results were obtained after both nanowires were exposed to the damaging effects of hydrogen peroxide and sodium-buffered saline submersions.

In performance tests of flexible transparent electrodes, both nanowires were exposed to high heat and humidity; the non-coated nanowires failed after 12 days, but the gold-coated silver nanowires’ performance was comparable to top-performing commercial nanowires.

In performance tests on optical devices, the gold-coated nanowires demonstrated high performance at 21 days. In contrast, the untreated silver nanowires exhibited decreased efficiency within a week and eventually failed. Furthermore, the tests showed that no additional background noise was introduced by the gold shells.

Within the same time frame, the gold-coated nanowires exhibited superior results when tested in high-resolution scanning probe microscopy, delivering unwavering high-quality images. In contrast, the image quality from the untreated nanowires gradually decreased until device failure occurred. These are notable achievements, as this type of microscopy involves high levels of mechanical stress and nanowire stability is crucial.

“There are many advantages to using silver nanowires in countless devices, so the ability to improve their performance and durability creates a big impact,” said Ali Khademhosseini, Ph.D., Director and CEO of TIBI. “The methods we’ve devised to achieve that exemplify the quality of our institute’s work.”