A team of researchers from the Hong Kong University of Science and Technology (HKUST) has developed an inexpensive, lightweight, and non-toxic (lead-free) photo-battery that has dual functions in harvesting solar energy and storing energy on a single device, making it possible to charge a battery under the sun, without having to plug the device into the wall.

The increasing demand for sustainable energy sources has driven a surge of interest in solar energy and developing storage devices for it. One such device, the photo-battery, is capable of both generating and storing energy in a single device architecture. In theory, this design should permit increased energy storage efficiency and energy density, while decreasing ohmic losses, relaxing packaging requirements and thus reducing the weight, the bulk, and the cost of the system.  In reality, however, the poor interface between materials tends to create problems with charge transport, greatly reducing the efficiency in comparison to the simple system of a solar cell wired to an external battery. 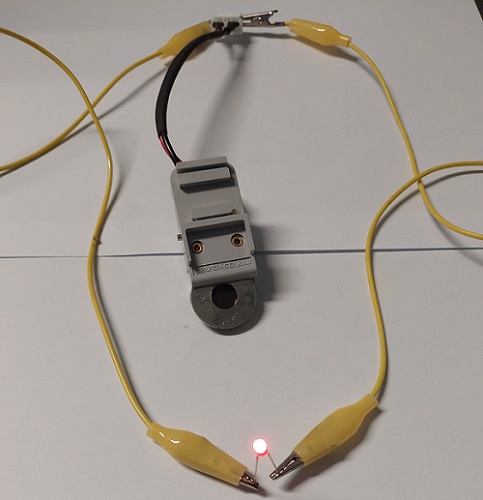 A team led by Prof. Jonathan Eugene HALPERT, Assistant Professor from the Department of Chemistry at HKUST, has made advancements towards developing more efficient photobatteries by expanding the utility of a class of materials known as perovskite, which has had applications in solar cells and most recently in batteries.  The perovskite halide the team developed acts as a photoelectrode that can harvest energy under illumination without the assistance of an external load in a lithium-ion battery, and is in stark contrast with its existing counterpart for it does not contain lead, hence it has higher stability in air and is free from the concerns of lead poisoning. For their research, the team has replaced lead with bismuth (Bi), a non-toxic element, and forming a strongly light-absorbing crystalline material. 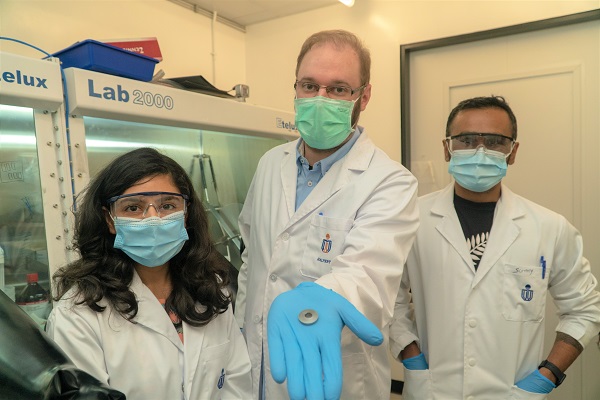 A research team led by Prof. Jonathan Eugene HALPERT, Assistant Professor from the Department of Chemistry at HKUST, develops an an inexpensive, lightweight, and lead-free photo-battery that has dual functions in harvesting solar energy and storing energy on a single device.

The lithium-ion battery works by allowing electrons to move from a high energy state to a lower one, while doing work in an external circuit.  The photobattery has a mechanism similar to an ordinary battery except that it need not be supplied current or plugged into the wall to be charged electrically, but can be charged photoelectrically under the sun.  The active material in this new battery is the lead-free perovskite which, when put under light, absorbs a photon and generates a pair of charges, known as an electron and a hole.  The team conducted chrono-amperometry experiments under light and in dark to analyze the increase in charging current caused by the light, and recorded a photo-conversion efficiency rate of 0.428% on photocharging the battery after the first discharge.  The next step of the team is to experiment with different materials for better performance and efficiency, so that the photobattery can be commercialized in the market.

“At present, we plug all our appliances into the wall to charge them. With further development in this field of photobatteries, we might not have to plug them in at all in the future,” said Prof. Halpert.  “We might be able to harvest solar energy and use it to fulfil the power requirements of any devices with modest power needs.  Our work is one of the initial steps taken in this field, and, of course, a lot of improvements will be needed to achieve better performance, but we are confident that we can improve its stability and average efficiency with further refinement.”

This photobattery can serve as the built-in battery for devices such as smartphones or tablets, and even remote energy storage applications, which can be made easy with these photobatteries for they are lightweight and portable.  It should also help lower production cost when compared to a system consisting of a solar cell plus an external battery since only the battery part is required.

This study was recently published in the scientific journal Nano Letters on June 16.