Why is Pancreatic Cancer So Hard to Treat?

“In pancreatic cancer treatment, no matter how excellent a drug may be, it is difficult to deliver it to cancer cells in the first place. Many studies aimed to improve drug delivery in the past five years, but all of them failed. Nanoliposomal irinotecan (nal-IRI, brand name: Onivyde) using new nanotechnology showed successful results in a phase 3 trial in the second-line treatment of pancreatic cancer. But this study is rarely known and underrated. Still, nal-IRI became reimbursable in August, so there will be a little more treatment options for pancreatic cancer in Korea.”

Professor Chon Hong-jae of medical oncology at CHA Bundang Medical Center made these and other points while explaining the difficulty improving the pathophysiology of pancreatic cancer at the Best of ASCO 2021, a conference held by the Korean Society of Medical Oncology on Friday. 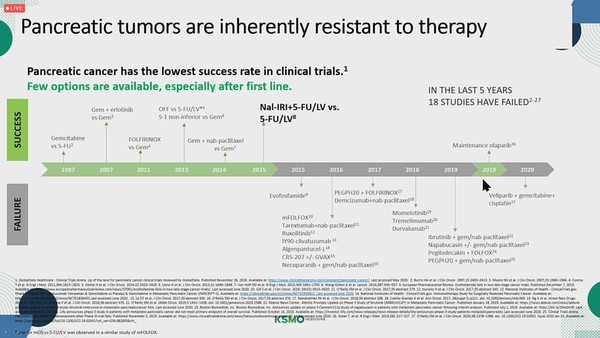 “Targeted therapies and immunotherapies have significantly improved treatment outcomes in various types of cancer, but pancreatic cancer is the only one that did not receive such benefits,” Chon said.

For over 20 years, physicians have used gemcitabine as the standard treatment for pancreatic cancer.

The FOLFIRINOX therapy consisting of oxaliplatin, leucovorin, irinotecan, and 5-fluorouracil and the combo of gemcitabine and albumin-bound paclitaxel proved improvement in overall survival in 2011 and 2014, respectively.

The two treatment strategies are used as the first-line standard therapy.

Until nal-IRI arrived in 2015, there was no second-line treatment for patients who failed in the first-line therapy. They had to try the remaining drugs not used in the primary treatment.

“In pancreatic cancer, the extracellular matrix in the dermis is abundant, and this causes compression of the blood vessels and limits the drug delivery. So, the problem is that no matter how good a drug is, it cannot reach cancer cells well,” he explained. “Many researchers are studying how they can resolve this issue.”

In addition, the tumor microenvironment suppresses immunity, which makes it almost impossible for pancreatic cancer patients to benefit from immunotherapies, he said.

Considering these characteristics of pancreatic cancer, researchers conducted a PEGPH20 trial, but the study failed.

According to Chon, PEGPH20 was one of the options to improve drug delivery. The treatment candidate can dissolve hyaluronic acid around the extracellular matrix, and it showed some improvement effect in the basic study, he said. However, two phase 3 trials all failed, and the strategy did not work.

Another method is to utilize nanotechnology to improve drug delivery, Chon went on to say. “The nanotechnology worked much better in pancreatic cancer than in other types of cancer,” he said.

Chon cited nal-IRI as the second drug that successfully proved efficacy with nanotechnology.

“Strictly speaking, nal-IRI is less than 100 nanometers, so it is difficult to say that it is a nanomaterial, but the drug indeed used nanotechnology,” he said.

The treatment’s drug delivery technology fills the water-soluble space with irinotecan. Then, the PEGylation technology makes the liposome’s exposure time in plasma longer to accumulate it in cancer cells, he added.

According to Chon, nal-IRI is absorbed by cancer cells or macrophages, becomes irinotecan through metabolism, and then becomes SN-38, an active metabolite, to act on tumors.

Compared to the existing irinotecan, nal-IRI significantly improved the time of exposure to plasma and tumors, he said.

However, nal-RIR is somewhat underestimated in real clinical scenes, despite its proven effect in a phase 3 study, Chon noted.

It was challenging to develop nal-IRI, but the developer was not a large multinational drugmaker. This made it difficult to promote the drug and its evaluation, Chon said.

A Taiwanese pharmaceutical company developed nal-IRI until a phase 2 study, and Merrimack Pharmaceuticals acquired the drug candidate to conduct a phase 3 trial. Then Baxter, Baxalta, and Servier bought the right to the drug. Servier is supplying the treatment in Korea.

The FOLFIRINOX therapy or gemcitabine plus albumin-bound paclitaxel strategies, now used in the second-line treatment of pancreatic cancer, were not proven through trials but an expansion of the first-line treatment.

In contrast, nal-IRI is “the only treatment option that showed effectiveness through a phase 3 study (NAPOLI-1),” Chon emphasized.

The NAPOLI strategy (nal-IRI+5-fluorouracil/leucovorin), recommended as the second-line therapy by the guidelines, could not be used in Korea because it was not reimbursable.

Read the original article on KBR.