An international team has reported in Nature the first observation of ghost polaritons, which are a new form of surface waves carrying nanoscale light strongly coupled with material oscillations and featuring highly collimated propagation properties. The research team observed these phenomena over a common material – calcite – and showed how ghost polaritons can facilitate a superior control of infrared nano-light for sensing, signal processing, energy harvesting and other technologies.

In recent years, nanophotonics at infrared and terahertz frequencies has become important for highly sensitive, ultracompact and low-loss technologies for bio-molecular and chemical diagnosis, sensors, communications and other applications. Nanomaterial platforms that can facilitate enhanced light-matter interactions at these frequencies have become essential for these technologies. Recent work has been using low-dimensional van der Waals materials, such as graphene, hexagonal boron nitride and alpha-phase molybdenum trioxide (α-MoO3, Nature 2018), because of their highly exotic response to confined light at the nanoscale. However, these emerging nanomaterials require demanding nanofabrication techniques, hindering large-scale nanophotonic technologies. 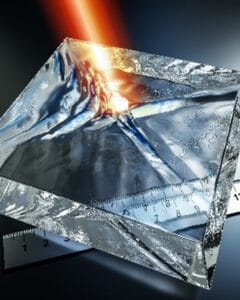 Illustration of ghost polaritons propagating away from a point source over a calcite surface.

Writing in Nature on 18th August 2021, a highly collaborative international team led by scientists at the City University of New York Advanced Science Research Center at the Graduate Center, Huazhong University of Science and Technology (HUST), National University of Singapore (NUS) and National Center for Nanoscience and Technology (NCNST) has reported that calcite —a well-known bulk crystal commonly used in other technologies—can naturally support ghost polaritons.

The team explored light interactions with calcite and found unexpected infrared phonon polariton responses. They demonstrated that calcite, which can be easily polished, can support ghost polariton surface waves that feature complex, out-of-plane momentum totally different from any observed surface polariton to date.

“Polaritonics is the science and technology of exploiting strong interactions of light with matter, and it has revolutionized optical sciences in the past few years,” said Andrea Alù, Einstein Professor of Physics at the Graduate Center and Founding Director of the Photonics Initiative at the Advanced Science Research Center at the CUNY Graduate Center. “Our discovery is the latest example of the exciting science and surprising physics that can emerge from exploring polaritons in conventional materials like calcite.”

“We have been thrilled to find a new solution of Maxwell’s equations featuring complex, out-of-plane momentum. And even more excitingly, we have been able to observe it in a very common crystal.” says Guangwei Hu, co-first author, NUS postdoctoral fellow and long-term visitor at CUNY.

“This type of polaritons can be tuned through their optical axis, introducing a new way of manipulation of polaritons, said Cheng-Wei Qiu, Dean’s Chair professor at NUS. “We believe our findings will stimulate exploration of various optical crystals for nanoscale light manipulation.”

Read the original article on Advanced Science Research Center at The Graduate Center of the City University of New York.