Placenta accreta spectrum (PAS) disorder is a life-threatening condition that occurs when the placenta remains attached to the uterus after childbirth. Now NIBIB-funded researchers have developed a blood test for rapid identification of this condition, enabling timely intervention by high-risk pregnancy specialists.

Although it occurs in less than 0.5% of pregnancies, PAS disorder is a serious condition in which the placenta anchors too deeply into the uterine wall during pregnancy. The condition can result in significant blood loss during labor and delivery requiring blood transfusions and intensive care to avoid serious complications, or more tragically, the death of the mother. 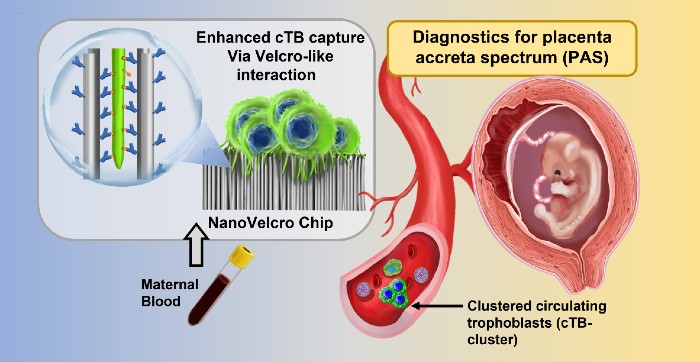 Currently, mothers with a history of pregnancy complications are examined with ultrasound for indications of PAS. However, women without such history can also be at risk for PAS making the current screening protocol insufficient.

Developed by an international team from the UCLA and Cedars Sinai Medical Center in Los Angeles, University of Utah in Salt Lake City, and research institutions in China, the blood test can be performed in the first trimester of pregnancy, which allows for early referrals to doctors who specialize in high-risk pregnancies.

The new approach uses a technology called the NanoVelcro Chip, which has been developed over the past 15 years by Dr. Yazhen Zhu and Hsian-Rong Tseng, UCLA professors of molecular and medical pharmacology. The chip was originally created to detect tumor cells in the blood of cancer patients. The team adapted the chip so that it could detect placenta cells in maternal blood samples.

The chip detects a specific cell type associated with the onset of PAS known as circulating trophoblasts. The NanoVelcro test is relatively simple and was designed to be easily done within the normal workflow of healthcare facilities providing prenatal care. It requires only 2 milliliters of blood, from which cells are isolated and incubated on the test chip overnight. The number of trophoblasts and trophoblast clusters captured by the NanoVelcro chip is then counted using a fluorescent microscope. Thus, the identification of an abnormal number of trophoblasts and trophoblast clusters—indicating increased risk of PAS—can be determined in less than 24 hours.

“The development of this type of innovative, yet simple test for PAS is an outstanding example of the types of technologies that the National Institute of Biomedical Imaging and Bioengineering (NIBIB) supports to improve maternal and prenatal care worldwide,” explains Tiffani Lash, PhD, director of the NIBIB program in Point-of-Care Technologies-Diagnostics.

“Recent population studies have shown that half to two‐thirds of cases of PAS disorders remain undiagnosed before delivery highlighting the crucial need to develop new technologies for prenatal detection,” explains Dr. Margareta Pisarska from Cedars Sinai Medical Center, co-senior author of the work. “Our study demonstrates a promising noninvasive technology for detecting PAS that does not rely on expensive imaging instruments or expertise making it accessible for a range of point-of-care settings including in low resource areas.”

The team credits the success of their work to a multidisciplinary approach that convened experts in obstetrics, pathology, nanotechnology, engineering, and microfluidics. The group is currently exploring ways to refine the test to improve its accuracy and reliability.

The study was reported in Nature Communications.

Read the original article on NIBIB.