Femtosecond light creates switchable nano-waves in MXenes and moves the materials’ atoms at a record-breaking speed – discovery made by physicists from Konstanz and Zurich.

Ultrafast laser spectroscopy allows to observe the motion of atoms at their natural time scales in the range of femtoseconds, the millionth of a billionth of a second. Electron microscopy, on the other hand, provides atomic spatial resolution. By combining electrons and photons in one instrument, the group of Professor Peter Baum at the University of Konstanz has developed some of the fastest electron microscopes for obtaining detailed insight into materials and their dynamics at ultimate resolutions in both space and time.

In their recent publication in ACS NANO, scientists from the Baum lab have applied this technique together with colleagues from ETH Zurich to study novel materials – two-dimensional molecularly defined sheets called MXenes – and made a surprising discovery. Using laser pulses, MXenes can be switched repeatedly between a flat and a rippled shape, opening up a wide spectrum of possible applications. 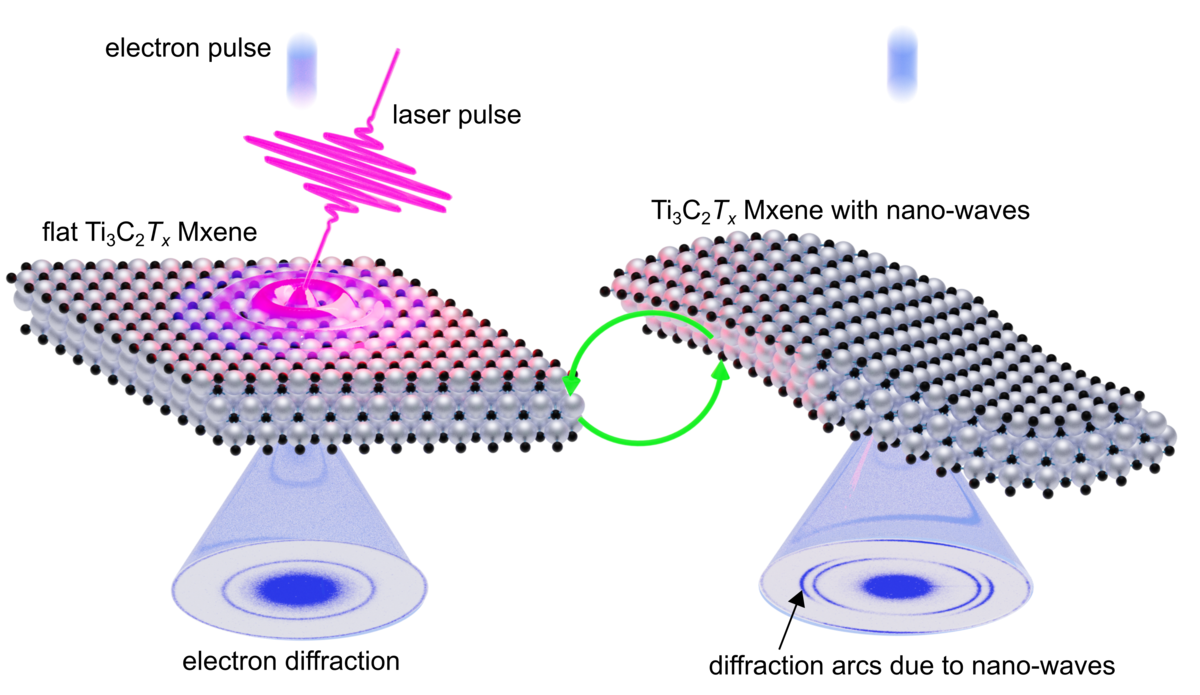 MXenes are two-dimensional sheets of transition metal carbides or nitrides in the form of few-atom-thick single layers. “MXenes are comparable to a molecule in one spatial dimension and to an extended solid in the other two”, Dr Mikhail Volkov, first author of the recent study, describes the structure of MXenes. MXenes are synthesized by "peeling off" the thin layers of material from a precursor material – a process called exfoliation.

In contrast to most other single-layer materials, MXenes can be easily produced in large quantity, thanks to the discovery of a scalable and irreversible chemical exfoliation method. The chemical and physical properties of MXenes can be widely tuned by the choice of the transition metal, leading to widespread applications of MXenes in sensing, energy storage, light harvesting, and antibacterial action.

In their study, primary investigators Dr Mikhail Volkov from the University of Konstanz and Dr Elena Willinger from ETH Zurich have found a new way to enhance the properties of MXenes by shining fast light pulses on them. Using ultrafast electron microscopy with atomic spatial resolution, they recorded a movie of MXenes interacting with femtosecond laser pulses, showing that the laser energy transfers to the atomic lattice in a record-breaking time of merely 230 femtoseconds.

Unexpectedly, the scientists also found that femtosecond laser light can be used to switch back and forth between the originally flat surface structure of the MXene and a nano-wave form of the material – a hill-and-valley “nano-landscape” with a periodicity that is more than fifty times finer than the laser wavelength. “We can control the nano-wave’s orientation with the polarization of the laser, which means the material has an optical memory on the nanoscale. Moreover, if the laser strikes again, the nano-waved MXene turns back into a plane and remains flat during illumination. The extremely small size of the nano-waves and the fast lattice reaction are also quite surprising, and a phenomenon called plasmon-phonon coupling is likely involved”, explains Volkov.

“Nano-structuring in the form of waves also increases the surface-to-volume ratio of the materials, making them chemically more reactive. In addition, it enhances the local electro-magnetic fields, improving the coupling with light – a valuable property for sensing applications,” says Volkov. The scientists therefore expect the discovered nano-waved MXenes to show improved energy storage capacity and enhanced catalytic or antibiotic activity. “Finally, the possibility to switch the structure of MXenes between plane and wavy ‘on demand’ via a laser pulse opens up intriguing ways to use the materials in active plasmonic, chemical and electric devices”, Volkov concludes.

Read the original article on University of Konstanz.