Sieving Ions with a Polymer Membrane

Ion-sieving polymer membranes can perform with exquisite precision by gaining unprecedented control over pore size and uniformity within the membranes, KAUST researchers have shown.

The biological nervous system works by selective transport of electrically charged particles called ions through cell membranes. If manufactured membranes were able to achieve a similar ion selectivity, it could transform many technologies, including water purification, mineral extraction and energy storage. 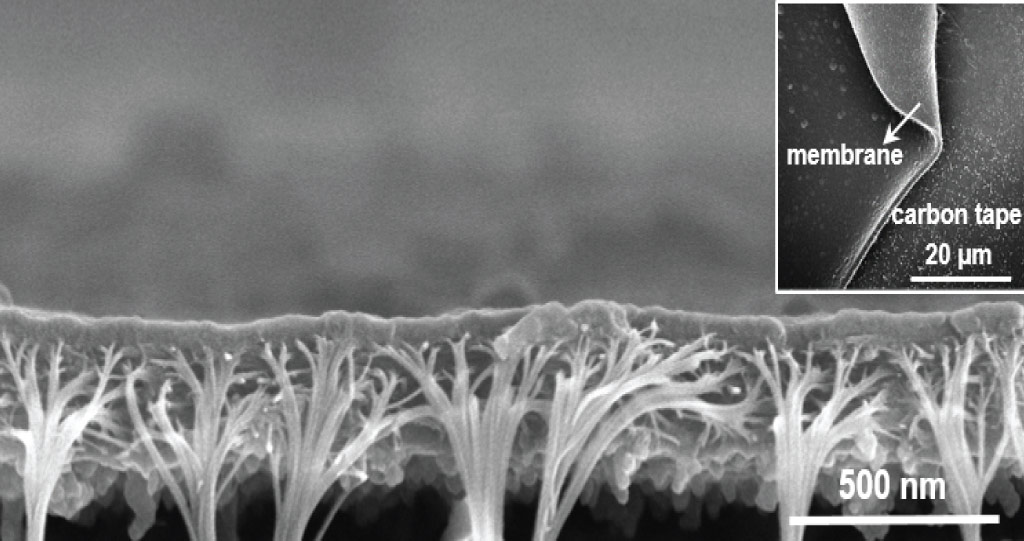 The innovative polymer membrane developed by KAUST scientists has great potential in many energy- and environment-related ion separation processes.

Ions are formed when atoms or molecules lose or gain electrons, therefore gaining a positive or negative electrical charge. Those derived from single atoms, such as sodium (Na+), lithium (Li+) or chloride (Cl-) ions, are smaller than 1 nanometer (10-9 meters) across. The researchers used the known sizes of ions to conduct simulation studies, which helped identify suitable monomers that could act as the molecular units  needed to link into a conjugated microporous polymer (CMP) membrane structure.

They then used a process called electropolymerization to make their polymer membranes. This process uses a cyclical electric current to control the precise structure that forms when the 1,3,5-tris(N-carbazolyl) benzene monomer molecules link together.

“It was challenging to determine the resulting pore size and level of porosity because of the asymmetric membrane structure,” says Lai, adding, “to overcome this issue we had to make hundreds of samples.”

The tiny size and nature of the pores prevented their analysis from using many common structural determination methods, but a solution was found in gas physisorption, which studies the interaction of a material with gases.

In tests using solutions containing a range of ions, the membranes proved to have a selective ion-sieving performance superior to almost all other reported membranes.

“This demonstrates that our innovative polymer membranes have great potential in many energy- and environment-related ion separation processes,” says Zongyao Zhou. Removing ions from seawater to produce drinkable water is one obvious possibility. Rechargeable batteries and other energy storage systems also depend on controlling the movement of ions.

Zhou says that the next target for the team is to explore the potential of the membranes to be used in a variety of innovative chemical sensors. Many chemicals of environmental or medical interest consist of ions. Membranes that selectively allow ions of interest to pass through the membranes could be used in a new generation of more precise and flexible sensor technology.