Research into the human gut and the microbes key to its work—the gut microbiome—has boomed over the last decade or so because scientists have learned that the overall system has a much larger impact on our bodies than previously thought. Imbalances of chemicals produced in the gut, for example, have been linked to diseases including Parkinson’s and Alzheimer’s, and even hyperactivity in kids. Meanwhile, scientists are also working to create better diagnostics and therapies for diseases specific to the gut, like colon cancer.

“The challenge is that the gut is like a black box. We still don’t fully understand it because it’s difficult to access and study,” says Maria Eugenia Inda, a Pew Postdoctoral Fellow at MIT’s Department of Electrical Engineering and Computer Science (EECS).

Inda and colleagues report a new approach to solve that problem in the journal Advanced Functional Materials. Their work involves encapsulating living bacteria in a tiny, flexible disc of hydrogel that is ingested. Those bacteria, in turn, can detect compounds that could indicate disease. After eventual excretion of the disc, the bacteria within the disc can be analyzed to determine what they’ve detected and in what concentrations.

To keep these living sensors in the gut long enough to do their work, rather than being naturally excreted within six to 48 hours, the team made the disc magnetic. Combined with a small wearable magnet, this keeps the system in place internally for several days. Take off the magnet, and the sensor with its data is excreted and ready for analysis.

“This exciting technology offers a much-needed tool to help control and understand imbalances of chemicals produced in the gastrointestinal tract,” says Giovanni Traverso, the Karl Van Tassel (1925) Career Development Professor in MIT’s Department of Engineering. Traverso was not involved in the research.

“We developed new soft materials such as the magnetic hydrogels and studied their extreme mechanics such as deformation and adhesion in the gut. In collaboration with the Lu lab, we explored soft materials’ impacts on living materials and biomedicine,” says Zhao.

Many Challenges
The Advanced Functional Materials paper reports important advances toward making the hydrogel-bacteria system in the gut a reality. For example, the researchers describe the best “recipe” for the hydrogel disc that allows it to not only provide a home for the bacterial sensors—and allow them to reproduce—but also survive the movements and pressures associated with the intestinal system without breaking up or becoming dislodged.

The team showed that the bacteria could indeed survive and thrive in the hydrogel disc for up to seven days. In mice, the bacteria successfully sensed bleeding in the gut. Further, in a model of the human gut the scientists showed that the wearable magnet kept the disc in place at several different locations, including the small intestine and the ascending colon.

In addition to the bacterial sensors, the team also incorporated into the hydrogel a tiny electronic temperature sensor. That, too, worked, showing the potential for integrating both microelectronics and living sensors into the hydrogel system.

Inda emphasizes the collaborative nature of the work. The hydrogel experts such as Xinyue Liu, for example, aimed to make the gel matrix tough enough to survive inside the gut. The biologists, such as Inda, focused on keeping the bacteria alive within the hydrogel disc. Together they developed a system that achieved both goals.

Toward the Future
Inda notes that while it may take a while for the system to be used in humans, “it could be used today in laboratory mice.” 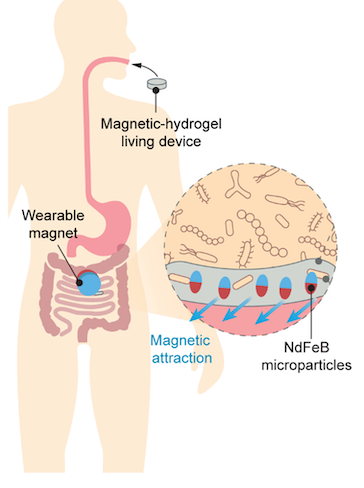 Schematic illustrating the use of living sensors encapsulated in a magnetic hydrogel device for studies of the gut.

Rabia Yazicigil is an assistant professor in the Department of Electrical and Computer Engineering at Boston University. Says Yazicigil, who was not involved in the research, "By localizing diagnostic bacteria in specific regions of the gut, biological hypotheses and treatments can be conveniently tested in animal models, for example, through dietary change, therapeutics, or genetic alteration of host or microbes."

And those tests, in turn, should result in new insights with applications to humans.