Researchers have designed electromechanically reconfigurable ultrathin optical elements that can be controlled and programmed on a pixel-by-pixel level. These versatile metasurfaces could offer a new chip-based way to achieve nanoscale control of light, which could lead to better optical displays, information encoding and digital light processing.

“Metasurfaces are ultrathin and compact optical elements that can be used to manipulate the amplitude, phase and polarization of light,” said research team leader Jiafang Li from the Beijing Institute of Technology in China. “Although most metasurfaces are static and passive, we created metasurfaces that mechanically deform in response to electrostatic forces.”

In The Optical Society (OSA) journal Optics Express, the researchers describe how they created the new metasurfaces using nanoscale techniques inspired by kirigami, a variation of origami that includes cutting as well as folding. This allowed them to create tiny units that transform from 2D designs into 3D structures when a voltage is applied.

“We were able to create a dynamic holographic display using our reconfigurable metasurface,” said Li. “These optical elements could lead to new types of devices with optical multitasking and rewritable functionalities. They might also be used in real-time 3D displays and high-resolution projectors, for example.”

Spiral patterns that transform from 2D to 3D

To create the new metasurfaces, the researchers designed a repeating 2D pattern of two combined spirals that are etched into a gold nanofilm and suspended above silicon dioxide pillars. The units are arranged in a square lattice with just two microns of space between each one. When a voltage is applied, the spirals deform due to electrostatic forces. This transformation, which is reversable and repeatable, can be used to dynamically modulate the optical properties of the metasurface. 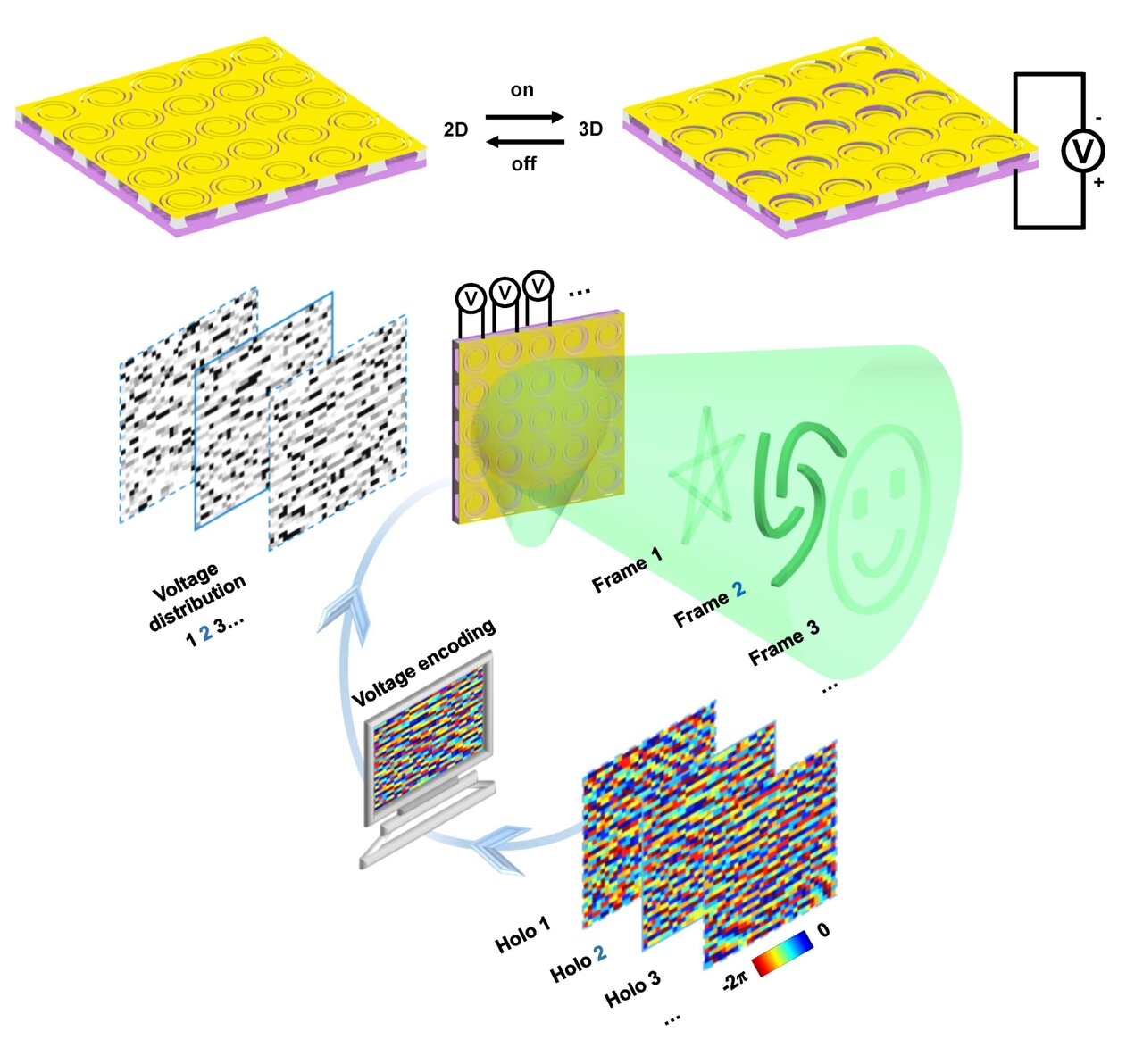 Researchers designed reconfigurable metasurfaces with 2D spirals that deform when a voltage is applied. Each of the spiral units act as a pixel and can be independently manipulated. The researchers demonstrated the metasurface by using it to create a hologram display.

As a proof-of-concept demonstration, the researchers used these metasurfaces to demonstrate beam control and to make a holographic display. “We were able to reconstruct images from the metasurface by merely controlling the voltage bias, proving the feasibility of our scheme for effective light modulation,” said Li.

The researchers plan to explore strategies that can be used to achieve pixelated voltage control, such as the multi-line addressing method used to drive several rows simultaneously in commercial OLED displays. To make the technology more practical, they are also working to improve the signal-to-noise ratio and modulation quality of the reconfiguration system.