Electrochemical reactions that are accelerated using catalysts lie at the heart of many processes for making and using fuels, chemicals, and materials — including storing electricity from renewable energy sources in chemical bonds, an important capability for decarbonizing transportation fuels. Now, research at MIT could open the door to ways of making certain catalysts more active, and thus enhancing the efficiency of such processes.

A new production process yielded catalysts that increased the efficiency of the chemical reactions by fivefold, potentially enabling useful new processes in biochemistry, organic chemistry, environmental chemistry, and electrochemistry. The findings are described today in the journal Nature Catalysis, in a paper by Yang Shao-Horn, an MIT professor of mechanical engineering and of materials science and engineering, and a member of the Research Lab of Electronics (RLE); Tao Wang, a postdoc in RLE; Yirui Zhang, a graduate student in the Department of Mechanical Engineering; and five others. 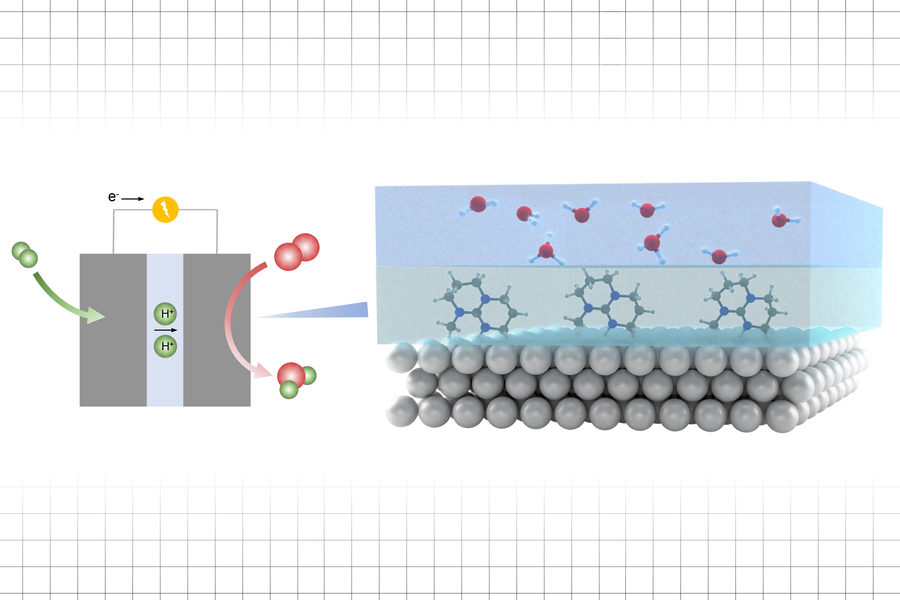 This diagram illustrates the new process for enhancing reaction rates in an electrocatalytic process. The catalyst layer, made of gold or platinum, is shown as gray spheres at the bottom, and the material to be catalyzed is shown as the rad spheres at the top. Adding a layer of ionic liquid in between, shown as the hexagonal lattices, can increase reaction rates by fivefold. At left, a detail of how oxygen (red) and hydrogen (green) can combine to form water at an enhanced rate through this process.

“There is an urgent need to decarbonize how we power transportation beyond light-duty vehicles, how we make fuels, and how we make materials and chemicals,” says Shao-Horn, emphasizing the pressing call to reduce carbon emissions highlighted in the latest IPCC report on climate change. This new approach to enhancing catalytic activity could provide an important step in that direction, she says.

Using hydrogen in electrochemical devices such as fuel cells is one promising approach to decarbonizing fields such as aviation and heavy-duty vehicles, and the new process may help to make such uses practical. At present, the oxygen reduction reaction that powers such fuel cells is limited by its inefficiency. Previous attempts to improve that efficiency have focused on choosing different catalyst materials or modifying their surface compositions and structure.

In this research, however, instead of modifying the solid surfaces, the team added a thin layer in between the catalyst and the electrolyte, the active material that participates in the chemical reaction. The ionic liquid layer, they found, regulates the activity of protons that help to increase the rate of the chemical reactions taking place on the interface.

Because there is a great variety of such ionic liquids to choose from, it’s possible to “tune” proton activity and the reaction rates to match the energetics needed for processes involving proton transfer, which can be used to make fuels and chemicals through reactions with oxygen.

“The proton activity and the barrier for proton transfer is governed by the ionic liquid layer, and so there’s a great tuneability in terms of catalytic activity for reactions involving proton and electron transfer,” Shao-Horn says. And the effect is produced by a vanishingly thin layer of the liquid, just a few nanometers thick, above which is a much thicker layer of the liquid that is to undergo the reaction.

“I think this concept is novel and important,” says Wang, the paper’s first author, “because people know the proton activity is important in many electrochemistry reactions, but it’s very challenging to study.” That’s because in a water environment, there are so many interactions between neighboring water molecules involved that it’s very difficult to separate out which reactions are taking place. By using an ionic liquid, whose ions can each only form a single bond with the intermediate material, it became possible to study the reactions in detail, using infrared spectroscopy.

As a result, Wang says, “Our finding highlights the critical role that interfacial electrolytes, in particular the intermolecular hydrogen bonding, can play in enhancing the activity of the electro-catalytic process. It also provides fundamental insights into proton transfer mechanisms at a quantum mechanical level, which can push the frontiers of knowing how protons and electrons interact at catalytic interfaces.”

“The work is also exciting because it gives people a design principle for how they can tune the catalysts,” says Zhang. “We need some species right at a ‘sweet spot’ — not too active or too inert — to enhance the reaction rate.”

With some of these techniques, says Reshma Rao, a recent doctoral graduate from MIT and now a postdoc at Imperial College, London, who is also a co-author of the paper, “we see up to a five-times increase in activity. I think the most exciting part of this research is the way it opens up a whole new dimension in the way we think about catalysis.” The field had hit “a kind of roadblock,” she says, in finding ways to design better materials. By focusing on the liquid layer rather than the surface of the material, “that’s kind of a whole different way of looking at this problem, and opens up a whole new dimension, a whole new axis along which we can change things and optimize some of these reaction rates.”