It took a nanoscale construction project on par with the much larger ones peppering Nebraska highways, but physicist Xia Hong is now directing the haphazard traffic of electrons well enough to analyze it — and, down the road, put it to use in next-gen technology.

Hong and her University of Nebraska–Lincoln colleagues have devoted the past few years to studying what happens, and what can be achieved, when depositing nanoscopically thin materials atop one another. She’s been busy topping atomic layers of semiconductors — which conduct electricity better than insulators but not so well as metals — with ferroelectrics, whose alignment of positive and negative charges, or polarization, can be instantly switched by applying an electric field to them. 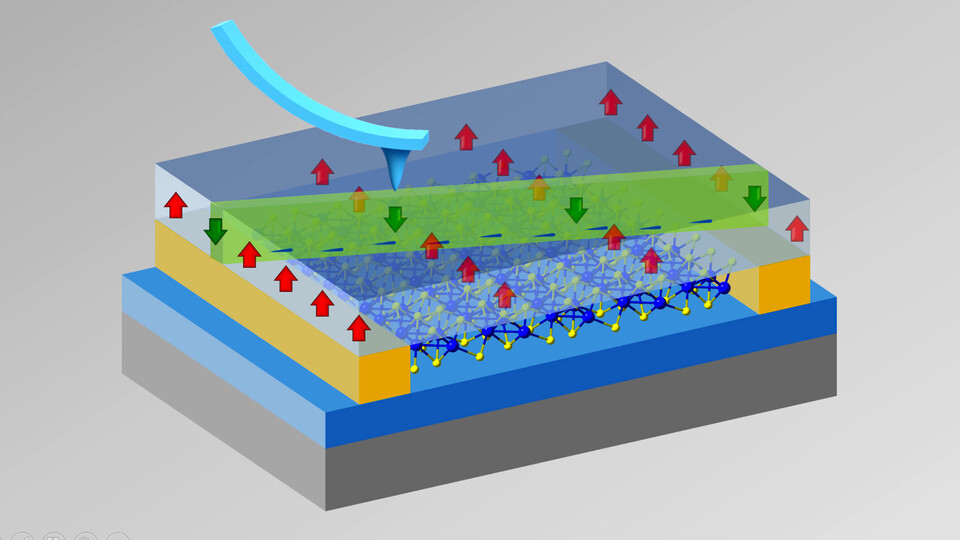 A rendering of a nanoscopically thin polymer (semitransparent blue) atop a semiconductor known as rhenium disulfide (blue and yellow atoms). By layering the materials, then flipping the polarization of a narrow sliver (green) within the polymer, Nebraska’s Xia Hong and colleagues have managed to more precisely control the flow of electricity and demonstrate a technologically important property of the rhenium disulfide.

Using the approach, Hong has already induced all sorts of interesting, technologically appealing and, maybe best of all, reconfigurable phenomena in the underlying semiconductors. In a new study, her team layered a ferroelectric polymer atop a semiconductor known as rhenium disulfide. Prior research had suggested that rhenium disulfide boasts a prized property: the ability to transport electrons, or conduct electricity, much more readily in some directions than others. That quality, known as anisotropy, gives electrical engineers much greater and needed control over the flow of electric current.

But actually measuring, investigating and manipulating the phenomenon had proven difficult, partly due to the fact that electrons coursing through even the thinnest slice of rhenium disulfide are liable to sideswipe or T-bone each other.

Hong’s solution? Lock in the polarization of the overlying polymer and effectively transform the underlying semiconductor into an insulator that resisted the flow of electricity. Then, flip the polarization of the polymer — but only in a 300 nanometer-wide ribbon that bisected the overlying ferroelectric material. The result: a thin, conductive nanowire in the otherwise insulating layer of rhenium disulfide beneath it. Or, as Hong described it, a lone highway for electrons amid an unpassable desert.

With the electron traffic confined to just that path, Hong and her Husker colleagues were ready to study its flow with unprecedented levels of precision. When they did, they discovered that rhenium disulfide’s conductivity depends, to an extraordinary degree, on the orientation of the path itself.

If that path is close to parallel with an axis defined by the arrangement of atoms in the material, it conducts electricity almost as well as a metal. If the path is instead perpendicular to that axis, though, the conductivity drops precipitously. In fact, the angle-dependent difference in conductivity — its anisotropy — is about 5,000 times larger than any reported in a 2D, ferroelectric-controlled configuration to date.

“So we used this very special technique to confirm, for the first time, that the anisotropy is huge,” said Hong, associate professor of physics and astronomy at Nebraska.

Surprisingly, Hong said, the anisotropy was largest when measuring it in rhenium disulfide that was four atomic layers thick. It was also in the four-layer version that her team’s measurements aligned most closely with theoretical predictions contributed by Evgeny Tsymbal, George Holmes University Professor of physics and astronomy.

Part of the reason? Adding some layers subtracted some complexity, Hong said. Multiple factors can influence anisotropy in single-layer rhenium disulfide. But the extreme conductivity difference in the four-layer version can be predicted by its so-called band structure alone: how many electrons can populate an energy level that allows them to begin migrating and, by doing so, conduct electric current. That energy band flattens in certain directions as layers get added, the researchers concluded, producing more traffic jams among electrons and escalating the directional differences in conductivity.

“Most people would tend to focus on a monolayer,” Hong said. “But we found, actually, that it’s the few-layer material that’s more interesting.”

Hong said that knowledge, and the magnitude of the effect itself, could make rhenium disulfide especially useful for crafting lenses that focus electrons in much the way that optical lenses do rays of light. Electron lenses help yield extraordinarily high-resolution imagery of nanoscopic objects that cannot be resolved with light.

“This material has, intrinsically, an ability to make electrons only move effectively in one direction,” Hong said. “So we can use this as a building block for those lenses.”

Its anisotropy, combined with other properties inherent to the atomic makeup of rhenium disulfide, might also position the material as a fruitful playground for generating and controlling a range of phenomena much wider than most materials can claim, Hong said.

“I think this is a material,” she said, “in which you could host magnetism or superconductivity, for example.

“We think this is a starting point. So we want to use this as a host material and, probably with some manipulation, learn to turn these phenomena on and off.”

The researchers reported their findings in the journal Physical Review Letters.

Read the original article on University of Nebraska-Lincoln.