A new, 3D-printable polymer nanocomposite ink has incredible properties — and many applications in aerospace, medicine and electronics.

Mechanical engineering researchers at Michigan Technological University have created a way to make a 3D-printable nanocomposite polymeric ink that uses carbon nanotubes (CNTs) — known for their high tensile strength and lightness. This revolutionary ink could replace epoxies — and understanding why its properties are so fantastic is a first step toward its mass use.

3D printing, also known as additive manufacturing, is more versatile and efficient than casting. It adds a material with precision, often in complex geometries, with considerably less excess to  cut away. Adding low-dimensional nanomaterials such as CNTs, graphene, metal nanoparticles and quantum dots allows 3D-printed materials to adapt to external stimuli, giving them features such as electrical and thermal conductance, magnetism and electrochemical storage. 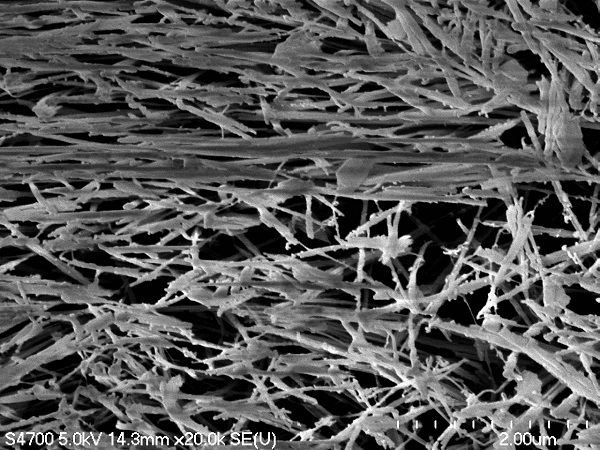 Alignment of nanomaterials in the direction of 3D printing shown using electron microscopy after plasma etching of the polymer.

But 3D printing using plastic, metal or something else entirely isn’t new. What Tech researchers have done differently is use polymer nanocomposites (made of epoxy, carbon nanotubes and nano-clay) and a printing process that doesn’t sacrifice functionality. The junction of material type and morphology — size, shape, structure — in polymer nanocomposite inks is the ultimate in form meeting function.

The exploration of process, morphology and properties of polymeric inks is the subject of an article recently published in the journal Additive Manufacturing by Parisa Pour Shahid Saeed Abadi, an engineer who explores the interface of materials, mechanics and medicine, and graduate student Masoud Kasraie.

Abadi and Kasraie point out that before researchers can sprint off to the races using polymeric inks, they must first learn to walk. The first step is digging into the intersection of the macro scale (how our eyes see a material performing) and the nano scale (what we can’t see, but know is occurring).

While polymer nanocomposites and 3D-printing products and services both have billion-dollar market values, nanomaterial 3D printing only has a market value of approximately $43 million, Abadi noted.

“For national prosperity and sustaining global leadership in manufacturing, the gap between the real-world applications of 3D printing and nanomaterials versus nanomaterial 3D printing needs to be closed,” Abadi said. “The gap exists due to lack of control of nanocomposite properties in the 3D-printing process, because we don’t fully understand the process-morphology-property relationship.”

The bottleneck is understanding the complex interplay between the macro-scale mechanics of 3D-printing processes and the nano-scale mechanics and physics of nanocomposites. Abadi and Kasraie’s research seeks to loosen the bottleneck by exploring the relationship between 3D-printing process parameters and nanomaterial morphology in nanocomposite printing inks, which is the most important but least explored piece of the puzzle.

The Many Benefits of Nanomaterial Ink

Moving beyond the science of nanocomposite ink, the material holds great promise because of its many functionalities. One advantage of 3D printing is near-complete control over the final product’s shape.

The conductivity of Abadi and Kasraie’s nanomaterial ink is an exceptionally handy trait that gives the printed epoxy the potential to double as electrical wiring — whether in a circuit board, an airplane’s wing or in 3D-printed actuators for guiding catheters in blood vessels. Another useful trait of the nanocomposite polymer ink is its strength.

“In comparison with steel and aluminum, we see 80% weight reduction with epoxy composite with same strength,” Kasraie said.

Finally, in the medical field and aerospace and electronics industries, where defects and damage can spell big trouble, the nanocomposites serve a safety function.

“When something breaks, a tiny crack starts from a microscale defect and progresses until it breaks the entire structure,” Abadi said. “Nanocomposite features make bridges in those cracks and don’t let the cracks grow. This is one of the mechanisms through which carbon nanotubes increase the mechanical strength of the material.”

Property-to-weight ratio, electrical conductivity, increased strength and ease of application are just a few of the many promising reasons why polymer nanocomposite inks will likely replace traditional epoxies.