Ultrathin Quantum Dot LED That Can be Folded Freely as Paper

The new device can be folded into complex 3D structures such as butterflies, airplanes, and pyramids.

Quantum dot light-emitting diode (QLED), which employs quantum dots as a light-emitting material, has attracted significant attention as a promising alternative for next-generation display technologies, owing to its outstanding electroluminescence properties. Since it does not require any bulky components such as backlight units, QLED displays can potentially be manufactured into an ultrathin form factor. A joint research team led by KIM Dae-Hyeong (Professor at Seoul National University) and HYEON Taeghwan (Distinguished professor at Seoul National University) from the Center for Nanoparticle Research within the Institute for Basic Science has previously unveiled a prototype QLED back in 2015. The device had a thickness of only 3 micrometers, which is only one-thirtieth of that of human hair. Due to such an extremely reduced thickness, the ultrathin QLED exhibited outstanding mechanical flexibility, which allowed it to be readily applicable in various wearable devices, such as electronic tattoos.

Recently, the team further advanced this technology and developed a foldable variant of the ultrathin QLED, inspired by the ancient art of paper folding known as origami. The IBS researchers reported three-dimensional foldable QLEDs, which can be freely transformed into various user-customized 3D structures, such as butterflies, airplanes, and pyramids. Considering the rising popularity of foldable smartphones, the advancement of foldable display technology is gaining greater importance. It is expected this technology can provide unprecedented opportunities for next-generation electronics with user-customized form factors with complex structures, as well as allowing for dynamic three-dimensional display of visual information.

The researchers endowed foldability to the conventional planar QLED via a new fabrication process that can partially etch the epoxy film deposited on the QLED surface without damaging the underlying QLED. Using a power-controllable carbon dioxide pulsed laser and the silver-aluminum alloy-based etch-stop layers, the etching depth can be precisely controlled. As the laser-etched part of the device is relatively thinner than the surrounding region, it is possible to etch out deformation lines along which the device can be folded like origami paper.

Based on the selective laser-etching technique, researchers were able to precisely control the radius of curvature down to less than 50 micrometers. Under such a small curvature radius, the fold line resembles a sharp edge with no visible curvature. By using mechanical simulation to carefully engineer the device, researchers were able to minimize the strain loaded on the light-emitting components. The entire QLED including the crease region (a fold line) was able to maintain a stable light-emitting performance even when after it was repeatedly folded 500 times. The technology was applied to fabricate 3D foldable QLEDs with various complex shapes such as butterflies, airplanes, and pyramids. 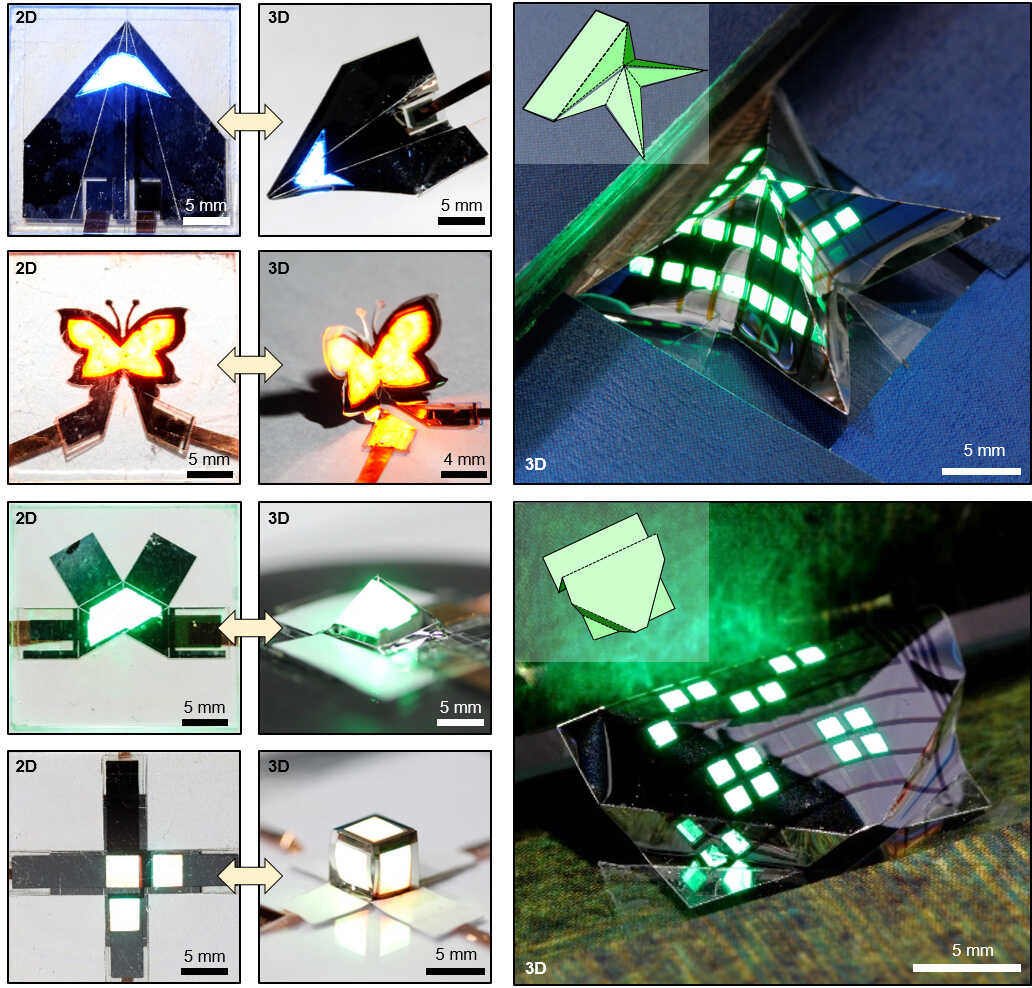 The ultra-thin QLED can be sharply folded along the laser-etched line, just like the origami paper artwork. A three-dimensional foldable QLED with various user-customized shapes such as airplanes, butterflies, and pyramids was fabricated. The 3D foldable QLED can freely transform between 2D and 3D structures, which allows for a dynamic display of visual information.

“We were able to build a 3D foldable QLED that can be freely folded just like a paper artwork”, said KIM Dae-Hyeong, the vice-director of the Center for Nanoparticle Research. He also said, “By fabricating the passively driven, 3D foldable QLED arrays composed of 64 individual pixels, we have shown the possibility of developing displays with greater complexity in the future.” HYEON Taeghwan, the director of the Center for Nanoparticle Research, states that “Through the technology reported in this research, paper-like QLEDs that can be folded into various complex structures have been successfully fabricated. Who knows when the day will come when electronic paper with a display unit can replace real paper?”