The Applications of Nanomaterials Against Viral Disease

Nano-based therapeutics and diagnostic systems are being increasingly applied to various fields of medicine, acting as sensors, delivery vehicles, immunostimulants, radiation sensitizers, and viral inhibitors. In a paper recently published in the journal Pharmaceutics, the application of nanomaterials in the diagnosis, prevention, and treatment of viral diseases is reviewed in detail, highlighting areas of significant progress or stagnation from the past few decades.

Nanomaterials encompass any engineered structure with a monomeric unit in the size range of 1-100 nm. They, therefore, include macroscopic materials with nano-scale surface features and microscopic particles in the nano-size range.

Carbon nanotubes are hollow cylindrical structures with intriguing electric properties that facilitate use in biosensors by incorporation of a specific protein or nucleic acid probes. For example, conjugation with complementary DNA or RNA to the virus being detected creates a high-speed virus sensor with a very low detection limit, where fluctuations in current through the sensor can be used to infer viral load. Flat graphene sheets of carbon can similarly be bound with antibodies or DNA to create sensors that can interact with larger biomolecules than carbon nanotubes owing to a lower degree of curvature exhibited.

Gold nanoparticles exhibit unique light interactions that result in intense adsorption across a narrow range of wavelengths, a phenomenon known as surface plasmon resonance. The wavelength of light most strongly absorbed by the particles is dependent on particle shape and size and can be tuned from the visible to the near infra-red.

Near infra-red light is maximally penetrating through biological tissue, and therefore sensors that rely on optical signaling in this range are ideal as a diagnostic platform. As with carbon nanotubes, relevant complementary molecules can be attached to the particles that will only bind with the virus or antibody under investigation.

Similarly, the specific wavelength of light in resonance with the particles can also be influenced by proximity with other particles. Thus, by inducing inter-particle bonding, the presence of a compound of interest can be determined colorimetrically by the eye. Many lateral flow severe acute respiratory syndrome coronavirus 2 (SARS-CoV-2) detection assays are based on the use of gold nanoparticles, where particles bearing a DNA reporter probe are combined with viral RNA in the sample to generate a visible red line. 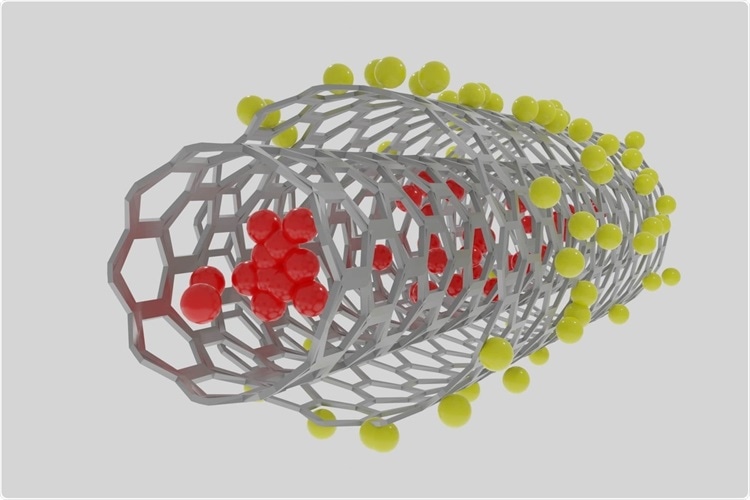 Application of Nanomaterials as an Advanced Strategy for the Diagnosis, Prevention, and Treatment of Viral Diseases.

Nanomaterials have been intrinsic to the development of coronavirus disease 2019 (COVID-19) vaccines, the mRNA-based vaccines utilizing liposomes or lipid nanoparticles as a delivery vehicle. Outside of the cytoplasm, mRNA degrades quickly, and thus liposomes ensure that the payload enters the cell and is available for transcription. An mRNA-based vaccine utilizing liposomes was first developed in 1993 against the influenza virus. Since then, liposomes have been exploited to deliver sensitive biomolecules into the cell in several capacities, such as during CRISPR-Cas9 gene editing.

Nanomaterials are also frequently used as adjuvants in vaccine formulations to stimulate an intense immune response, first employed in a seasonal flu vaccine in 1997 with the incorporation of squalene droplets coated in biocompatible surfactants. Since then, the conjugation of viral antigens onto the surface of nanoparticles has shown great success in stimulating an immune response in several vaccine formulations.

Drug delivery is the major purpose of nanomaterials in disease treatment, generally offering improved pharmacokinetics, drug retention time, and the "drug-likeness" of the compound being delivered.

The physical and chemical properties of the nanoparticle strongly influence the biodistribution of the nanomedicine in the body and the ability and propensity of the particle to enter target cells.

The large surface-to-volume ratio of nanomaterials provides an ample platform on which both targeting ligands and drug payloads may be loaded, allowing for the simultaneous delivery of large quantities of multiple compounds with synergistic effects.

Besides use as a delivery vehicle, nanoparticles themselves may be utilized as virus therapeutics, acting to block the viral replication cycle or cell entry. Silica nanoparticles designed to bind with the influenza virus have shown efficacy in blocking viral entry into cells in this way. Particles constructed from copper, silver, and gold are also capable of generating reactive oxygen species. Besides being directly damaging to viral genetic material can induce apoptosis in infected cells, thereby preventing viral propagation. Such materials can also be coated on high-traffic surfaces such as handrails to destroy any virus or bacteria by exposure to reactive oxygen species.