Researchers in the Department of Mechanical Engineering at the University of Hong Kong (HKU) have made a key breakthrough in droplet manipulation. They have discovered an innovative way to navigate liquids on a surface in the absence of external force or energy.

Droplet resembles a ball. In-plane droplet control is similar to snooker where the balls are directed to move along desired trajectory, a feature highly valued for thermal management, desalination, materials self-delivery, and numerous other applications.

Conventionally, researchers fabricate chemical wetting gradient or asymmetric microtextures to drive droplet into motion, similar to designing a conveyor belt to transport the balls. For the first time, RGC postdoctoral fellow Dr TANG Xin, Postdoctoral fellow Dr. LI Wei, and Chair Professor of Thermal-Fluid Sciences and Engineering WANG Liqiu from the HKU Department of Mechanical Engineering discovered that when a cold/hot or volatile droplet is liberated on a lubricated piezoelectric crystal (lithium niobate) at ambient temperature, the droplet instantaneously propels for a long distance (which can be ~50 times the droplet radius) in furcated routes. Depending on the crystal plane that interfaces with the droplet, the self-propulsion can be unidirectional, bifurcated, and even trifurcated.

The discovery has been published in Nature Nanotechnology in an article titled “Furcated Droplet Motility on Crystalline Surfaces”. 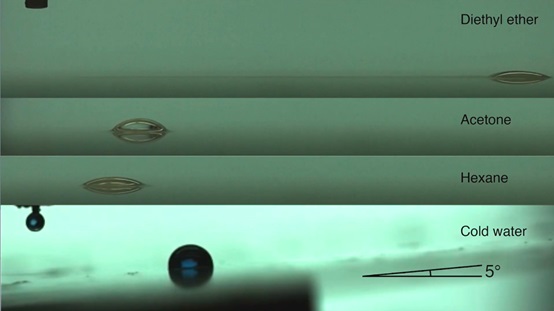 When a cold/hot or volatile droplet is liberated on a lubricated piezoelectric crystal (lithium niobate) at ambient temperature, the droplet instantaneously propels for a long distance.

“This is an unforeseen phenomenon with far-reaching implications. Droplets with a temperature difference mild at 5 °C on a surface can undergo self-sustained propulsion. Imagine placing a ball on a perfectly leveled and smooth table, instead of remaining static, the ball rolls by itself. Even more surprising is that the ball only automatically rolls towards certain definite directions,” said Professor Wang Liqiu.

The researchers have found that the intrinsically orientated liquid motion is fueled by cross-scale thermo-piezoelectric coupling which is caused by the anisotropy of crystal structure. This resembles that a smooth table is atomically arranged in an unusual way such that a symmetric heat source can produce asymmetric electric field that drives a ball into motion in a direction determined by the cutting direction of the table surface.

“The work enables an innovative way to deliver and transport liquids with controllability, versatility and performance, and provides clues for solving some long-standing challenges such as anti-icing, defrost and antifog in humid environments,” said Dr Tang Xin.

As a droplet strikes a supercooled substrate such as that of an airplane wing and power cable, it rapidly freezes and adheres to the surface. In this case, the spontaneous electric force generated by the crystal can perturb the nucleating droplet, potentially decreasing interfacial adhesion and delaying detrimental ice accretion.

Self-propulsion will also upgrade the performance of dropwise condensation by removing growing condensate from the surface, the thermal barrier, and thus potentially providing a very promising solution to droplet manipulation in space where gravity-assisted droplet shedding is absent.

Moreover, the furcated routes may be selectively chosen by adding external disturbances such as subtle electric fields. In this way, the surface can act as a two- or three-way planar valve to deliver droplets containing information, chemical or biological payloads.