Researchers from The University of Tsukuba explore the microstructure of the ground beetle exoskeleton using microscopy .

The striking colors of many creatures in nature result from their structures at a microscopic or even nanoscopic level. A good example of this is the metallic coloring of certain beetles. Researchers have paid increased attention to understanding what causes the effects found in nature, so that they can recreate these properties in so-called biomimetic materials. A team from The University of Tsukuba has taken a very close look at the ground beetle to see what we can learn from its micro/nano structure. Their findings are published in Micron.

Nature provides us with thousands of examples of effective materials that have already been finely tuned to exhibit a wide range of properties from color to strength. It therefore makes sense for researchers to study real samples as inspiration for new developments rather than starting with a blank page.

The eye-catching optical effects of certain species of butterfly and beetle, such as the ground beetle, are excellent examples of what is known as photonic structure. These effects are the result of microscopic regular patterns in the structure and are expected to be translated into interesting applications in materials science. 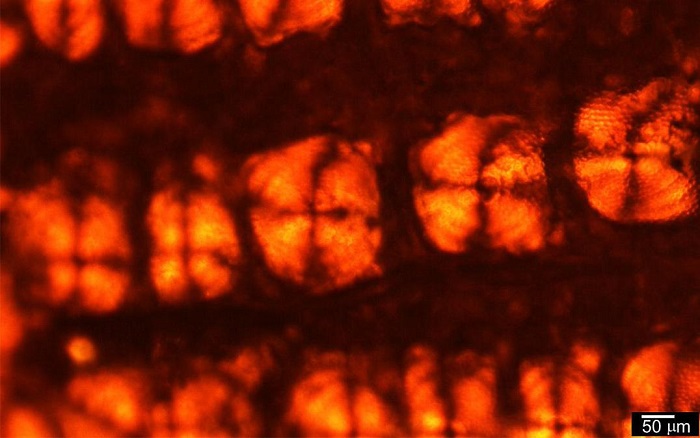 Researchers from The University of Tsukuba explore the microstructure of the ground beetle exoskeleton using microscopy.

"Our POM observations, where we simultaneously used transmitted and reflected light, revealed a particular effect known as a Maltese cross in the inner layer of the wing casing," explains study lead author Professor Hiromasa Goto. "The tiny cross pattern repeated many times indicated that the protein structure inside the wing casing has a cholesteric liquid crystal-like helical structure."

The structures that provide these optical effects also stack to give high mechanical strength, which is another useful property that could be translated into functional materials in the future.

The SEM observations showed that the exoskeleton had a layered structure with a regular hexagonal pattern on the top layer and needle structures on the underside. Synchrotron XRD supported the POM and SEM findings showing evidence for the helical middle layer and hexagonal and needle surfaces.

"This is the first time this particular arrangement of the Maltese crosses has been observed for insects," says Professor Goto. "We hope that this new insight will contribute to the development of a variety of biomimetic materials with enhanced performance based on natural phenomena."