At such a small scale, the world gets weird. Some familiar forces — such as gravity — hardly apply, while other phenomena — like quantum waveforms — have major influence. Even something as basic as the ratio between a particle’s surface area and its volume changes dramatically, with equally dramatic effects.

It is in this weird realm that many NREL researchers are discovering (or creating) key materials for tomorrow’s energy systems. “When you go down to the nanoscale, you often endow materials with properties they wouldn’t otherwise have,” explained Andrew Ferguson, who manages the spectroscopy and photoscience research group at NREL. 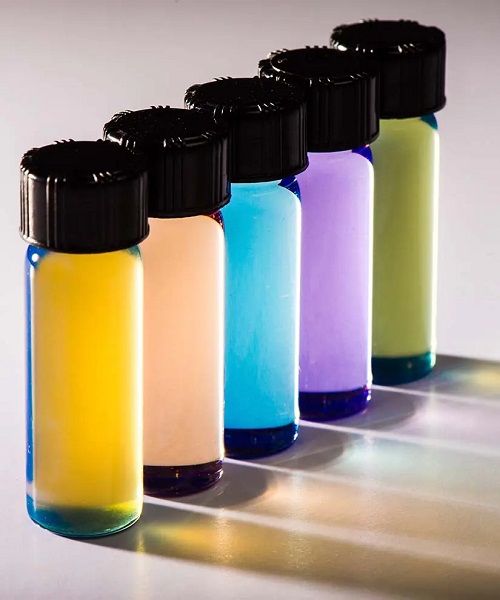 These new properties are a major draw for materials scientists. “I really like the tunability of nanomaterials and how much you can do with them,” said Elisa Miller, an NREL researcher who works on nanoscale layers of semiconductors. “Nanomaterials are popping up everywhere because they’re so versatile.”

This versatility, or “tunability,” is key to NREL’s nanomaterials research. By changing the size, shape, or composition of nanoscale particles and structures, researchers can carefully control their properties. And by combining structures with just the right mix of properties, materials can be made to fit a desired function. “They’re almost like little Lego pieces you can stack together in really neat ways,” said Joey Luther, a senior scientist at NREL. “What makes nanomaterials exciting is that they possess a background of similar properties as larger compounds, but other new and exciting tunable features emerge at the nanoscale that expand the overall scope of applications.”

As one example, semiconductor quantum dots can be tuned to emit specific colors at a nearly 100% efficiency level. (The image above shows a similar effect.) This means that TVs and displays using these quantum dots can offer enhanced color accuracy without sacrificing brightness or using more energy. If you have seen a QLED or an OLED TV, you have seen nanomaterials in action. NREL researchers are hoping to exploit similar properties, or even new ones, in many different applications.

It is no surprise that NREL researchers are studying multiple ways to capture the sun’s energy with nanomaterials. For the next generation of photovoltaic technologies, nanomaterials could allow solar cells to be rapidly manufactured out of more common, less expensive materials. For example, thin films of lead-sulfide or perovskite quantum dots can be easily printed into a solar cell. Such materials can also be “tuned” to absorb different wavelengths of light, making them promising candidates for lower-cost, higher-efficiency multi-layer solar cells.

Due in part to their extremely high surface-area-to-volume ratio, nanomaterials can also act as powerful catalysts to drive many reactions. For example, layers of semiconductors that are only three atoms thick can capture sunlight to power the production of hydrogen gas or other solar fuels.

Sunlight is not the only energy source nanomaterials can harness. The U.S. Energy Information Agency calculates that more than 60% of energy used for electricity generation in the United States is lost as heat. Thermoelectric devices can convert waste heat into electricity. While thermoelectrics are already found in nuclear batteries, such as those found on some spacecraft, nanoscale structures could make these devices more efficient and lower-cost, enabling them to draw heat from more terrestrial sources.

NREL researchers are also studying electronic ratchets, devices that can harvest radio frequency signals or electrical noise to produce an ordered electrical current. New materials, such as carbon nanotubes, are helping to boost the efficiency of these devices, offering a fundamentally new method of distributed energy production.

Computer Transistors With a Memory

NREL’s nanoscale research goes beyond energy and chemical production, also exploring ways to revolutionize our computers (and how much energy they consume).

Neuromorphic computing employs electronic devices that are modeled after the neurons in our brains, rather than the simple, on-off transistors of traditional computers. By combining a computer’s processing and memory storage functions into one component—a “memristor”—neuromorphic computers could eventually become more efficient and powerful than today’s computers, which are becoming limited by the size of transistors. NREL researchers are working to develop better materials for memristors, and nanomaterials are playing a leading role.

All of the nanomaterials research at NREL is underpinned by a strong commitment to basic materials research. While many nanomaterials are close to practical applications and commercialization, many others will require years of detailed study to fully understand and apply. Fortunately, NREL’s breadth of capabilities and expertise can support both. “It’s one of the benefits of our philosophy at NREL. We’re afforded the ability to span both basic and applied research,” Ferguson said.

It is this promise of new, possibly unimagined breakthroughs that excites many NREL researchers. “Nanomaterials represent a great opportunity for the development of new functional materials,” said Laura Schelhas, who manages the hybrid and nanoscale materials chemistry research group at NREL. “I believe researchers have only just begun to harness these unique properties, and we will continue to see massive growth in this area.”

Read the original article on CleanTechnica.