An insulator of sulfur and selenium made with flexible devices in mind may have found its true destiny: As an anticorrosive coating for steel.

The compound developed by the Rice University lab of materials scientist Pulickel Ajayan proved itself more dielectric (insulating) than most flexible materials and more flexible than most dielectrics, making it a good candidate for components in electronics like bendable cellphones.

At the same time, the material had its creators thinking: What else can it do?

“Even before we reported on the material for the first time, we were looking for more applications,” said materials scientist Muhammad Rahman, principal investigator on the study and an assistant research professor of materials science and nanoengineering in the George R. Brown School of Engineering.

“So we thought, let’s put it in salt water and see what happens,” he said.

“Atop all that, we found the viscoelastic coating is self-healing,” said Rice graduate student and co-lead author M.A.S.R. Saadi.

The results of experiments at Rice and the South Dakota School of Mines and Technology, found in Advanced Materials, could be a boon for infrastructure -- buildings, bridges and anything above or below the water made of steel -- that requires protection from the elements.

An illustration shows the simple process of combining powdered sulfur and selenium into a compound able to protect mild steel from the elements.

The researchers pointed out that sulfur-selenium combines the best properties of inorganic coatings like zinc- and chromium-based compounds that bar moisture and chlorine ions but not sulfate-reducing biofilms, and polymer-based coatings that protect steel under abiotic conditions but are susceptible to microbe-induced corrosion.

In the first test of the material, the lab coated small slabs of common “mild steel” with the sulfur-selenium alloy and, with a plain piece of steel for control, sank both into seawater for a month. The coated steel showed no discoloration or other change, but the bare steel rusted significantly, they reported. The coating proved highly resistant to oxidation while submerged.

To test against sulfate-reducing bacteria, which are known to accelerate corrosion up to 90 times faster than abiotic attackers, coated and uncoated samples were exposed for 30 days to plankton and biofilms. The researchers calculated an “inhibition efficiency” for the coating of 99.99%.

The Rice compound also performed well compared to commercial coatings with a similar thickness of about 100 microns, easily adhering to steel while warding off attackers.

Finally, they tested the alloy’s self-healing properties by cutting a film in half and placing the pieces next to each other on a hotplate. The separated parts reconnected into a single film in about 2 minutes when heated to about 70 degrees Celsius (158 degrees Fahrenheit) and could be folded just like the original film. Pinhole defects were healed by heating them at 130 C (266 F) for 15 minutes.

Subsequent tests with the healed alloys proved their ability to protect steel just as well as pristine coatings. 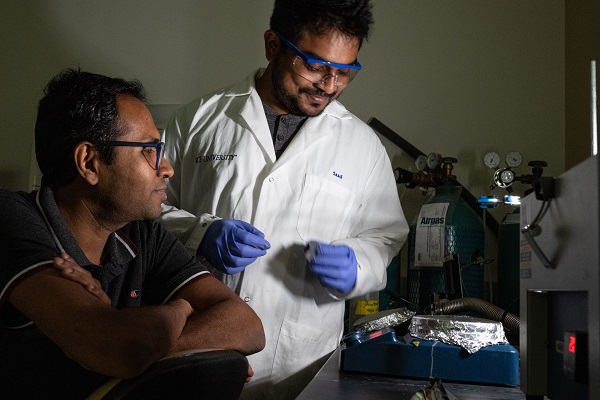 “If you give the alloy a poke, it recovers,” Rahman said. “If it needs to recover quickly, we assist it using heat. But over time, most thick samples will recover on their own.” He said the lab still needs to test whether thin layers of about 100 microns will heal without assistance.

The lab is tweaking the material for varieties of steel and looking into coating techniques. “The first target is structures, but we’re aware the electronics industry faces some of the same problems with corrosion,” Ajayan said. “There are opportunities.”