Space missions, such as NASA's Orion that will take astronauts to Mars, are pushing the limits of human exploration. But during their transit, spacecrafts encounter a continuous stream of damaging cosmic radiation, which can harm or even destroy onboard electronics.

To extend future missions, researchers reporting in ACS Nano show that transistors and circuits with carbon nanotubes can be configured to maintain their electrical properties and memory after being bombarded by high amounts of radiation. 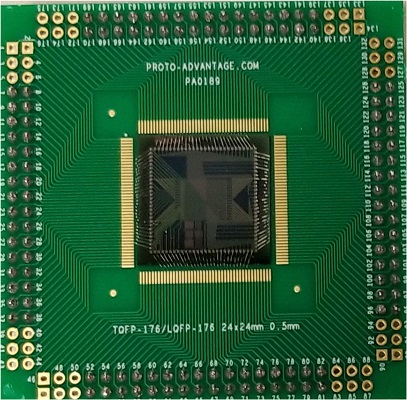 A memory chip was made of transistors with carbon nanotubes that maintained their electrical properties and memory after being bombarded by high amounts of radiation.

The lifetime and distance of deep space missions are currently limited by the energy efficiency and robustness of the technology driving them. For example, harsh radiation in space can damage electronics and cause data glitches, or even make computers break down completely. One possibility is to include carbon nanotubes in widely used electronic components, such as field-effect transistors. These single-atom-thick tubes are expected to make transistors more energy efficient compared to more run-of-the-mill silicon-based versions.

In principle, the ultra-small size of the nanotubes should also help reduce the effects that radiation would have when striking memory chips containing these materials. However, the radiation tolerance for carbon nanotube field-effect transistors has not been widely studied. So, Pritpal Kanhaiya, Max Shulaker and colleagues wanted to see if they could engineer this type of field-effect transistor to withstand high levels of radiation, and build memory chips based on these transistors.

To do this, the researchers deposited carbon nanotubes on a silicon wafer as the semiconducting layer in field-effect transistors. Then, they tested different transistor configurations with various levels of shielding, consisting of thin layers of hafnium oxide and titanium and platinum metal, around the semiconducting layer. The team found that placing shields both above and below the carbon nanotubes protected the transistor's electrical properties against incoming radiation up to 10 Mrad—a level much higher than most silicon-based radiation-tolerant electronics can handle. When a shield was only placed beneath the carbon nanotubes, they were protected up to 2 Mrad, which is comparable to commercial silicon-based radiation-tolerant electronics.

Finally, to achieve a balance between fabrication simplicity and radiation robustness, the team built static random-access memory (SRAM) chips with the bottom shield version of the field-effect transistors. Just as with experiments performed on the transistors, these memory chips had a similar X-ray radiation threshold as silicon-based SRAM devices.

These results indicate that carbon nanotube field-effect transistors, especially double-shielded ones, could be a promising addition to next-generation electronics for space exploration, the researchers say.