Researchers reported a conductive membrane, which translated sound waves into matching electrical signals when implanted inside a model ear, without requiring external power.

Some people are born with hearing loss, while others acquire it with age, infections or long-term noise exposures. In many instances, the tiny hairs in the inner ear’s cochlea that allow the brain to recognize electrical pulses as sound are damaged. As a step toward an advanced artificial cochlea, researchers in ACS Nano report a conductive membrane, which translated sound waves into matching electrical signals when implanted inside a model ear, without requiring external power.

When the hair cells inside the inner ear stop working, there’s no way to reverse the damage. Currently, treatment is limited to hearing aids or cochlear implants. But these devices require external power sources and can have difficulty amplifying speech correctly so that it’s understood by the user. One possible solution is to simulate healthy cochlear hairs, converting noise into the electrical signals processed by the brain as recognizable sounds.

However, the devices aren’t easy to make and don’t produce enough signal across the frequencies involved in human speech. So, Yunming Wang and colleagues wanted a simple way to fabricate a material that used both compression and friction for an acoustic sensing device with high efficiency and sensitivity across a broad range of audio frequencies. 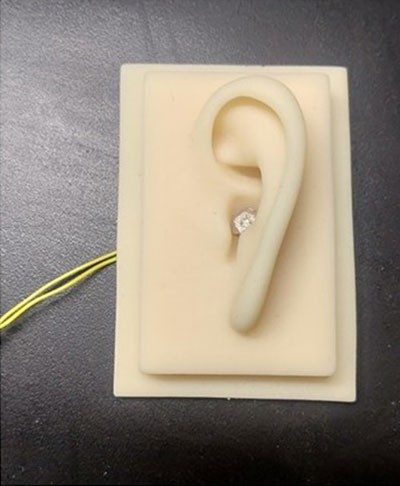 An electrically conductive membrane implanted inside a model ear simulates cochlear hairs by converting sound waves into electrical pulses; wiring connects the prototype to a device that collects the output current signal.

To create a piezo-triboelectric material, the researchers mixed barium titanate nanoparticles coated with silicon dioxide into a conductive polymer, which they dried into a thin, flexible film. Next, they removed the silicon dioxide shells with an alkaline solution. This step left behind a sponge-like membrane with spaces around the nanoparticles, allowing them to jostle around when hit by sound waves.

In tests, the researchers showed that contact between the nanoparticles and polymer increased the membrane’s electrical output by 55% compared to the pristine polymer. When they sandwiched the membrane between two thin metal grids, the acoustic sensing device produced a maximum electrical signal at 170 hertz, a frequency within the range of most adult’s voices.

Finally, the researchers implanted the device inside a model ear and played a music file. They recorded the electrical output and converted it into a new audio file, which displayed a strong similarity to the original version. The researchers say their self-powered device is sensitive to the wide acoustic range needed to hear most sounds and voices.