Exotic Magnetic States on the Nanoscale

We are all used to the idea that simple units combine to form more complex structures. So atoms combine to form molecules, which in turn combine to form cells, and cells form tissue, ultimately giving rise to living beings. In the quantum world, this process may take place in reverse in such a way that the interaction between complex particles results in simpler particles. So, under certain circumstances, the interaction between electrons, indivisible particles with electric charge e, gives rise to the emergence of particles with charge e/3. This phenomenon is known as fractionalization.

All elementary particles have intrinsic properties such as mass or charge that are intuitive to us, and others such as spin, which can be visualised like a compass. However, unlike normal compasses, which can point in any direction, the spin of quantum systems is quantized, and can only assume a discrete set of values. For example, we say that the spin of an electron is ½ and can only take two values. Particles with spin 1 can take three values.

In the 1980s the British physicist Duncan Haldane built a mathematical model for spin 1 particles in which the fractionalization of the spins took place. So when a one-dimensional chain of indivisible spin 1 particles interacted with their neighbours, they gave rise to the emergence of spin ½ particles on the edges of the chain. Like the magic trick in which the magician saws a person in half and pulls the two halves apart, the Haldane model allows spins 1 to be fractionalized and separated. It is one of the core models of quantum magnetism, and his work earned him the Nobel Prize in 2016. 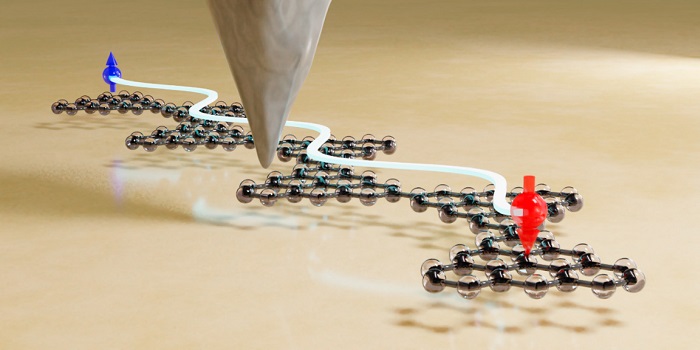 Artistic rendering of a triangulene quantum spin chain adsorbed on a gold surface and probed with the sharp tip of a scanning tunneling microscope. While each triangulene unit (triangular nanographenes) has a total spin of 1, quantum correlations in the chain lead to spin fractionalization, such that the terminal triangulene units exhibit a spin of ½.

Experimental confirmation of this prediction was challenging for various reasons, chief among them being the fact that one-dimensional materials do not exist. Indirect evidence of the phenomenon of spin fractionalization in organometallic materials containing chains of magnetic atoms existed, but direct observation remained elusive. Now, however, that observation has been made by an international team of researchers, including the Ikerbasque researcher David Jacob of the Department of Polymers and Advanced Materials: Physics, Chemistry and Technology at the UPV/EHU; he has collaborated in this work with the International Iberian Nanotechnology Laboratory (INL), the University of Alicante, the Swiss Federal Laboratories for Materials Science and Technology (EMPA) in Zurich and the University of Dresden.

To accomplish this difficult feat, the researchers combined organic chemistry techniques with ultra-high vacuum surface science in order to synthesise graphene molecules with spin 1 that form unidimensional chains. Using a tunnelling microscope, the team of researchers were able to study, with atomic resolution, the quantum states of the chain adsorbed on a gold surface, compare them with those predicted by the theory, and establish that the system did in fact behave like the Haldane model. In particular, in chains with a sufficiently high number of magnetic molecules, the researchers found Kondo resonances at the tips of the chain, a phenomenon that occurs when spin ½ particles interact with the electrons in a conductor such as gold.

The researchers say that this work "shows the potential for using nanographenes to form two-dimensional networks of nanomagnets, enabling predictions analogous to Haldane's to be confirmed, such as, for example, the existence of quantum states that would allow quantum computation to be carried out".