Design Could Curb Overheating, Up Performance of Soft Electronics

For some, the mere mention of liquid metal might conjure visions of T-1000: the shapeshifting, nigh-invincible villain that turns up the heat on humanity’s future savior in “Terminator 2.”

But for the University of Nebraska–Lincoln’s Eric Markvicka and colleagues, droplets of the stuff are emerging as a protagonist in the quest to dissipate heat — and prevent overheating — in wearable technology, soft robotics and other microelectronic-packed applications. 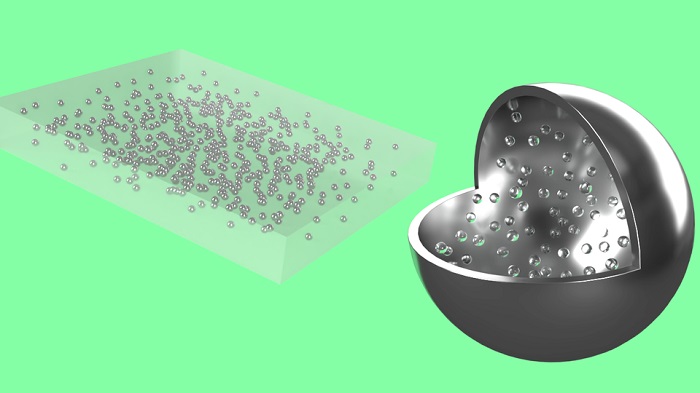 A rendering of liquid metal droplets embedded in a silicone material (left) and microscopic spheres of hollow glass enclosed in a droplet of that liquid metal (right).

Not helping? The fact that many wearable devices and other smart technologies are incorporating malleable, elastic materials that reduce weight and increase comfort but also trap heat. To address the issue, Markvicka and other engineers have tried loading the insulating materials with liquid metal droplets that naturally conduct heat and can consequently carry it away from the microelectronics that generate it.

The approach has worked, to a point. Yet at that point came a sobering realization: Though liquid metal droplets do improve thermal conductivity, their density — and the number needed to really enhance that conductivity — can also add an impractical amount of weight.

That tug-of-war between thermal conductivity and density had left engineers at something of a standstill. But in a new study, Markvicka’s team has shown that embedding a silicone material with gallium-based droplets — and, crucially, embedding those droplets with microscopic spheres of hollow glass — can mostly retain the boost in heat dissipation without sacrificing the material’s lightweight pliability.

“It is still soft and rubbery but has a thermal conductivity approaching (that of) some rigid metals, like titanium or stainless steel, with approximately half the density of those metals,” Markvicka said. “This combination of properties makes the material unique and interesting.”

While experimenting with the glass microspheres, the researchers tested versions of the silicone whose liquid metal droplets housed varying volumes of the hollow glass, from 0% up to 50%. The 50% increase in volume led to a 35% decrease in the material’s overall density and just a 14% drop in thermal conductivity, the latter of which was already starting from a higher baseline than in silicone lacking the liquid metal.

That achievement, in itself, was enough to get the engineers celebrating. Markvicka, doctoral advisee Ethan Krings and their colleagues weren’t done, though. With the aid of prior modeling work, the Nebraska team then developed what Markvicka described as a “contour map” to guide the future tailoring of soft materials that rely on the team’s Russian nesting doll approach.

In developing the map, the team was formalizing what its experiments were revealing: that careful engineering can untether the normally intertwined properties of a polymer, granting unrivaled command over the material’s performance.

One axis of the map accounts for the volume of liquid metal droplets in a material; the other axis quantifies the volume of glass microspheres in the droplets. Modifying the volume of glass microspheres alone, the map showed, can alter the material’s density while leaving the thermal conductivity almost completely unchanged. Modifying the ratios of both glass and liquid metal, meanwhile, can change the thermal conductivity without affecting the density. 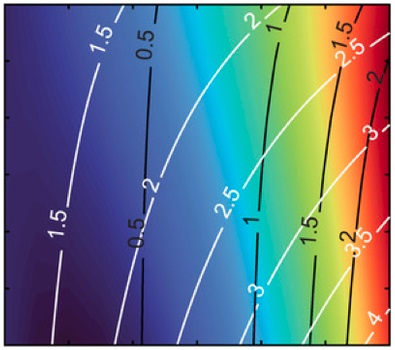 Lines indicating the proportional volumes of liquid metal and glass that will maintain a constant thermal conductivity (black) and constant density (white) in soft composite materials.

“So we’ve been able to show that we can now independently control thermal conductivity and density in these composites, which has never been shown before,” said Markvicka, whose team detailed its proof of concept in the journal Small.

The researchers further demonstrated that control by fabricating several silicone versions of the university’s Nebraska N. Each version had a different density, as evidenced by the fact that the densest sank to the bottom of a liquid-filled cylinder, the least-dense floated at the top, and a moderately dense version floated between the two. Despite their varying densities, the N’s dissipated heat at roughly the same rate when electricity was conducted through a heating element implanted in each. 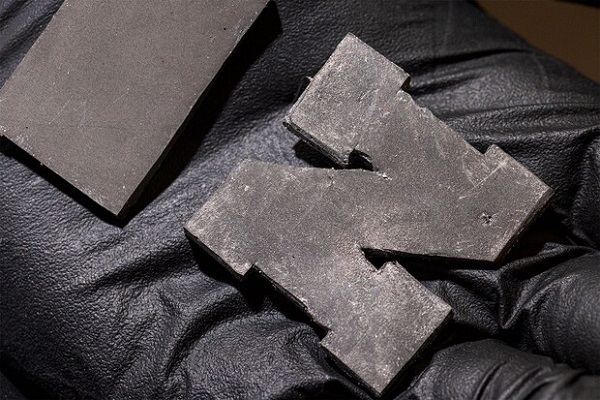 One of the Nebraska N’s that the team fabricated to test the relationship between thermal conductivity and density in its custom-made material.

Markvicka sees myriad ways that a soft but thermally conductive material could benefit emerging technology. For starters, he said, it could help alleviate limitations on the computing power of microelectronics that are squeezed into wearable technology, smoothing the path to faster devices with more functionality.

Engineers of larger-scale digital technology, including computers and gaming consoles, might also find it useful when crafting so-called interface materials that carry substantial amounts of heat from, say, processors to liquid coolants. The PlayStation 5 console, for instance, already uses liquid metal for that very purpose.

Beyond that lie the obvious applications in thermoregulatory garments, Markvicka said, which can monitor a wearer’s skin temperature, then supply or remove heat accordingly.

“A lot of the big tool companies have these heated jackets and gear to help workers stay warm in cold environments,” he said. “This material could function as a passive heat spreader to achieve more uniform heating throughout a jacket and eliminate hot spots, without restricting the motion of the wearer.

“Anything the human body interacts with, there could be applications for this material.”