Researchers have developed an ultra-stable amorphous Ta2O5/C nanocomposite with a hollow multishelled structure (HoMS) for solar evaporation, which can improve the efficiency of water purification.

Solar-thermal interfacial evaporation has been considered the most promising strategy for addressing this problem. However, developing an optimized material featuring both efficient solar-vapor conversion and good environmental tolerance still remains challenging. 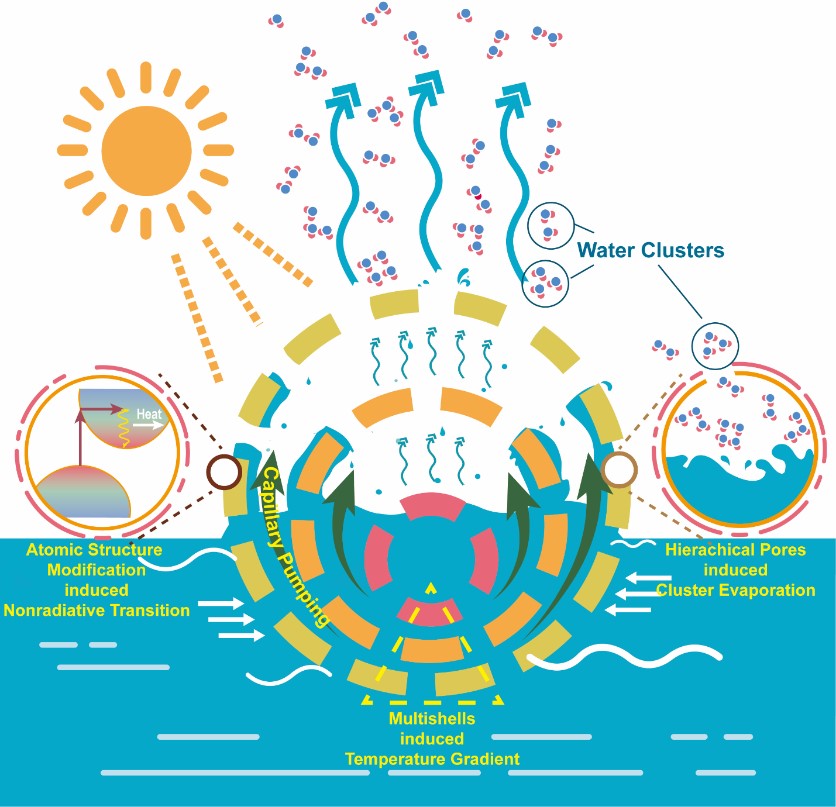 Researchers from the Institute of Process Engineering (IPE) of the Chinese Academy of Sciences (CAS) have developed an ultra-stable amorphous Ta2O5/C nanocomposite with a hollow multishelled structure (HoMS) for solar evaporation, which can improve the efficiency of water purification.

The study was published in Advanced Materials on Oct. 29.

"The precise atomic and composition control in the building block of HoMS realizes an indirect bandgap structure with abundant energy states around the Fermi level, which enhances nonradiative relaxation to facilitate photothermal conversion," said Prof. WANG Dan, the corresponding author of the study, "The unique hollow multishelled structure can efficiently enhance light absorption like a blackbody."

With highly efficient photoabsorption and photothermal conversion, a super-fast evaporation speed of 4.02 kg m-2 h-1 has been achieved. The evaporation speed barely changed after 30 days, and with no salt accumulation, indicating a long-term stability.

Notably, the concentration of pseudovirus SC2-P could be decreased by six orders of magnitude after evaporation.

This amorphous Ta2O5/C composite is readily fabricated, carried, stored, and recycled. It can be applied to the purification of seawater, or to heavy metal- or bacteria-containing water, obtaining drinkable water that meets the standard of the World Health Organization.

The scientists from IPE are preparing a prototype of seawater desalination for the residents on isolated islands.