Researchers from Osaka University and Osaka City University synthesize and crystallize a molecule that is otherwise too unstable to fully study in the laboratory, and is a model of a revolutionary class of magnets

Since the first reported production in 2004, researchers have been hard at work using graphene and similar carbon-based materials to revolutionize electronics, sports, and many other disciplines. Now, researchers from Japan have made a discovery that will advance the long-elusive field of nanographene magnets.

In a study published in Journal of the American Chemical Society, researchers from Osaka University and collaborating partners have synthesized a crystalline nanographene with magnetic properties that have been predicted theoretically since the 1950s, but until now have been unconfirmed experimentally except at extremely low temperatures. 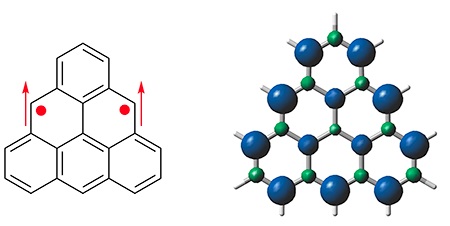 Graphene is a single layer, two-dimensional sheet of carbon rings arranged in a honeycomb lattice. Why does graphene excite researchers? Graphene has impressive properties – it exhibits efficient, long-distance charge transport and has a much higher strength than similarly thick steel.

Nanostructures of graphene have edges that exhibit magnetic and electronic properties that researchers would like to exploit. However, graphene nanosheets are difficult to prepare and it's difficult to study their zigzag edge properties.

Overcoming these challenges by using a simpler, yet advanced, model system known as triangulene is something the researchers at Osaka University aimed to address.

“Triangulene has long eluded synthesis in a crystalline form because of its uncontrolled polymerization,” say both Shinobu Arikawa and Akihiro Shimizu, two key authors of the study. “We prevented this polymerization by steric protection – bulking up the molecule—and did so in a way that didn’t affect its underlying properties.”

The researchers’ triangulene derivative is stable at room temperature but must be kept in an inert atmosphere because it slowly degrades when exposed to oxygen. Nevertheless, crystallization was possible – which enabled confirmation of its theoretically predicted properties, such as localization of unpaired electrons on the zigzag edges of the molecule.

“By measuring its optical and magnetic properties, we confirmed that our molecule is in the triplet ground state,” explains Ryo Shintani, senior author. “This is an electronic state that can serve as an experimentally tractable model for zigzag-edged nanographene.”

These results have important applications. Researchers can extend the long-sought synthetic procedure reported here to increase the number of carbon rings in the molecule and perform chemical syntheses of advanced forms of nanographene. In so doing, Osaka University and Osaka City University researchers may be able to synthesize materials that are foundational for future advanced electronics and magnets, and supplement the silicon that’s ubiquitous in modern electronics.

Getting Quantum Dots to Stop Blinking

Virtual Fluid for the Description of Interfacial Effects in Metallic Materials