Theoretically, it only takes less than 450 grams of this material to lift an elephant: "Aerographene" owes this ability to its unique structure at the nano level. Visually similar to a black foam, it actually consists of a finely-structured tubular network based on graphene with numerous cavities. This makes it extremely stable, conductive and almost as lightweight as air. An international research team led by materials scientists from Kiel University (CAU) has now taken a major step toward practical applications. They have succeeded in repeatedly heating and cooling aerograph and the air contained inside to very high temperatures in an extremely short period of time. This enables extremely powerful pumps, compressed air applications or sterilizing air filters in miniature. The article appeared as the cover story in the current issue of the renowned scientific journal Materials Today.

"When we first introduced these materials, they were the lightest class of materials in the world to date, with a density of just 0.2 milligrams per cubic centimeter. Because that's practically air, we called them ‘aeromaterials’", recalls Rainer Adelung. The professor for Functional Nanomaterials at CAU had developed the materials, which were first presented in 2012, together with colleagues from Hamburg University of Technology. The fascinating properties of aeromaterials generated worldwide interest and have been intensively researched since then, for example in the major European research initiative “Graphene Flagship".

This new study provides a contribution to how aeromaterials could get from basic research to application. The material scientists from Kiel, together with colleagues from Technische Universität Dresden, University of Southern Denmark, University of Trento, Queen Mary University of London, has discovered further properties that enable innovations in pneumatics, robotics or air filter technology. 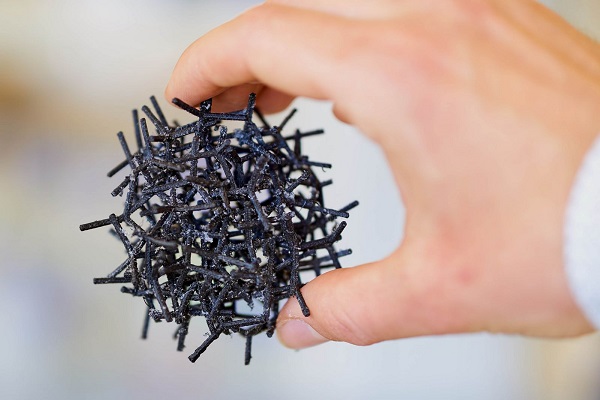 The model shows the filigree internal structure, a network of graphene tubes that makes aerographene so lightweight and conductive.

"Aerographene" can be heated up and cooled down very fast

"In our experiments, we have found that Aeromaterials made from graphene and other conductive nanomaterials, can be electrically heated extremely quickly with up to several hundred degrees per millisecond due to their low density," explains Dr. Fabian Schütt from CAU, who led and conducted the experiments together with Dr. Florian Rasch. To do so, the materials scientists used the "aerographene" aeromaterial, which consists of just a few layers of carbon atoms and 99.9% air. When heated, this air contained inside the material is also heated extremely quickly and expands. In the case of very rapid heating, there is an expansion in volume and one speaks of an "explosion." "This means we are now able to use aerographene to start small controllable and repeatable explosions that do not require a chemical reaction," says Schütt, summarizing their findings.

That's because almost as quickly as it heats up, aerographene cools down again as soon as the power supply is switched off. "It can hardly store any heat due to its extremely low heat capacity. Via its network structure it releases it very quickly back into the containing air," Schütt continues. The rapid heating and cooling of the material enables the researchers to start several explosions per second, one after the other. "This gives us extremely powerful compressed air at the push of a button, without the compressors and gas supplies that are otherwise required," Adelung explains. 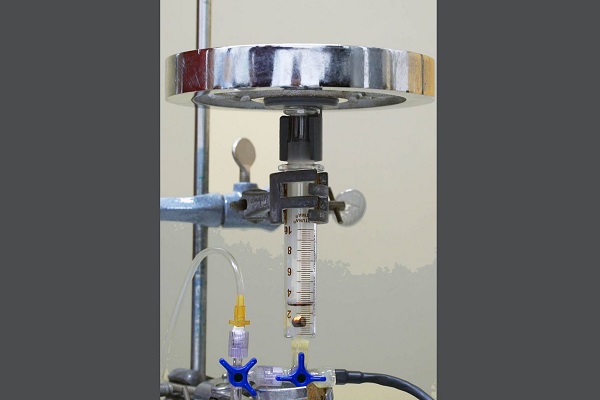 As a research team led by material scientists from CAU has now discovered, a few milligrams of aerographene (at the bottom of the pressure cylinder in the picture), for example, are enough to lift a weight of 2 kilograms - by a blast of air generated when the material is heated.

The scientists use this effect to develop new pumps that can be specifically adjusted as well as high-performance actuators in miniature format. "If you place the aeromaterial in a pressure cylinder and heat it with electricity, the generated air blast can be used to move objects up and down in a targeted manner and several times per second," explains Rasch, who recently completed his doctoral thesis on this subject. In their experiments, the two first authors, Schütt and Rasch, were able to show that even a small amount of aerographene objects that are many times heavier can be moved. For example, 10 milligrams of aerographene were enough to lift a two-kilogram weight in just a few milliseconds. So the actuators developed with aerographene have high power densities while maintaining large volume changes.

"In contrast to chemical reactions, these small electrical explosions can be controlled very specifically and also are very clean. By changing the duration and strength of the current supply we can precisely control the frequency and strength of the air blasts," says Rasch. Thanks to the extreme conductivity of aeromaterials, they need only a small amount of electricity for this. In the experiments carried out in Kiel, the material has withstood 100,000 cycles so far, and a patent has already been filed.

The research team's new experiments show that aeromaterials can be heated up and cooled down again extremely quickly. This could enable innovative applications in pneumatics, robotics or air filter technology. 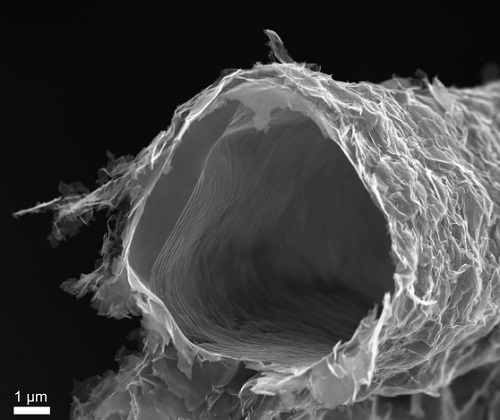 The electron microscope reveals the hollow tubes, only a few atomic layers thick, that make up aerographs.

As one example for applications, Adelung's research group is currently developing new air filter materials and systems based on aerographene in cooperation with the German aviation supplier Lufthansa Technik and funded by the Graphene Flagship. "Air currents can be guided very well through the open network structure of the material and can be heated strongly for a short time. In this way, bacteria and viruses, for example, can be filtered out of the air and killed," Adelung said. "This could allow these filter systems to function self-cleaning and work without expensive maintenance in the future."