The new molecule can improve the yield of reactions for generating pharmaceuticals and other useful compounds.

By mimicking photosynthesis, the light-driven process that plants use to produce sugars, MIT researchers have designed a new type of photocatalyst that can absorb light and use it to drive a variety of chemical reactions.

The new type of catalyst, known as a biohybrid photocatalyst, contains a light-harvesting protein that absorbs light and transfers the energy to a metal-containing catalyst. This catalyst then uses the energy to perform reactions that could be useful for synthesizing pharmaceuticals or converting waste products into biofuels or other useful compounds. 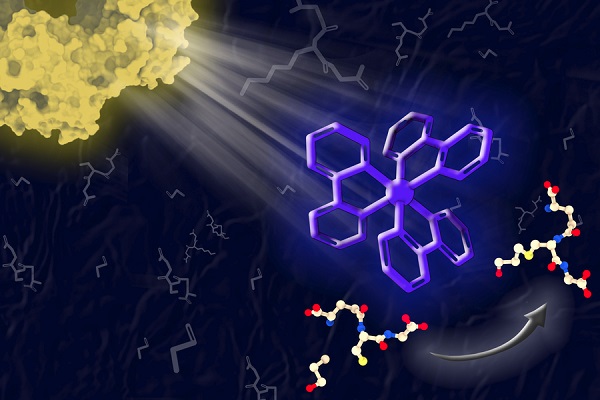 By mimicking photosynthesis, MIT researchers have designed a new type of photocatalyst that can absorb light and use it to help catalyze a variety of chemical reactions that would otherwise be difficult to perform.

“By replacing harmful conditions and reagents with light, photocatalysis can make pharmaceutical, agrochemical, and fuel synthesis more efficient and environmentally compatible,” says Gabriela Schlau-Cohen, an associate professor of chemistry at MIT and the senior author of the new study.

Working with colleagues at Princeton University and North Carolina State University, the researchers showed that the new photocatalyst could significantly boost the yield of the chemical reactions they tried. They also demonstrated that unlike existing photocatalysts, their new catalyst can absorb all wavelengths of light.

MIT graduate student Paul Cesana is the lead author of the paper, which appears in the journal Chem. 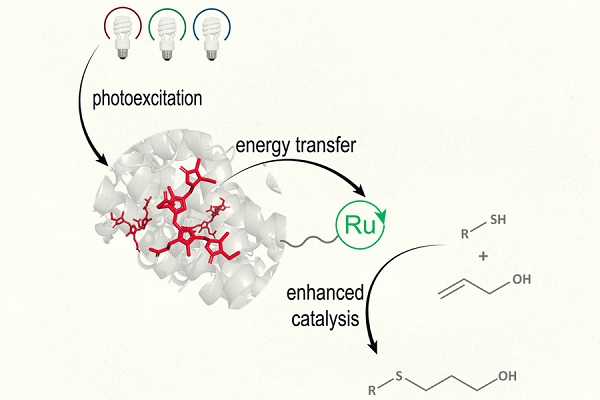 This schematic of the new type of catalyst shows that photoexcitation of pigments (red) at any wavelength leads to energy transfer (green), which can catalyze reactions.

Most catalysts speed up reactions by lowering the energy barrier needed for the reaction to occur. In the past 20 years or so, chemists have made great strides in developing photocatalysts — catalysts that can absorb energy from light. This allows them to catalyze reactions that couldn’t occur without that extra input of energy.

“In photocatalysis, the catalyst absorbs light energy to go to a much more highly excited electronic state. And through that energy, it introduces reactivity that would be prohibitively energy-intensive if all that were available were ground-state energy,” Schlau-Cohen says.

This is analogous to what plants do during photosynthesis. Plant cells’ photosynthetic machinery includes light-absorbing pigments such as chlorophyll that capture photons from sunlight. This energy is then transferred to other proteins that store the energy as ATP, and that energy is then used to produce carbohydrates.

In previous work on photocatalysts, researchers have used one molecule to perform both the light absorption and catalysis. This approach has limitations, because most of the catalysts used can only absorb certain wavelengths of light, and they don’t absorb light efficiently.

“When you have one molecule that needs to do the light harvesting and the catalysis, you can’t simultaneously optimize for both things,” Schlau-Cohen says. “It’s for that reason that natural systems separate them. In photosynthesis, there’s a dedicated architecture where some proteins do the light harvesting and then funnel that energy directly to the proteins that do the catalysis.”

To create their new biohybrid catalyst, the researchers decided to mimic photosynthesis and combine two separate elements: one to harvest light and another to catalyze the chemical reaction. For the light-harvesting component, they used a protein called R-phycoerythrin (RPE), found in red algae. They attached this protein to a ruthenium-containing catalyst, which has been previously used for photocatalysis on its own.

Working with North Carolina State University researchers led by professor of chemistry Felix Castellano, Schlau-Cohen’s lab showed that the light-harvesting protein could effectively capture light and transfer it to the catalyst. Then, Princeton University researchers led by David MacMillan, a professor of chemistry and a recent recipient of the Nobel Prize in chemistry, tested the performance of the catalyst in two different types of chemical reactions. One is a thiol-ene coupling, which joins a thiol and an alkene to form a thioether, and the other replaces a leftover thiol group with methyl after peptide coupling.

The Princeton team showed that the new biohybrid catalyst could boost the yield of these reactions up to tenfold, compared to the ruthenium photocatalyst on its own. They also found that the reactions could occur under illumination with red light, which has been difficult to achieve with existing photocatalysts and is beneficial because it produces fewer unwanted side reactions and is less damaging to tissue, so it could potentially be used in biological systems.

This improved photocatalyst could be incorporated into chemical processes that use the two reactions tested in this study, the researchers say. Thiol-ene coupling is useful for creating compounds used in protein imaging and sensing, drug delivery, and biomolecule stability. As one example, it is used to synthesize lipopeptides that may enable easier uptake of antigen vaccine candidates. The other reaction the researchers tested, cysteinyl desulfurization, has many applications in peptide synthesis, including the production of enfurvitide, a drug that could be used to treat HIV.

This type of photocatalyst could also potentially be used to drive a reaction called lignin depolymerization, which could help to generate biofuels from wood or other plant materials that are difficult to break down.

The researchers now plan to try swapping in different light harvesting proteins and catalysts, to adapt their approach for a variety of chemical reactions.

“We did a proof of principle where you can separate light harvesting and catalytic function. Now we want to think about varying the catalytic piece and varying the light-harvesting piece to expand that toolkit, to see if this approach can work in different solvents and in different reactions,” Schlau-Cohen says.

This work was supported as part of the Bioinspired Light-Escalated Chemistry (BioLEC) Energy Frontier Research Center, funded by the U.S. Department of Energy Office of Science.