Virtual Fluid for the Description of Interfacial Effects in Metallic Materials

Research group with participation of the University of Stuttgart presents a new simulation method for describing the attachment of a liquid to a surface.

Liquids containing ions or polar molecules are ubiquitous in many applications needed for green technologies such as energy storage, electrochemistry or catalysis. When such liquids are brought to an interface such as an electrode – or even confined in a porous material –  they exhibit unexpected behavior that goes beyond the effects already known.

Recent experiments have shown that the properties of the employed material, which can be insulating or metallic, strongly influence the thermodynamic and dynamic behavior of these fluids.

To shed more light on these effects, physicists at the University of Stuttgart, Université Grenoble Alpes and Sorbonne Université Paris have developed a novel computer simulation strategy using a virtual fluid that allows the electrostatic interactions within any material to be taken into account while being computationally sufficiently efficient to study the properties of fluids at such interfaces.

The new method now made it possible for the first time to study the wetting transition at the nanoscale. This depends on whether the ionic liquid encounters a material that has insulating or metallic properties. This breakthrough approach provides a new theoretical framework for predicting the unusual behavior of charged liquids, especially in contact with nanoporous metallic structures, and has direct applications in the fields of energy storage and environment. 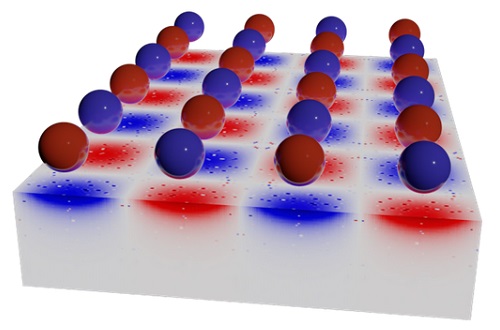 Despite their key role in physics, chemistry and biology, the behavior of ionic or dipolar liquids near surfaces – such as a porous material – remains puzzling in many respects. One of the greatest challenges in the theoretical description of such systems is the complexity of the electrostatic interactions.

For example, an ion in a perfect metal produces an inverse counter-charge, which corresponds to the negative mirror image. In contrast, no such image charges are induced in a perfect insulator because there are no freely moving electrons. However, any real, i.e., non-idealized material has properties that lie exactly between the two previously mentioned asymptotes.

Accordingly, the metallic or insulating nature of the material is expected to have a significant influence on the properties of the adjacent fluid. However, established theoretical approaches reach their limits here, since they assume either perfectly metallic or perfectly insulating materials. To date, there is a gap in the description when it comes to explaining the observed surface properties of real materials in which the mirror charges are sufficiently smeared out.

In their recent paper, published in Nature Materials, Dr. Alexander Schlaich from the University of Stuttgart et al. present a new atomic-scale simulation method that allows to describe the adsorption of a liquid to a surface while explicitly considering the electron distribution in the metallic material. While common methods consider surfaces made of an insulating material or a perfect metal, they have developed a method that mimics the effects of electrostatic shielding caused by any material between these two extremes.

The essential point of this approach is to describe the Coulombic interactions in the metallic material by a "virtual" fluid composed of light and fast charged particles. These create electrostatic shielding by reorganizing in the presence of the fluid. This strategy is particularly easy to implement in any standard atomistic simulation environment and can be easily transferred.

In particular, this approach allows the calculation of the capacitive behavior of realistic systems as used in energy storage applications. As part of the SimTech cluster of excellence at the University of Stuttgart, Alexander Schlaich is using such simulations of porous, conductive electrode materials to optimize the efficiency of the next generation of supercapacitors, which can store enormous power density.

The wetting behavior of aqueous salt solutions in realistic porous materials is also the focus of his contribution to the Stuttgart Collaborative Research Center 1313 "Interface-driven multi-field processes in porous media – flow, transport and deformation," which also investigates precipitation and evaporation processes related to soil salinization. The developed methodology is thus relevant for a wide range of systems, as well as for further research at the University of Stuttgart.

Read the original article on University of Stuttgart.