Getting Quantum Dots to Stop Blinking

New approach solves a persistent problem of intermittency that has hindered use of the tiny light emitters for biological imaging or quantum photonics.

Quantum dots, discovered in the 1990s, have a wide range of applications and are perhaps best known for producing vivid colors in some high-end televisions. But for some potential uses, such as tracking biochemical pathways of a drug as it interacts with living cells, progress has been hampered by one seemingly uncontrollable characteristic: a tendency to blink off at random intervals. That doesn’t matter when the dots are used in the aggregate, as in TV screens, but for precision applications it can be a significant drawback.

Now, a team of chemists at MIT has come up with a way to control this unwanted blinking without requiring any modification to the formulation or the manufacturing process. By firing a beam of mid-infrared laser light for an infinitesimal moment — a few trillionths of a second — the quantum dot’s blinking is eliminated for a relatively long period, tens of billions of times longer than the laser pulse.

The new technique is described in a paper appearing today in the journal Nature Nanotechnology, by doctoral students Jiaojian Shi, Weiwei Sun, and Hendrik Utzat, professors of chemistry Keith Nelson and Moungi Bawendi, and five others at MIT.

Quantum dots are tiny particles, just a few nanometers across, made of semiconductor material, which has a “bandgap” between the energy levels of its electrons. When such materials gain energy from light shining on them, electrons can jump to a higher energy band; when they revert to their previous level, energy is released in the form of a photon, a particle of light. The frequency of this light, which determines its color, can be precisely tuned by selecting the shapes and dimensions of the dots. Besides display screens, quantum dots have potential for uses as solar cells, transistors, lasers, and quantum information devices. 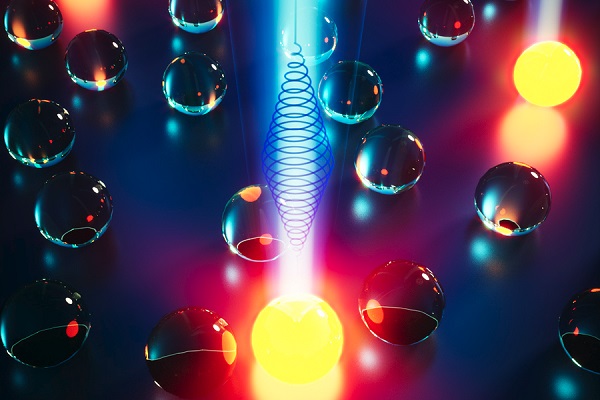 MIT chemists have come up with a way to control the unwanted blinking of quantum dots, depicted here as yellow spheres, without requiring any modification to the formulation or the manufacturing process.

The blinking phenomenon was first observed in the 1990s, soon after quantum dots were first made. “From that time on,” Bawendi says, “I would give presentations [about quantum dots], and people would say, ‘just make this go away!’ So, a lot of effort went into trying to eliminate it by engineering the interface between the dot and its environment, or by adding other molecules. But none of these things really worked well or were very reproducible.”

“We know that for some quantum information applications, we want a perfect single-photon emitter source,” Sun explains. But with currently available quantum dots, which otherwise might be well-suited to such applications, “they will turn on off randomly, and this is actually detrimental for any of the applications that utilize the photoluminescence from the dots.”

But now, she says, thanks to the team’s research, “we use these ultra-fast mid-infrared pulses, and the quantum dots can stay in the ‘on’ state. This can potentially be very useful for applications, like in quantum information science, where you really need a bright source of single photons without any intermittency.”

Similarly, for biomedical research applications, eliminating the blinking is essential, Shi says. “There are many biological processes that really require visualization with a steady photoluminescent tag, like tracking applications. For example, when we take medicines, you want to visualize how those drug molecules are being internalized in the cell, and where in the subcellular organelles it ends up.” This could lead to more efficient drug-discovery processes, he says, “but if the quantum dots start blinking a lot, you basically lose track of where the molecule is.”

Nelson, who is the Haslam and Dewey Professor of Chemistry, explains that the cause of the blinking phenomenon probably has to do with extra electrical charges, such as extra electrons, attaching to the outer part of the quantum dots, altering the surface properties so that there are other alternative pathways for the extra energy to be released instead of by emitting light.

“Various things can happen in a real environment,” Nelson says, “such that perhaps the quantum dot has an electron glommed onto it somewhere at the surface.” Instead of being electrically neutral, the quantum dot now has a net charge, and while it can still return to its ground state by emitting a photon, “the extra charge unfortunately also opens up a whole bunch of additional pathways for the electron’s excited state to return to the ground state without emitting a photon,” for example by shedding heat instead.

But when zapped with a burst of mid-infrared light, the extra charges tend to get knocked off the surface, allowing the quantum dots to produce stable emissions and stop their blinking.

It turns out, Utzat says, that this is “a very general process,” which might turn out to be useful for dealing with anomalous intermittency in some other devices, such as in so-called nitrogen vacancy centers in diamond, which are being harnessed for ultra-high-resolution microscopy and as sources of single-photons in optical quantum technologies. “Even though we have shown it for only one kind of workhorse material, the quantum dot, I believe that we can apply this method to other emitters,” he says. “I think the fundamental effect of using this mid-infrared light is applicable to a wide variety of different materials.”

Nelson says the effect also may not be limited to the mid-infrared pulses, which currently rely on bulky and expensive laboratory laser equipment and are not yet ready for commercial applications. The same principle could also extend to terahertz frequencies, he says, an area that has been under development in his lab and others and that in principle could lead to much smaller and less expensive devices.